In order to furnish the living protoplasm with the materials necessary for energy, growth and repair, a constant supply of food must be provided. Most foods must be rendered soluble, and must undergo certain preliminary chemical changes, in order to render them suitable for absorption and assimilation by the cells of the body. For this preparation of the food-supply, the digestive system [apparatus digestorius] is provided, which includes the alimentary canal and certain accessory glands (salivary glands, liver and pancreas) . The alimentary canal is divided into a number of successive segments, varying in size and structure according to their function.

These segments include the mouth, pharynx, oesophagus, stomach, small and large intestines. 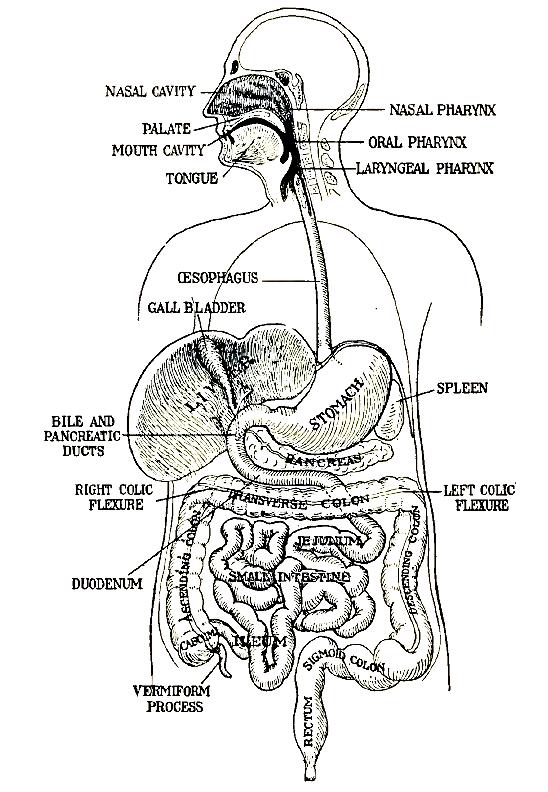 The most important layer of the tubular alimentary canal is the inner mucous memhrane [tunica mucosa]. From its epithelial lining, the various digestive glands are derived, and through it the process of absorption takes place. The epithelium is supported by a fibrous tunic [lamina propria mucosa;] beneath which is a thin layer of smooth muscle [lamina muscularis mucosae]. The layer next in importance is the muscular coat [tunica muscularis] which propels the contents along the canal. It is typically composed of two layers of smooth (involuntary) muscle, the inner circular and the outer longitudinal in arrangement. Between the mucosa and the muscularis is a loose, fibrous submucous layer [tela submucosal], which allows the folds in the mucosa to spread out when the canal is distended. Finally, there is an outer fibrous coat [tunica fibrosa], which in the abdominal cavity becomes the smooth serous coat [tunica serosa], or visceral layer of the peritoneum, which eliminates friction during movements. The variations in the structure of the alimentary canal in different regions are due chiefly to differences in the mucosa.

Since the glands form an important part of the digestive system, the classification of glands in general will be discussed briefly. A gland may be somewhat loosely defined as an organ which elaborates a definite substance which is either a waste product to be eliminated (excreted), or a secretion to be further utilized by the organism. Glands may be divided into (a) ductless glands (e. g., spleen, thyroid gland), which pour their secretions directly into the blood or lymph; and (b) glands with ducts, which open upon an epithelial surface. Some organs, however, belong in both classes (e. g., liver, pancreas).

The glands with ducts (the so-called true' glands) are always derived from an epithelial surface and may be further subdivided upon the basis of either (1) form or (2) cell-structure. According to form, glands are classified as either tubular or saccular (alveolar, acinous). Each of these may be either simple or compound (branched). The compound saccular form is often called racemose. Moreover, intermediate forms (tubulo-racemose) occur.

According to cell-structure and character of secretion, glands are divided into mucous and serous types. In the mucous type, the cells appear larger and fighter when swollen with mucus which is secreted for purposes of lubrication. The goblet cells of the intestine represent unicellular glands of this type. In the serous (or albuminous) type of glands, the cells usually appear somewhat smaller and more deeply stained, with numerous zymogen granules. The secretion is a watery, albuminous fluid, which contains the digestive enzymes. There occurs also a mixed type, with separate mucous and serous saccules, or both types of cells may occur in the same saccule (the serous cells as 'demilunes' or 'crescents'). In all cases, the epithelial gland cells are supported by a fibrous connective-tissue stroma, which provides a rich vascular and nerve-supply. 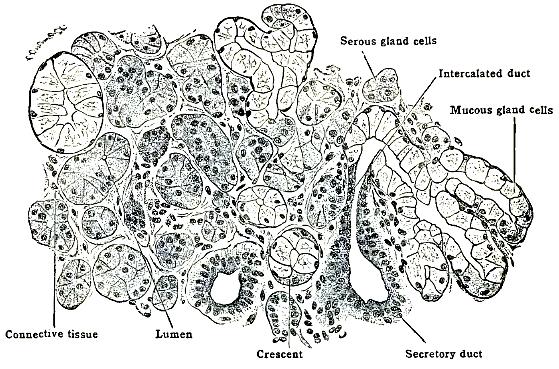 In the region of the mouth and pharynx, the digestive and respiratory systems are closely related in position, structure, function and origin. Morphologically, the head-gut represents a primitive alimentary-respiratory apparatus. 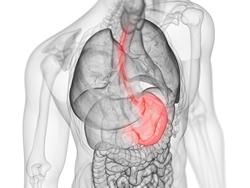 The stomach is a sac-like dilatation of the digestive tube intervening between the oesophagus and the intestine.

Numerous glands - labial, buccal, palatine and lingual - have already been mentioned, which pour their secretions into the mouth cavity. In addition to these, there are three larger pairs, the salivary glands proper. They include the parotid, the submaxillary, and the sublingual (the latter really a group of glands).

Anatomy of the palate 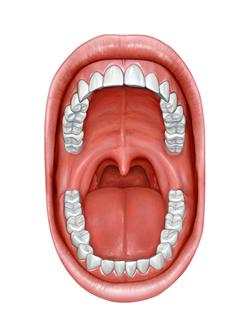 The palate (French: Le palais) forms the roof of the mouth cavity proper, and consists of two portions, the anterior or hard palate and the posterior or soft palate.

The tongue [latin: lingua; French: La langue] is a muscular organ covered with mucous membrane and located in the floor of the mouth. It is an important organ of mastication, deglutition, taste and speech. Upon its upper surface is a V-shaped groove (sulcus terminalis) indicating the division of the tongue into two parts. The larger anterior part, or body [corpus linguae] belongs to the floor of the mouth, while the smaller posterior part, or root [radix linguae], forms the anterior wall of the oral pharynx. The inferior surface (facies inferior) of the tongue is chiefly attached to the muscles of the floor of the mouth, from the hyoid bone to the mandible. Anteriorly and laterally, however, the inferior surface of the body is free and covered with mucosa. The superior surface of the body is called the dorsum. It is separated from the inferior surface by the lateral margins, which meet anteriorly at the tip [apex linguae].

Anatomy of the oral cavity

The oral cavity is the first portion of the entire digestive tract. It is an irregularly shaped, elongated cavity, situated in the lower portion of the face, and its boundaries are partly bony and partly musculocutaneous. It is divided by the two rows of teeth into two incompletely separated spaces, the vestibulum oris and the oral cavity proper.

The peritoneum, as has been shown, is a serous membrane which lines the cavity of the abdomen from the diaphragm to the pelvic floor, and invests or covers to a varying extent the viscera which that cavity contains. Viewed in its very simplest condition, it may be regarded as a closed sac, the inner surface of which is smooth, while the outer surface is rough and is attached to the tissues which surround it.

Anatomy of the stomach, dimensions, positions and relations

The stomach [Latin: ventriculus ; gaster; French: estomac] is a dilation of the alimentary canal succeeding the esophagus. In the stomach the food is mixed with the gastric juice and reduced to a viscid, pulpy liquid, the chyme [chymus], which undergoes a certain amount of digestion and absorption before passing into the duodenum.

Anatomy of The lips and cheeks

The lips [labia oris] form the anterior wall of the mouth cavity. The lower lip [labium inferius] is marked off from the chin by the sulcus mentolabialis. The upper lip [labium superius] extends upward to the nose medially and the sulcus nasolabialis laterally. The philtrum is a median groove on the upper lip extending from the septum of the nose above to the labial tubercle [tuberculum labii superioris] below, at the middle of the rima oris. On each side of the rima oris the upper and the lower lips are continuous at the angle of the mouth [angulus oris], which is usually opposite the first premolar teeth. Laterally, the lips are continuous with the cheeks [buccse], which form the lateral walls of the mouth cavity.

Read more: Anatomy of The...

The pharynx is a vertical, tubular passage, flattened anteroposteriorly, and extending from the base of the cranium above to the beginning of the esophagus below. Posteriorly, it is in contact with the bodies of the upper six cervical vertebrae.

Anatomy of the mouth

The oral cavity [cavum oris] represents the first segment of the alimentary canal. Its walls are exceedingly specialized in structure, corresponding to its manifold functions (mastication, insalivation, taste, speech, etc.).

Read more: Anatomy of the mouth