Although the foot is constructed on the same general plan as the hand, there is a marked difference in its architecture to qualify it for the different functions which it is called upon to perform. When in the erect posture, the foot forms a firm basis of support for the rest of the body, and the bones are arranged in an elliptical arch, supported on two pillars, a posterior or calcaneal pillar and an anterior or metatarsal pillar. It is convenient, however, to regard the anterior part of the arch as consisting of two segments, corresponding to the medial and lateral borders of the foot respectively. The medial segment is made up of the three metatarsal bones, the three cuneiform, the navicular, and talus; the lateral segment is made up of the fourth and fifth metatarsal bones, the cuboid, and the calcaneus, and both segments are supported behind on a common calcaneal pillar. The division corresponds to a difference in function of the two longitudinal arches. Both are intimately concerned in ordinarj- locomotion. In addition, the medial, characterised by its great curvature and remarkable elasticitj^, sustains the more violent concussions in jumping and similar actions, whereas the lateral, less curved, more rigid, and less elastic arch forms, with the pillars in front and behind, a firm basis of support in the upright posture.

Both arches are completed and maintained by strong ligaments and tendons. The weakest part is the joint between the talus and navicular bone, and special provision is accordingly made, by the addition of a strong calcaneo-navicular liga- ment, for the support of the head of the talus. This ligament is in turn supported by its union with the deltoid ligament of the ankle, and by the tendon of the tibialis posterior which passes beneath it to its insertion.

Besides being arched longitudinally, the foot presents a transverse arch formed by the metatarsal bones in front and the distal row of the tarsus behind. It is produced by the marked elevation of the central portion of the medial longitudinal arch above the ground, whereas the lateral longitudinal arch is much less raised, and at its anterior end becomes almost horizontal. Both the longitudinal and transverse arches serve the double purpose of increasing the strength and elasticity of the foot and of providing a hollow in which the muscles, nerves, and vessels of the sole may lie protected from pressure. 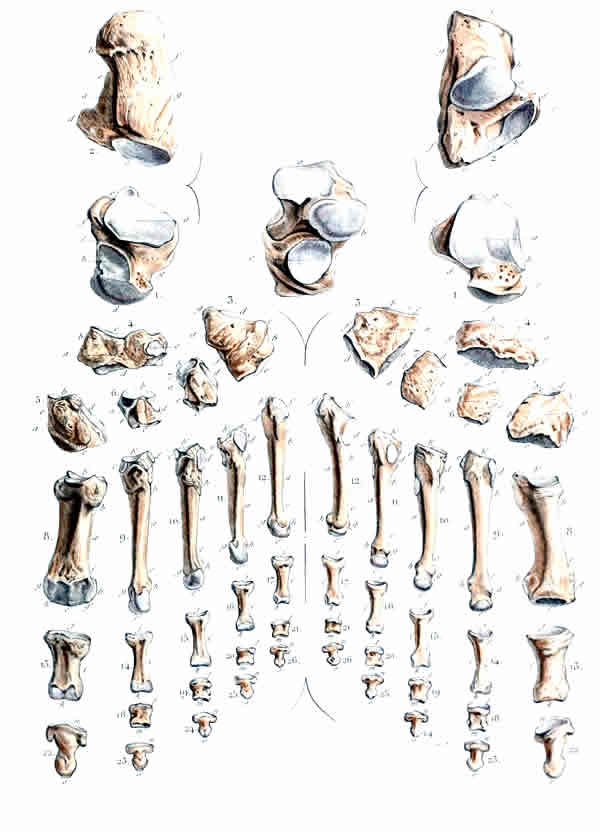 The tarsal bones [ossa tarsi] are grouped in two rows: - a proximal row, consisting of the talus and calcaneus, and a distal row, consisting of four bones which, enumerated from tibial side, are the first, second, and third cuneiform bones and the cuboid. Interposed between the two rows on the tibial side of the foot is a single bone, the navicular; on the fibular side the proximal and distal rows come into contact.

The phalanges of the foot

The phalanges of the foot are the bones of the toes, and number in all fourteen. Except the great toe, each consists of three phalanges, distinguished as first (proximal), second and third (distal) ; in the great toe the second phalanx is absent.

Read more: The phalanges of...

The metatarsus (Latin: ossa metatarsalia; French: les métatarses) consists of a series of five somewhat cylindrical bones. Articulated with the tarsus behind, they extend forward, nearly parallel with each other, to their anterior extremities, which articulate with the toes, and are numbered according to their position from great toe to small toe. Like the corresponding bones in the hand, each presents for examination a three-sided shaft, a proximal extremity termed the base, and a distal extremity or head. The shaft tapers gradually from the base to the head, and is slightly curved longitudinally so as to be convex on the dorsal and concave on the plantar aspect.