The muscles of the mouth consist, firstly, of the orbicularis oris, which is the sphincter surrounding the aperture ; and secondly, of the bands which radiate from this, as a centre, to their origin upon the adjacent facial bones. These may be grouped into three sets : viz. (1) the transverse series, which radiate transversely. This consists of only one pair of muscles, the buccinators. (2) The angular series, which pass from above or beloAv to the corner of the mouth. (3) The labial series, which pass nearly vertically either downwards or upwards to the lips, and chiefly to their inner half.

A fourth series may be added, which have no special connection with the mouth, jviz. two nearly vertical muscles close to the middle line, which radiate from an origin close to the mouth. Of these, one has already been described, the depressor lalae nasi ; the other arises from the lower jaw, the levator menti.

The muscles might also be arranged according to their stratification, for they form two, and, in some parts, three layers over the greater part of this region. 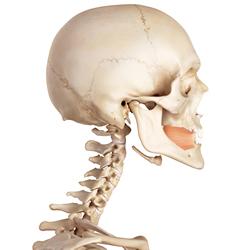 This group comprises only the buccinator muscle.

The orbicularis oris - an unpaired muscle, named from its shape and situation - is an oval sheet with the long axis placed transversely, and its fibres arranged round a transverse central aperture. Like the orbicularis oculi, the muscle may be divided into an internal or labial portion, and an external or facial. The first part, which is superficial, has no bony connection, except through the medium of the adjacent muscles with which it is closely blended. The second, which is deep and |which forms part of the third layer of the facial muscles, has the following small Ibony attachments.

Angular Muscles of the Mouth

The angular series are four in number: viz. the zygomaticus major, levator anguli oris, risorius and depressor anguli oris. Two descend to the corner of the mouth obliquely from above, one runs almost horizontally forwards, and one ascends from below. They blend at the corner of the mouth, and form there a thick, muscular mass, behind which is a depression filled up with the fat covering the buccinator. In a lean face this depression is often very conspicuous, and in some faces its position is indicated by a dimple when the zygomaticus major contracts.