The extrinsic muscles of the tongue

The tongue consists chiefly of muscular tissue, part of which arises from the adjacent bones, while the rest is made up of bands of fiber which pass longitudinally or transversely in its substance, and have no external attachment. The latter of extitrinsic muscles will be described later; the former or extrinsic muscles constitute a group which is nearly related to those which have been just described. They consist of four muscles- viz. the genio-hyo-glossus, the hyoglossus, the styloglossus, and palatoglossus.

The genio-hyo-glossus, named from its attachment to the chin, hyoid bone, and tongue, is a flat sheet forming the quadrant or more correctly, the sector of a circle, and separated from its fellow by a thin stratum of connective tissue, the septum of the tongue.

(1) The whole length of the tongue in the submucous tissue just external to the median plane, from the tip along the dorsum to the root of the tongue;

(2) the upper part of the upper and anterior surface of the body of the hyoid bone;

(3) by a few fibers into the side of the pharynx.

Structure: Its origin is by a short tendon, from which its fleshy fibers diverge in a fan-shaped sheet to their extensive insertion.

Nerve-supply: The hypoglossal, by filaments which enter its outer surface.

(1) To draw downwards and forwards the mesial portion of the tongue also as to make its dorsum concave upwards in a transverse direction;

(2) by its interior fibers to draw back the tip of the protruded tongue;

(3) by fibers which pass to the back part of the dorsum of the tongue to draw it forwards and protrude the tongue;

(4) by its lowest fibers to draw upwards and forwards the hyoid bone, and so help the genio-hyoid and anterior belly of the digastric in raising the tongue;

(5) acting from below, its hyoid portion will help in depressing the lower jaw.

Relations: Externally, the inferior lingualis and hyoglossus muscles, the ranine artery, the terminal branches of the hypoglossal and lingual gustatory nerves, the mucous membrane of the floor of the mouth, the sublingual gland, and Wharton's duct; internally, the fellow muscle and septum linguae; along its lower border, the geniohyoid muscle.

The hyoglossus, named from its attachments to the hyoid bone and tongue, is a thin square sheet.

(1) From the front of the hyoid bone near the upper border of the outer third of its body;

(2) from the upper border of all its great cornu;

(3) by a small lip from the lesser cornu.

Insertion. The submucous tissue and adjacent muscular mass of the posterior half of the tongue external to the preceding.

Structure: The fleshy fibers arise directly from the bone in a thin sheet, and ascend nearly parallel to one another. The anterior fibers, however, diverge slightly forwards, and they all, having reached the upper surface of the sides of the tongue, end round inwards, interlacing with the fibers of the palatoglossus and superficial lingualis to form a submucous cover to the tongue.

Those which arise from the lesser cornu are often described as a distinct muscle, the chondroglossus, which is separated from the rest of the muscle by some bundles which pass from the lower part of the genio-hyo-glossus to the superior constrictor.

Nerve-supply: The hypoglossal nerve, which sends filaments into its outer surface.

(1) To draw downwards the sides of the tongue, increasing its trans- verse convexity;

(2) to draw backwards the protruded tongue.

Relations: Externally, the mylohyoid, digastric, stylohyoid, and styloglossus muscles, the lingual vein, lingual gustatory and hypoglossal nerves, the submaxillary gland and Wharton's duct; deeply, the inferior lingualis, genio-hyo-glossus, middle constrictor, and part of the origin of the superior constrictor, the lingual artery, and glossopharyngeal nerve. 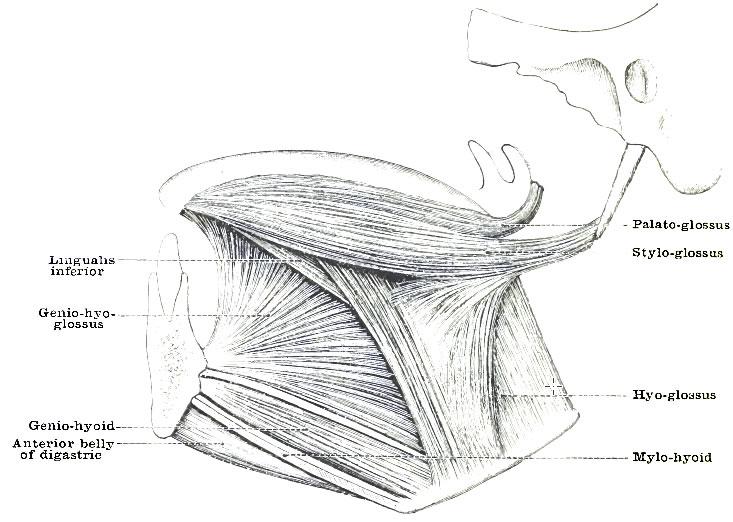 Side View of the Muscles of the Tongue.

The styloglossus, named from its attachments to the styloid process and tongue, is a long, triangular sheet.

(1) The front of the lower part and tip of the styloid process of the temporal bone;

(2) The upper part of the stylomaxillary ligament.

Insertion: The submucous tissue and subjacent muscular strata of the side of the tongue and the adjacent parts of its under the surface.

Structure: Arising by short tendinous fibers, the muscle soon develops into a long, fan-shaped, laterally compressed sheet, which passes in a long curve, with an upward concavity, forwards and slightly downwards and inwards, to the side of the tongue, where it partly overlaps and partly interlaces with the hyoglossus muscle forming with this muscle and some of the fibers of the palatoglossus a thin superficial stratum which is continued forwards to the tip of the tongue.

Nerve-supply: From the hypoglossal nerve, by filaments which enter it external surface.

(1) To draw back the tongue - for this purpose it arises from the styloid process as low as possible below the level at which the two other styloid muscles arise;

(2) to draw upwards the sides of the tongue, so as to help the genio-hyo-glossi and some of the intrinsic muscles in making its upper surface concave from side to side.

Relations: Superficially, the internal pterygoid, the parotid gland, lingual gustatory nerve, and the mucous membrane of the side of the tongue; deeply, the stylopharyngeus, hyoglossus, inferior lingualis and genio-hyo-glossus, with the glossopharyngeal nerve.

The palatoglossus, named from its attachment to the soft palate and tongue, is a somewhat cylindrical muscle which expands at either end into a thin sheet.

Origin: The under surface of the aponeurosis of the soft palate; and at he middle line its fibers are continuous with those of its fellow of the opposite side.

(1) The superficial muscular stratum which covers the side and adjacent part of the under surface of the tongue;

(2) it is partly continuous with the deep transverse lingualis muscle.

Structure: Arising in a thin, muscular sheet, its fibers form as they pass out-wards a small cylindrical bundle which, lying in front of the tonsil and against the wall of the pharynx, constitutes the anterior pillar of the fauces. This bundle runs downwards and forwards till it reaches the side of the tongue at the junction of its middle and posterior thirds. Here some of the fibers pass forwards and downwards to join the superficial stratum formed by the styloglossus and hyoglossus. The rest pass inwards towards the middle line, being continued into the deep transverse lingualis muscle. This part of the two muscles, together with the associated portion of the lingualis transversus, forms a sphincter muscle round the front part of the faucial opening.

Nerve-supply: Filaments from the pharyngeal plexus.

(1) To draw downwards the sides of the soft palate;

(2) to draw upwards and backwards the sides of the tongue. The combination of these two actions closes the front part of the faucial opening, as in the second part of swallowing, when the back of the tongue comes into contact with the soft palate and prevents the return of the food which is being grasped by the constrictors.

Relations: Superficially, it is covered by the mucous membrane of the soft palate and the side of the tongue; deeply, it is in contact with the aponeurosis of the soft palate, the superior constrictor of the pharynx, and the hyoglossus; behind it lies the tonsil.

The extrinsic muscles of the tongue