The olfactory apparatus [organon olfactus] in man does not reach the high development which is found in many of the lower animals.

In them, not only is the sensory apparatus found distributed over a large area of the nasal mucous membrane, but the central connections of the olfactory nerves make up a considerable portion of the brain, including all those structures known under the name of rhinencephalon. In man, sensibility to smell is localised to a comparatively limited area in the upper part of the nasal cavity, known as the olfactory area.

The structure of the nose in all its parts has been fully dealt with in the section on the Respiratory System and hence it is not necessary to describe the whole nasal cavity.

The olfactory area of the nose includes the uppermost part of the nasal fossae on the lateral wall above the superior concha, and a slightly larger area of the septum.

The figure below shows the size of this area, and it will be noticed that the area on the lateral wall of the nose does not coincide with the area of the superior concha, but is rather smaller. It should be added that the olfactory nerves can be traced to a somewhat larger area of the mucous membrane, to the middle concha; it is, therefore, possible that the area indicated is too small.

The mucous membrane in the olfactory area has special characters, both naked eye and microscopic, which distinguish it from the rest of the nasal mucous

Diagram op the Distribution op the Nerves in the Nasal Cavity. (Poirier and Charpy.) The olfactory area is represented by dots. A, septum. B, lateral wall.

membrane. It is usually of a yellowish colour, and is soft and pulpy in consistence It is covered by a columnar ciliated epithelium and contains numerous glands (glands of Bowman) . 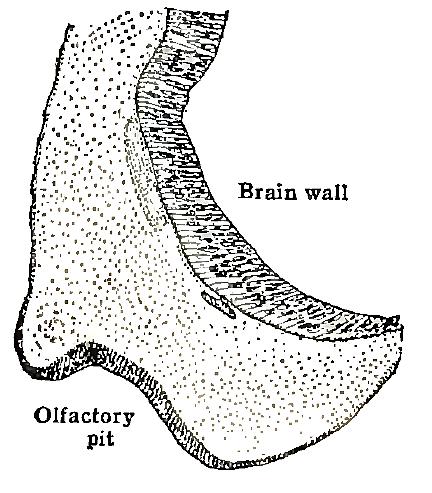 The connections of the olfactory bundle and tract with the brain are fully dealt with in the section on the Nervous System.

The organ of Jacobson is a small rudimentary structure in man. It is represented by a minute canal, 2 to 9 mm. long, placed on each side in the lower portion of the nasal septum, opening on the surface slightly above the orifice of the naso-palatine canal. Below it lies a small piece of cartilage, lying below the cartilage of the septum, and known as Jacobson's cartilage. The canal is lined by epithelium, but contains no olfactory cells. It is developed from a small portion of the olfactory plate which becomes separated from the area which gives rise to epithelium of the olfactory region.