Have you ever had the measles? Like many other diseases, it begins with a fever, runny nose, and sore throat. Soon after, a rash begins to cover the body. In about 30% of measles cases other complications develop, such as pneumonia, encephalitis (swelling of the brain), and even death. Though the first recorded account of the measles was in the 9th century, it was not until 1912 that healthcare providers in the United States began reporting cases. Between 1912 and 1922, there were over 6,000 deaths related to the measles. This trend continued until 1963, when the first measles vaccine became available. The measles was declared eliminated from the United States in 2000 primarily due to the fact that the vast majority of children were receiving two doses of the vaccine. On January 23, 2015, the Center for Disease Control issued a health advisory about an outbreak of measles in several states . The outbreak originated at a popular theme park in California in December 2014 when an infected tourist from another country visited the theme park. Many of the people who became infected were not vaccinated or had not received the second dose of the vaccination.

No one knows exactly when viruses emerged or from where they came, since viruses do not leave historical footprints such as fossils. Modern viruses are thought to be a mosaic of bits and pieces of nucleic acids picked up from various sources along their respective evolutionary paths. Viruses are acellular, parasitic entities that are not classified within any kingdom. Unlike most living organisms, viruses are not cells and cannot divide. Instead, they infect a host cell and use the host’s replication processes to produce identical progeny virus particles. Viruses infect organisms as diverse as bacteria, plants, and animals. They exist in a netherworld between a living organism and a nonliving entity. Living things grow, metabolize, and reproduce. Viruses replicate, but to do so, they are entirely dependent on their host cells. They do not metabolize or grow, but are assembled in their mature form. 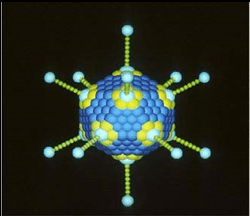 The first organisms that originated about 3.5 billion years ago were prokaryotes that possessed the structures and metabolic processes associated with cells (refer to the Cell Structure chapter). As discussed in the chapter on cell structure, prokaryotic cells are much smaller than eukaryotic cells and inhabit just about every square inch of our planet, from the most inhospitable environments to the surface of the skin. Viruses are much smaller than prokaryotes and much simpler in structure. They must reproduce inside a host cell. Their origin is still a mystery to us, but we do know that they can make us very sick.

The emergence of new viruses is related to the viral evolution, the ecological change of niche, the modification of the environment, the bioterrorism…

Some human cancers are linked with viruses.