Histology of the liver 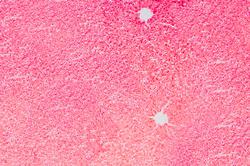 That portion of the liver which is exposed in the abdominal cavity is covered by a reflection of the peritoneum, closely attached to the organ, because its deeper side is continuous with the fibrous structures or interstitial tissue of the liver itself. This serous covering is so thin that the substance of the liver can be readily seen through it.
At the portal fissure, the serous coat having been reflected from it, the liver is covered with a loose areolar tissue in which the main trunks of all but one of the vessels connected with it are situated: namely, the portal vein, hepatic artery, gall-duct, and lymphatics.

These vessels enter the liver together at this place, and are closely associated with each other in all their ramifications, being supported throughout by areolar tissue, which is continuous with that at the portal fissure and with the interstitial tissue of the liver.

These vessels, with their supporting fibrous investment, called Glisson's capsule, ramify in the liver in such a way as to resemble a tree with a multitude of branches and twigs, each composed of divisions of all the vessels named.

The hepatic vein enters the liver at a different place, and also suffers a tree-like subdivision ; but its branches are surrounded by a very much smaller amount of fibrous tissue, which may be regarded as but a slightly reinforced portion of the interstitial tissue of the organ.

Sections of the liver will reveal portions of these two trees, cut in various directions with respect to their axes. It will be observed that the twigs and larger branches of the trees are nowhere in close relations to each other, showing that the hepatic vein, in all its ramifications, is separated from the other vessels by the parenchyma of the organ. If we select some part of a section which contains one of the smallest branches of the hepatic vein, and cut across its axis so that its lumen appears round, we shall notice that at about equal distances from it there are sections of two, three, or four twigs of the compound tree. In these the gall-duct can be identified by its distinct lining of columnar or cubical epithelium, and the hepatic artery distinguished from the portal vein by its relatively thick wall as compared with the size of its lumen.

These vessels are collectively known as the interlobular vessels.

Between and around them is the areolar fibrous tissue, which forms a part of Glisson's capsule, and which is abundantly supplied with lymphatic spaces and vessels in the fibrous tissue. The lymphatics appear as clear spaces with smooth walls, some of them with distinct endothelial linings, but almost devoid of any other wall.

The parenchyma may be subdivided into portions which surround the smallest branches of the hepatic vein, and are bounded by imaginary lines connecting the groups of interlobular vessels.

Between the interlobular capillaries are rows of epithelial cells, which constitute the functional part of the liver, its parenchyma.

They appear to touch the walls of the capillaries, but are, in reality, separated from them by a narrow lymph-space. In the human liver the epithelial cells of the parenchyma form a plexus lying in the meshes of the capillary network of the interlobular vessels.

It requires an effort of the imagination to conceive of a third plexus within the lobule, but such a plexus exists, being formed of the radicles of the gall-duct. These are minute channels situated between contiguous epithelial cells, each of which is grooved upon its surface to form half of the tiny canal. The cells themselves have fine channels running from the bile-capillaries into their cytoplasm and ending there in little rounded expansions. It is difficult to detect these bile-capillaries in ordinary sections of the liver, unless they have been previously injected through the main duct; but with a high power their cross-sections may sometimes be clearly seen, appearing as little round or oval spaces at the junction of two epithelial cells, midway between the nearest capillary bloodvessels.

Throughout their whole course they appear to be separated from the nearest bloodvessels by a distance approximately equal to half the diameter of one of the epithelial cells. It is this fact that makes it so difficult to frame a mental picture of their distribution in the lobule.

The nerves supplying the liver ramify in extremely delicate, non-medullated fibrils, which ramify throughout the substance of the liver and terminate in minute twigs among its epithelial cells.

The epithelial cells of the liver have a cubical shape, the grooved and other surfaces that come in contact with neighboring cells being flat, while the remaining surfaces may be somewhat rounded. The cytoplasm is granular, and, except after a considerable period of starvation, more or less abundantly infiltrated with irregular granules and masses of glycogen and globules of fat. The glycogen dissolves out of the cells during the ordinary processes of fixation and hardening preparatory to the preparation of sections, leaving spaces in the cytoplasm, which cause it to have a coarsely reticulated appearance in cases where the glycogen was abundant.

This reticulation would render it impossible to distinguish the minute intracellular bile-passages. Each cell has a round vesicular nucleus near its centre. In rare instances two nuclei may be found in a single cell. The functions of the liver are so varied and involve such complex chemical transformations that the liver-cell must be considered as a structure of marvelous activity. It stores carbohydrate food-stuffs, transforming sugars into glycogen, and converts this substance into dextrose as occasion requires. It also stores fats, reserving them for the needs of the organism. It elaborates the bile-salts and pigment, deriving material for the latter from the hemoglobin of the blood. In addition to these functions, many synthetical processes occur in the liver. The nitrogenous waste-products of metabolism in other parts of the body are here changed into forms suitable for excretion by the kidney. Most of the urea appearing in the urine is formed in the liver. Injurious substances absorbed from the intestine are, at least in many instances, combined in the liver with chemical radicals to form less toxic compounds which can be eliminated. It therefore exerts an important detoxi-eating influence highly beneficial to the other organs and cells of the body. In view of these numerous functions and the great versatility displayed by the liver-cells, it is not surprising to find that by special methods of preparation very diverse structural appearances are presented by these cells, and that these appearances vary with the condition of the liver at the time of its removal from the body. Some observers believe that the intercellular bile-radicles described by others are artefacts, and not permanent structures.

Some investigators have ascribed amoeboid movements of limited range to these cells, and have noted the presence of red blood- corpuscles within the cytoplasm, apparently incorporated by active movements of the cell-body. Injections have even been made to penetrate the nucleus. Diversities in apparent structure, of which these are merely a few examples, render it impossible to give a brief adequate description of the typical liver-cell or to connect definitely the observed structures with any particular function.

It will, perhaps, make the structure of the liver a little more comprehensible if it is stated that the liver of some of the lower animals is a tubular gland, the tubes of which are lined with a layer of epithelium. In the human liver this tubular structure is disguised by the facts that the tubules anastomose with each other, and that their lumina are very minute and bounded by only two cells when seen in cross-section. So inconspicuous are these lumina that a casual glance at a section of a liver would not reveal the fact that it was a glandular organ.

The interstitial tissue of the liver consists of a few sparsely distributed fibers continuous with those of Glisson's capsule.

The intricate structure of the liver prepares us for the fact that its function is an extremely complex one. It is a secreting gland, elaborating the bile and discharging it into the duodenum. But the bile has more than one purpose. It aids in the digestion and absorption of food, and it also contains excrementitious matters destined to leave the body through the alimentary tract. Even the secretory function of the liver, therefore, serves a double purpose : the supply of substances useful to the organism and the elimination of products that would be detrimental if retained.

But the function of the liver is not confined to the elaboration of the bile. It also acts as a reservoir for the storage of nourishment, which can be drawn upon as needed by the organism. This is the meaning of the glycogen and fat which have infiltrated the cells.

The food-materials that are absorbed from the digestive tract pass into the system through two channels : the lymphatic and the portal circulations. The latter carries them to the liver, where some of the fat, probably after desaponification, is taken up by the epithelial cells, which also appropriate a portion of the sugar in the portal blood, transforming it into glycogen and holding it in that form until a relative deficiency of glucose in the blood reveals its need by the system.

The blood comes into such close relations with the epithelial cells of the liver that an interchange of soluble substances between them appears to be about as easy a matter as the interchange of gases between the blood and the air in the lungs ; and, as in the latter case, this interchange is mutual : some matter passing from the blood to the liver-cells and some from the cells to the blood. In the lung there is a gaseous regeneration of the blood ; in the liver, a renovation as to certain of its soluble constituents.

The bile is secreted continuously by the liver, for it is an excrement ; but it is discharged intermittently into the alimentary tract, as required by the digestive processes. In theinterval it is stored in the gall-bladder.

The gall-bladder is lined with columnar epithelium, capable of secreting mucus. Beneath this is a layer of fibrous tissue, which becomes areolar and supports the chief blood vessels and lymphatics.

A few glands opening into the gall-bladder are occasionally present in this tissue. Beneath this is the wall of the organ, composed of interlacing bands of fibrous and smooth muscular tissues. The surface is invested by a portion of the peritoneum. The excretory bile-duct has a similar structure.