The fibers of each trochlear or fourth nerve (or patheticus) spring from the cells of a nucleus which lies in the grey substance of the floor of the cerebral aqueduct in hne with the oculo-motor nucleus, but in the region of the inferior quadri-geminale bodies.

As the fibers pass from their origins they rim ventrally and laterally in the substance of the tegmentum for a short distance, then they curve medianward and dorsalward, and, in passing through the anterior end of the superior medullary velum they decussate totally with the fibers of the trochlear nerve of the opposite side. After the decussation the fibers emerge from the surface of the superior medullary velum, at the side of the frenulum veli, usually in two small bundles, which pierce the pia mater and join together to form the slender trunk of the nerve. This trunk curves forward and ventralward to the base of the brain around the sides of the superior peduncle of the cerebellum and cerebral peduncle of the side opposite to that in which the nerve originates, running parallel with and between the superior cerebellar and posterior cerebral arteries. 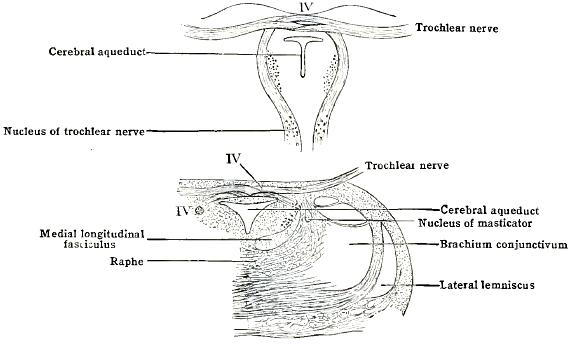 Diagrams op Sections through the Origin op the Trochlear Nerve. (Stilling.) (The upper figure is an oblique section, the lower is a coronal section.)

As it reaches the base of the brain behind the optic tract the nerve enters the cisterna basalis, in which it runs forward, immediately beneath or piercing the free border of the tentorium cerebelli, to the superior border of the petrous portion of the temporal bone, where it pierces the arachnoid and the dura mater and enters the posterior end of the lateral wall of the cavernous sinus. In the wall of the cavernous sinus it receives communications from the cavernous plexus of the sympathetic and bj' a small filament from the ophthalmic division of the trigeminus. It gradually ascends, as it passes forward in the lateral wall of the sinus, and, beyond the middle of the sinus, it crosses the lateral side of the trunk of the oculo-motor nerve and gains a higher position. At the anterior end of the sinus the nerve enters the orbit above the lateral rectus and immediately turns medialward between the periosteum of the roof of the orbit and the levator palpebrae superioris. At the medial border of the roof it turns forward to its termination, and enters the orbital or superior surface of the superior oblique muscle to which its fibers are distributed.

The central connections of the nucleus of the trochlear nerve are similar to those of the oculo-motor save that its cells probably do not send fibers which connect with the facial nerve.

The trochlear is peculiar in that: