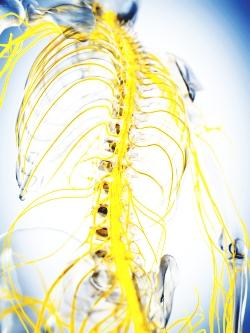 Summary of the spinal cord

The spinal cord contains two general classes of axons arranged into three general systems. It contains axons which - (a) enter it from cell-bodies situated outside its boundaries, i. e., in the spinal ganglia and in the encephalon, and (b) axons which arise from cell-bodies situated within its own grey substance, some of which axons pass outside its boundaries both to the periphery and into the encephalon; some of which remain wholly within it. Its axons comprise

(a) The cephalic branches of certain spinal ganglion neurons ascend beyond the bounds of the spinal cord to terminate within the medulla. Those ascending from the spinal ganglia of lower thoracic and lumbo-sacral segments accumulate mesiaUy to form the fasciculus gracilis which terminates in the nucleus of this fasciculus; those arising from the upper thoracic and cervical segments accumulate more laterally in the posterior funiculus to form the fasciculus cuneatus which terminates in the nucleus of the fasciculus cuneatus.

(b) The impulses transferred to the neurons of these nuclei are borne across the mid-line and finally reach the sensory-motor area of the cerebral cortex, and cell-bodies here give rise to axons which descend, some decussating in the medulla to form the lateral cerebrospinal fasciculus, others form the uncrossed ventral cerebrospinal fasciculus which crosses the mid-line as it descends the cord. Both of these fasciculi transfer their impulses either directly to efferent ventral horn neurons, or to association neurons and these to the efferent neurons,

(c) The cephalic and caudal branches of spinal ganglion neurons terminate about cell-bodies in the grey substance of the cord whose axons cross the mid-line and ascend laterally to terminate either in the quadrigeminate bodies (spino-mesencephalic tract), or in the thalamus (spino-thalamic tract),

(e) The rubrospinal tract arises from cell-bodies in the red nucleus (in the mesencephalon), crosses the mid-line and descends in the lateral funiculus to transfer (probably cerebellar) impulses to the efferent neurons of the spinal cord.

(a) The cephalic and caudal branches of spinal ganglion neurons give telodendria about the cell-bodies forming the dorsal nucleus of the cord (Clarke's column) and about cell-bodies situated in grey substances ventral to the dorsal nucleus ("Stilling's nucleus") and in the lateral horn. Axons arising from the cells of the dorsal nucleus pass laterally to form the dorsal spino-cerebellar fasciculus which ascends into the cerebellum by way of its inferior peduncle of the same side and terminates about cell-bodies of its cortex. Axons arising from Stilling's nucleus and the lateral horn cells, of both the same and opposite sides of the cord, accumulate to form the superficial ventro-lateral spino-cerebellar fasciculus, which ascends to enter the cerebellum by way of its superior peduncle and terminate about the cells of the cerebellar cortex,

(b) A few axons arising in the roof nucleus of the cerebellum probably descent in the animor marginal fasciculus in company with the ventral vestibulospinal tract to terminate upon the efferent neurons of the cord,

(c) The inferior olivary nucleus, in the medulla, is a cerebellar relay and its cell-bodies are associated with the neurons of the upper portion of the same side of the spinal cord. Whether the axons arise in the olivary nucleus or in the grey substance of the cord is uncertain, but the more usual supposition favors the cord and thus the name, spino-olivary fasciculus is given them,

(d) Among its other functions, the cerebellum is concerned with equilibration. The vestibular nerve is the afferent nerve of equilibration and a large mass of the axons arising from its nuclei of termination terminate in the cerebellum, in the roof nuclei especially. Axons arising from cell-bodies in Deiters' nucleus (its lateral nucleus of termination) and in the nucleus of its descending root descend the cord in the lateral funiculus to form the (lateral) vestibulospinal tract, and also in the anterior marginal fasciculus to form ventral vestibulospinal tract. Impulses borne by these axons reach the efferent or motor root neurons. The rubro-spinal fasciculus, mentioned above also may be possibly considered as belonging to the cerebellar system.