The right atrium of the heart

The right atrium (atrium dextrum) is in the right part of the base of the heart. It is irregularly cuboidai in shape with the apex forming an anteriorly directed ear-shaped portion called the auricle of the right atrium (auricuh dextra).

The following walls are distinguished in the right atriura: a lateral wall which faces to the right; a medial wall directed to the left which is common to the right and left atria and is the atrial septum (septum interatriale); a superior, posterior, and anterior walls. The inferior wall is absent, here is the right atrioventricular orifice by means of which the right atrium communicates with the right ventricle.

The auricle of the right atrium (auricula dextra) is the projecting part of the atrium and is shaped like a flattened cone whose apex is directed to the left towards the pulmonary trunk. The inner curi'ed surface of the auricle faces the root of the aorta. The superior and inferior margins of the auricle bear small protuberances.

The superior and inferior venae cavae, the coronary sinus, and small veins of the heart proper enter the right atrium,

The venae cavae meet at an obtuse angle; the distance between their openings measures up to 1.5-2.0 cm. A small intervenous tubercle (tuberculum intervenosiim) is found on the inner surface of the atrium between the openings for the venae cavae.

3. The coronary sinus (sinus coronarius) is the common collector for the veins of the heart proper. It opens at the junction of the medial and posterior walls of the right atrium under the valve of the inferior vena cava.

At the right margin of the opening for the coronary sinus is a small valve of the coronary sinus (valvula sinus coronarii). The free border of the valve is directed at the atrial septum. The valve bears some openings transmitting small veins of the heart. 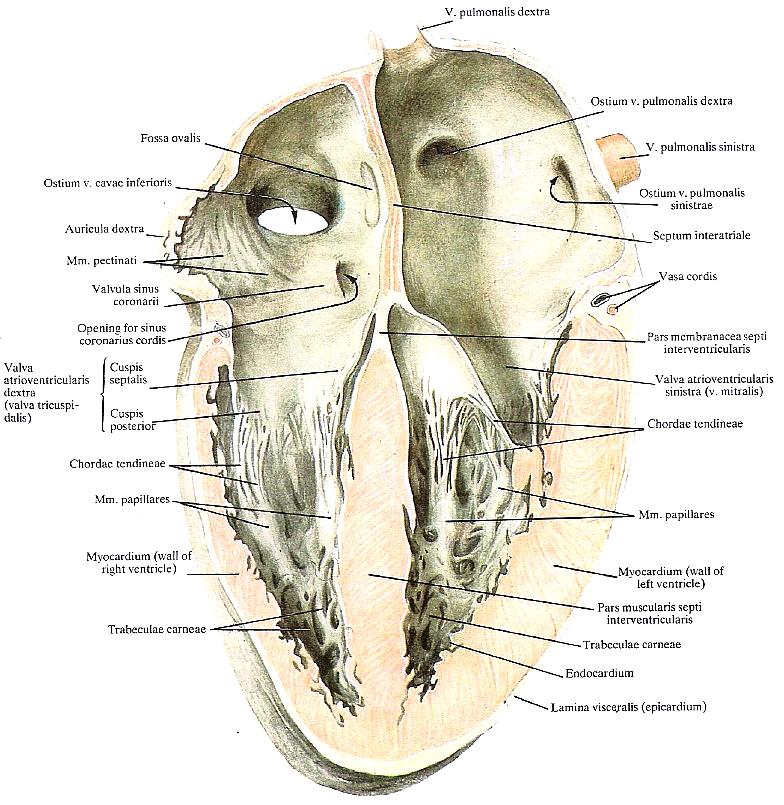 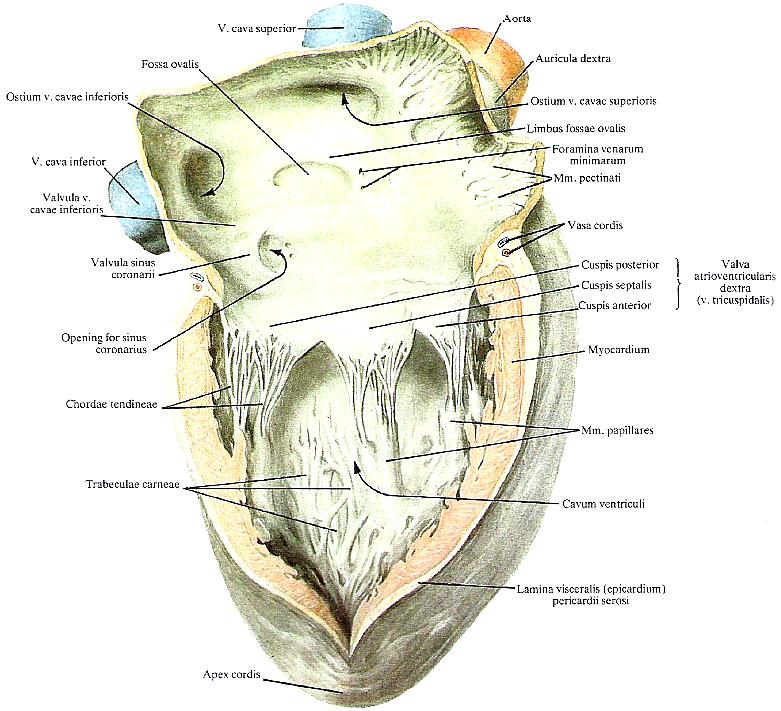 (The right atrium and right ventricle are opened.)

4. The venae cordis minimae are the small veins of the heart proper which drain blood from its walls. They open through the foramina venarum minimarum mainly on the atrial septum and on the lower parts of the right (lateral) and anterior walls of the atrium.

The outlines of the inner surface of the right atrium differ. The medial (left) and the posterior walls are smooth. The lateral (right) and anterior surfaces are uneven because the musculi pectinati form elevations in the cavity of the atrium in which superior and inferior muscular bundles are distinguished. The superior bundle stretches from the openings for the venae cavae to the superior wall of the atrium, the inferior bundle runs on the inferior margin of the right wall superiorly to the atrioventricular groove.

Small muscular elevations stretch upwards and downwards between these bundles. The musculi pectinati originate in the region of the crista terminalis; the above mentioned sulcus tcrminalis on the external surface of the atrium corresponds to this crista.

The inner surface of the auricle of the right atrium is uneven and covered by the musculi pectinati crossing one another in different directions.

The relatively smooth medial (left) wail of the right atrium, i.e. the septum between the atria, has a hollow oval depression called the fossa ovalis. It forms from closure of the foramen ovale through which the right and left atria communicate in the embryonal period. The Boor of the fossa ovalis is very thin and in many adults has a slitdike opening the size of a pin point, which is a remnant of the foramen ovale of the foetal heart and is easily seen in the left atrium.

The annulus ovalis (limbus fossae ovalis) is formed by a small muscular elevation binding it anteriorly and inferiorly; the medial end of the valve of the inferior vena cava is attached to the annulus in front.

Anatomy of the heart and pericardium