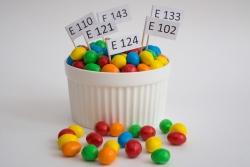 Red meat, yellow bananas and orange papayas…They are all better and healthier when they come naturally. But when we ask science to lend a hand in getting us our food as “colorful” as we would like it to be, we get ourselves in trouble.

Artificial food colorings have been classified as one of the most dangerous food preservatives, and yet they are found in the things we love the most. Popsicles, drinks, puddings, boxed mac’n’cheese, sauces, chips, baking mixes, etc.; be it for the FD&C Red No. 40,  FD&C Yellow No. 5 or FD&C Blue No. 1; three of the most commonly used FDA-approved food colorings. The other thing is, those colorings are not just found in food but in our shampoos, toothpastes, vitamins and beauty products, just to name a few. So we definitely come in contact with artificial colorings in more than one way. Even though synthetic food colorings are derived from naturally existing products, they are still artificially made, as the majority of their ingredients are synthetic.

Colored Foods Are To “dye” For

To be frank, colored foods and nutrients are prettier than healthy. Over the past decades, different categories of food coloring have been progressively removed from the list of “safe” colorings, because of their known side-effects (Orange #1 which had made some children ill following Halloween in 1970, Red #1, etc.) Today, several food colorings are under high scrutiny, and even for those that have been FDA approved, some health-conscious individuals are still reticent to use them or let their kids consume them.

A study research at the University of Southampton in 2007 has shown that six specific dyes (referred to as The Southampton Six) have been associated with hyperactivity in children. This research was performed on 300 three-year old kids, and was published in the journal Archives of Diseases in Childhood.  More interestingly, other major studies have proven that restricting the intake of coloring in foods could greatly assist children with ADHD, Attention Deficit Hyperactivity Disorder. Going one step further, it was experimentally proven that following the removal of colored foods from school food programs, there was an obvious increase in academic performance and decrease in disciplinary problems in concerned children.

In addition to worsening the symptoms of ADHD in children, food colorings can also cause several other health effects. For example, a report from the CSPI (Center for Science in the Public Interest) in 2010 stated that the nine dyes approved by the FDA couldn’t be considered safe, as they could trigger allergic reactions, anxiety, migraines. Consumable dyes such as tartrazine (FD&C Yellow 5; commonly present in ice-creams, popsicles, soft drinks, and powdered drink mixes like Kool-Aid corn chips, cereals, etc.)have the potential to cause hives, a well-known allergic reaction.

Another issue with colored foods is the fact that people often tend to believe that the richer the color of a food, the healthier it is. For instance, we could be tempted to think that a very reddish piece of meat sold in a supermarket is fresher than a locally produced piece of meat. Similarly, a colorful bowl of cornflakes might mimic the richness of vegetables. Those are some of the tricks that manufacturers use to get customers and buyers to purchase their products. So when buying our products, we need to carefully establish what our priorities are: is it the appearance of the food or its real content that we are after?

At the end of the day, the question remains, as Professor Warner (University of Southampton) had so simply asked: “{…} why do we have to have colored food? Why can't people have pale salmon rather than pink salmon?” Maybe the real problem stems from learning to appreciate what we have, and for what it is. But when all is said and done, the healthier we strive to keep ourselves, the better off we are. We could make an active choice to switch to natural and organically produced foods, reduce our intake of colored foods or, if not eating colored foods really make us turn red, we could opt for natural food dyes that are commercially produced; like turmeric, Annatto, Saffron and Caramel.