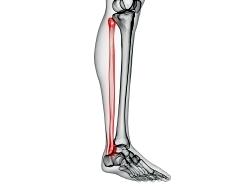 The fibula (French: fibula ; péroné)is situated on the lateral side of the leg and, in proportion to its length is the most slender of all the long bones. It is placed nearly parallel to the tibia with which it is connected above and below. In man it is a rudimentary bone and bears none of the weight of the trunk, but is retained on account of the muscles to which it gives origin and its participation in the formation of the ankle-joint. Like other long bones, it is divisible into a shaft and two extremities.

The head [capitulum fibulae], or upper extremity, is a rounded prominence. Its upper surface presents laterally a rough eminence for the attachment of the biceps tendon and the fibular (long external) collateral ligament of the knee-joint, medially it presents a round or oval facet [fades articularis capituli], directed upward, forward, and medially, for articulation with the lateral condyle (tuberosity) of the tibia. The margin of the facet gives attachment to the articular capsule of the superior tibio-fibular articulation. Posteriorly, the head rises into a pointed apex (styloid process), which affords attachment to the short lateral ligament of the knee-joint, and on the lateral side, to part of the biceps tendon.

The posterior aspect of the head gives attachment to the Soleus, the lateral aspect, extending also in front of the eminence for the biceps, to the peroneus longus; from the anterior aspect fibres of the extensor digiiorum longus arise, whilst the medial side lies adjacent to tlie tibia.

The shaft [corpus fibulse], in its upper three-fourths, is quadrangular, possessing four borders and four surfaces, whereas its lower fourth is flattened from side to side, so as to be somewhat triangular. The borders and surfaces vary exceedingly so that their description is difficult. The anterior crest (or antero-lateral border) commences in front of the head and terminates below by dividing to enclose a subcutaneous surface, triangular in shape, immediately above the lateral malleolus. It gives attachment to a septum separating the extensor muscles in front from the peronei muscles on the lateral aspect. The interosseous crest (or antero-medial border), so named from giving attachment to the interosseous membrane, also commences in front of the head, close to the anterior crest, and terminates below by dividing to enclose a rough triangular area immediately above the facet for the talus {astragalus) ; this area gives attachment to the inferior interosseous ligament, and may present at its lower end a narrow facet for articulation with the tibia. The medial crest (or postero-medial border), sometimes described as the oblique line of the fibula, commences at the medial side of the head and terminates below by joining the interosseous crest, in the lower fourth of the shaft. It gives attachment to an aponeurosis separating the tibialis posterior from the soleus and flexor hallucis longus. The lateral crest (or postero-lateral border) runs from the back of the head to the medial border of the peroneal groove on the back of the lower extremity; it gives attachment to the fascia separating the peronei from the flexor muscles.

The upper end of the left fibula to show muscular and ligamentous attachments (G. J. Jenkins.)

The anterior or extensor surface is the interval between the interosseous and anterior crests. In the upper third it is extremely narrow, but broadens out below, where it is slightly grooved longitudinally. It affords origin to three muscles : laterally, in the upper two-thirds, to the extensor digitorum longus, and, in the lower third, to the peroneals tertius; medially, in the middle third, also to the extensor hallucis longus. The medial surface, situated between the interosseous and medial crests, is narrow above and below, and broadest in the middle. It is grooved and sometimes crossed obliquely by a prominent ridge, the secondary oblique line of the fibula; the surface gives origin to the tibialis posterior, and the ridge to a tendinous septum in the substance of the muscle. The posterior surface is the interval between the medial and lateral crests, and is somewhat twisted so as to look backward above and medially below. It serves, in its upper third, for the origin of the soleus, and in its lower two-thirds for the flexor hallucis longus. Near the middle of the surface is the medullary foramen, directed downward toward the ankle. The lateral surface, situated between the anterior and lateral crests, is also somewhat twisted, looking laterally above and backward below, where it is continuous with the groove on the back of the lateral malleolus. The surface is often deeply grooved and is occupied by the peroneus longus in the upper two-thirds and by the peroneus brevis in the lower two-thirds. 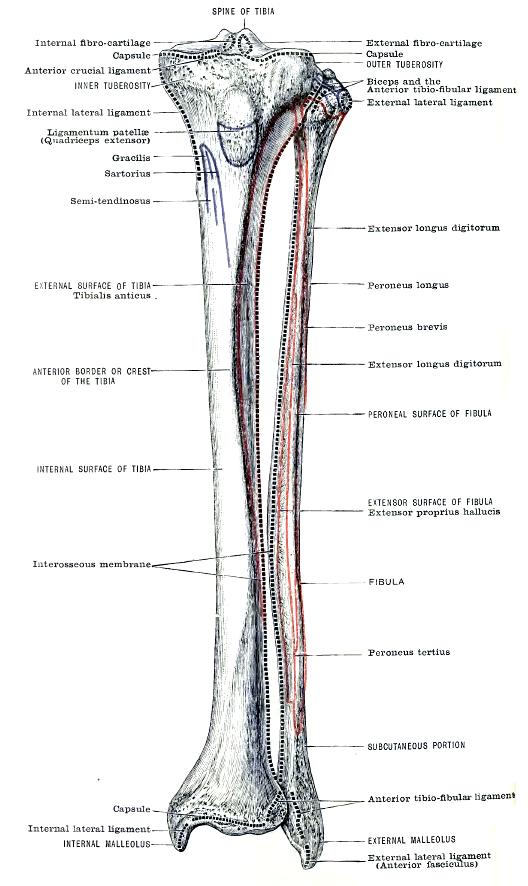 The lateral malleolus or lower extremity

The lateral malleolus or lower extremity is pyramidal in form, somewhat flattened from side to side, and joined by its base to the shaft. It is longer, more prominent, and descends lower than the medial malleolus. Its lateral surface is convex, subcutaneous, and continuous with the triangular subcutaneous surface on the shaft, immediately above. The medial surface is divided into an anterior and upper area [facies articularis malleoli], triangular in outline and convex from above downward for articulation with the lateral side of the talus (astragalus), and a lower and posterior excavated area, the digital fossa, in which are attached the transverse iriferior tibio-fibular ligament and the posterior talo-fibular (posterior fasciculus of the external lateral) ligament of the ankle. The anterior border is rough and gives attachment to the anterior talo-fibular (anterior fasciculus of the external lateral) ligament of the ankle, and the anterior inferior tibio-fibular ligament. The posterior border is grooved for the peronei tendons, and near its upper part gives attachment to the posterior inferior tibio-fibular ligament. The apex or summit of the process affords attachment to the calcaneo-fibular (middle fasciculus of the external lateral) ligament of the ankle. 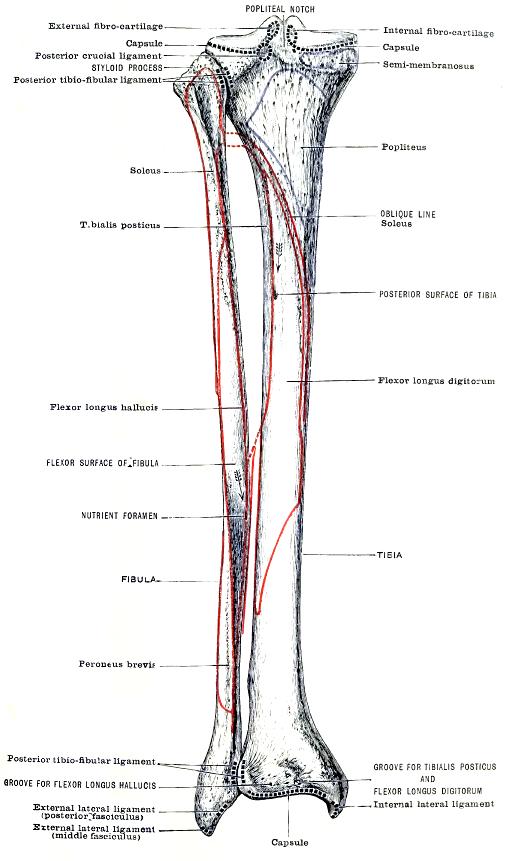 Blood-supply of the fibula

The shaft of the fibula receives its nutrient artery from the peroneal branch of the posterior tibial. The head is nourished by branches from the inferior lateral articular branch of the popliteal artery, and the lateral malleolus is supplied mainly by the peroneal, and its perforating and malleolar branches.

It is interesting, in connection with the times of appearance of the two epiphyses of the fibula, to note that the ossification of the lower epiphysis is contrary to the general rule - viz., that the epiphysis toward which the nutrient artery is directed is the last to undergo ossification. This is perhaps explained by the rudimentary nature of the upper extremity. In birds the head of the bone is large and enters into the formation of the knee-joint; and in human embryos, during the second month, the fibula is quite close up to the femur.