Its external surface is smooth, and presents on each side a slight elevation, 1 named frontal eminence, which corresponds with the most prominent part of the forehead: beneath this is an arched depression, bounded below by a prominent curved line, 3 called the superciliary ridge, or arch, which is more or less prominent in different individuals. Immediately beneath this is the margin of the orbit (orbital arch), 3 which is better defined towards its outer part, where it curves down to the malar bone, and forms the external angular process, 4 than at its inner portion, 5 where it gradually subsides towards the root of the nose. Towards the inner third of the orbital arch is a small foramen, 8 (supra-orbital.) or sometimes a notch, crossed by a ligament, which transmits the supra-orbital nerve and artery.

Between the superciliary ridges is the nasal eminence, 7 or glabella, which is prominent in proportion to the size of the frontal sinuses: it is bounded inferiorly by a rough surface which articulates with the right nasal bones and the ascending processes of the superior maxilla.

From this surface projects downwards in the median line a flat thin process 9 called the nasal spine ; it articulates in front with the nasal bones, and behind with the perpendicular lamella of the ethmoid. The internal surface of this part of the bone is concave, and presents along the median line a groove (sulcus frontalis), corresponding with the longitudinal sinus. The margins of the groove gradually approach towards the fore part of the bone, and in some cases unite so as to form a ridge (crista frontalis) ; but in others the groove, narrowed almost to a line, continues apparent down to the foramen caecum. In either case it gives attachment to the falx; this ridge terminates in a minute foramen, 2 called foramen ccecum, from its having been supposed to be merely a cul-de-sac, but it is in reality pervious, and lodges a small spur-like process of the dura mater, and transmits a vein which enters the sinus from the nasal fossae.

The orbital plates 5 or processes are smooth and concave at their inferior surface; the superior or cerebral is convex, and marked more or less in different instances by elevations and depressions corresponding with the sulci and convolutions of the anterior lobes of the brain which rest upon them. They are separated by a deep excavation (incisura ethmoidalis), which receives within it the cribriform plate of the ethmoid bone, and round its margins are several cells which complete the cavities lodged within the lateral parts of the last-named bone. In this margin may also be observed two foramina, 7 (anterior and posterior orbital,) [or ethmoidal,'] which are common to the frontal and ethmoid bones, as their contiguous margins contribute to their formation. The anterior one transmits the nasal twig of the ophthalmic nerve, and the anterior ethmoidal artery; the other the posterior ethmoidal artery and vein. Each orbital plate is bounded externally by a thick well-marked prominence, 12 called the external angular process; and internally by a depressed and smooth one (internal angular process). Near the inner one is a slight depression, 10 to which is attached the cartilaginous pulley of the trochlearis muscle, and hence sometimes named fovea trochlearis; near the outer process and within the orbit, is a depression 9 for the lodgment of the lachrymal gland; the external side of this process is slightly hollowed, and forms part of the temporal fossa.

The thickness of the frontal bone varies considerably in different parts of it. The orbital plates are thin and translucent; the nasal and external angular processes are thick and prominent. The upper or broad part is thinner at the frontal eminences than elsewhere, if these are well marked so as to indicate a full development of the corresponding cerebral parts. In childhood the two tables are separated only by the diploe, as in other bones; but, in adult age, an interval exists" between them at the middle line over the nasal process, and extending outwards for some way under the superciliary ridges. This interval, the extent of which varies in different individuals, is divided by a ridge of bone into two parts or cavities, 11 called the frontal sinuses; they are lined by mucous membrane, and communicate with the anterior ethmoidal cells. [In some rare instances these sinuses are never developed.]

The frontal articulates with twelve bones; superiorly with the two parietal ; laterally and behind with the sphenoid ; inferiorly with the ethmoid, with the nasal bones, with the ossa unguis, with the ascending processes of the superior maxillary bones, and with the malar bones. The mode of articulation differs in different parts of its circumference. Thus, the superior border is found to overlap and rest on the parietal bones, whilst towards the lateral and inferior parts the exterior table of the bone is bevelled off, and is covered in by the parietal. The posterior border of the orbital plates, straight and squamous, is in a manner inserted between the margins of the two alas of the sphenoid bone, with each of which it articulates.

It gives attachment to the corrugator supercilii — to a small part of the temporal and of the orbicularis palpebrarum.

This bone begins to ossify before the vertebrae, from two osseous points, which appear at the orbital arches.The lateral pieces formed by the spreading of the ossification, are quite distinct at birth. They afterwards become united along the middle by a straight suture, which runs from the vertex, where it is continuous with the sagittal suture, down to the nose. The suture is obliterated within a few years after birth, but the period varies in different cases, and in some instances it is found to remain during life.


Posterior view of the frontal bone 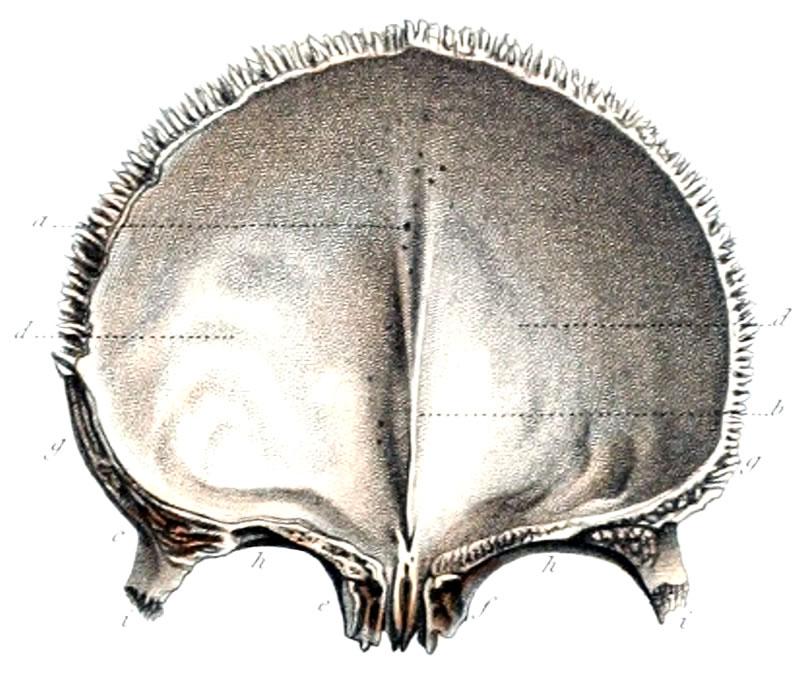 Inferior view of the frontal bone 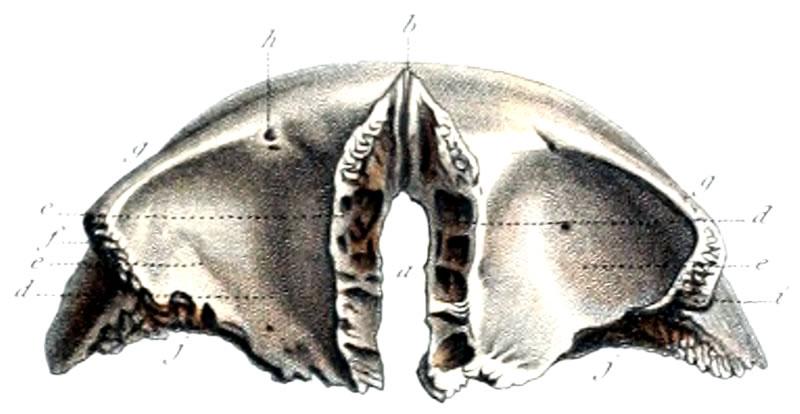