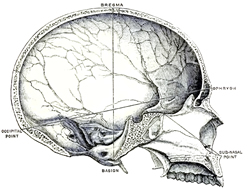 This enables the student to examine the various points with facihty and displays the great proportion the brain cavity bears to the rest of the skull. The sagittal section should be made slightly to one side of the median line in order to preserve the nasal septum. The black line (fig. 94) drawn from the basion (anterior margin of the foramen magnum) to the gonion (the anterior extremity of the sphenoid) represents the basi-cranial axis; whilst the line drawn from the gonion to the subnasal point lies in the basi-facial axis. These two axes form an angle termed the cranio-facial, which is useful in making comparative measurements of crania. A line prolonged vertically upwards from the basion will strike the bregma. This is the basi-bregmatic axis and gives the greatest height of the cranial cavity. A line drawn from the ophryon to the occipital point indicates the greatest length of the cranium.

Near its middle, the cranial cavity is encroached upon by the petrosal; the walls are channelled vertically by narrow grooves for the middle and small meningeal arteries and towards the base broader furrows are found for the venous sinuses.

The coronal section is most instructive when made in the basi-bregmatic axis. The section will pass through the petrosal in such a way as to traverse the two external auditory passages and expose the tympanum and vestibule and will also partially traverse the internal auditory meatuses. Such a section wdll divide the ' parietal bones slightly posterior to the parietal eminences and a line drawn transversely across the section at the mid-point will give the greatest transverse measurement of the cranial cavity. A skull divided in this way facilitates the examination of the parts about the posterior nares.

The horizontal section of the skull should be made through a line extending j from the ophryon to the occipital point, passing laterally a few millimetres above I the pterion on each side. It is of great advantage to study the various parts on the floor of the cranial cavity in a second skull having the dura mater and its various processes in situ. 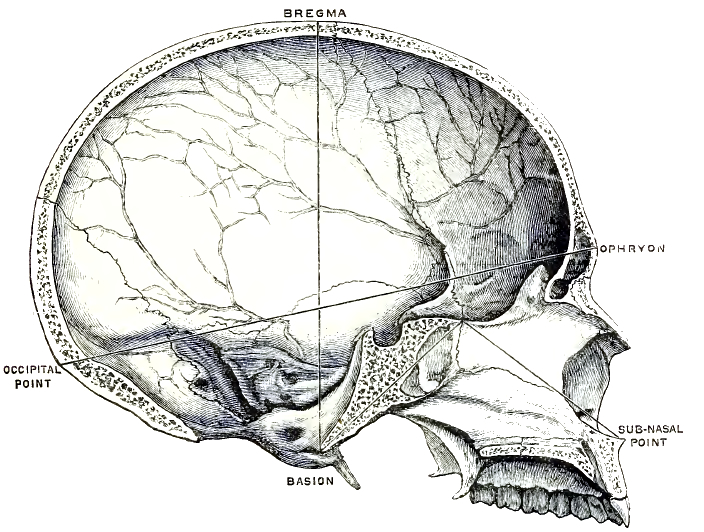 The Skull in Sagittal Section.

The anterior fossa: The floor of this fossa is on a higher level than the rest of the cranial floor. It is formed by the horizontal plate of the frontal bone, the cribriform plate of the ethmoid and the lesser wings of the sphenoid, which meet each other and exclude the pre-sphenoid from the anterior fossa. The free margins of the lesser wings and the optic groove mark the limits of this fossa posteriorly. The central portion of the fossa is depressed on each side of the crista galli, the depressions forming a part of the roofs of the nasal sinuses; laterally, the floor of this fossa is convex where it corresponds to the roof of the orbits and is marked by irregular furrows. It supports the frontal lobes of the cerebrum. The sutures traversing the floor of the fossa are the fronto-ethmoidal, forming three sides of a rectangle, that portion of the transverse facial suture which traverses the roof of the orbit and the ethmoido-sphenoidal suture, the centre of which corresponds to the gonion. 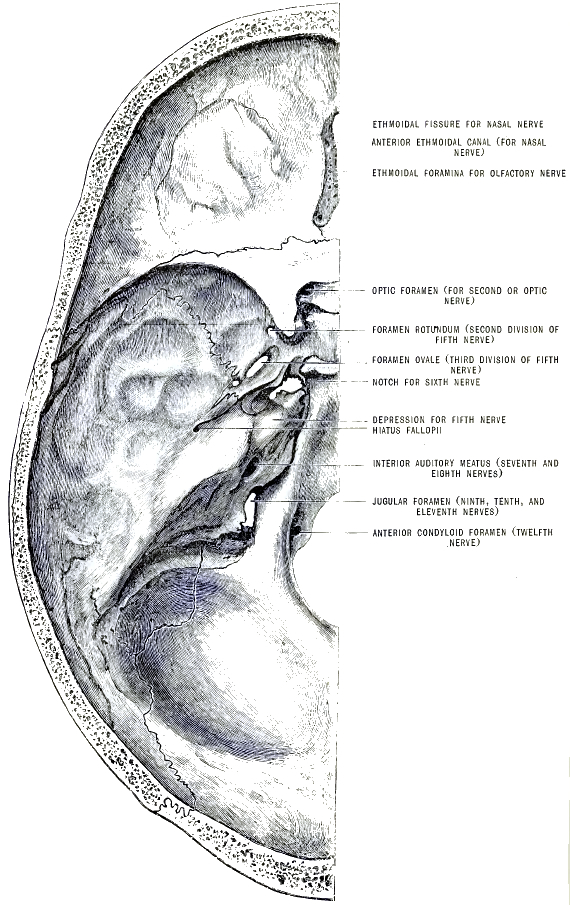 The skull in horizontal section 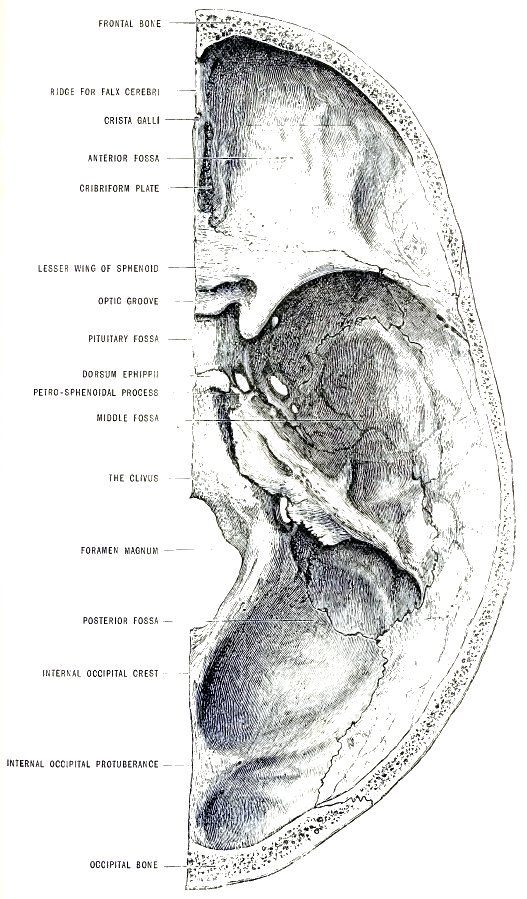 The skull in horizontal section

The points of interest in the fossa are:

On the posterior wall of this fossa the objects of interest are: -

It has the following objects of interest:

The anterior boundaries of the fossa present:

The cranium of an average European has a capacity of 1450 cc. The circumference, taken in a plane passing through the ophryon anteriorly, the occipital point posteriorly and the pterion laterally, is 52 cm. The length from the ophryon to the occipital point is 17 cm.; the width between the parietals at the level of the zygomata is 12,5 cm.; and the height from the basion to the bregma is nearly the same. The cranio-facial angle is about 96°.