The mandible or lower jaw-bone

The mandible [mandibula] or lower jaw-bone is the largest and strongest bone of the face. It supports the mandibular teeth, and by means of a pair of condyles, moves on the skull at the mandibular fossae of the temporal bones. It consists of a horizontal portion — the body —  strongly curved, so as to somewhat resemble in shape a horseshoe, from the ends of which two branches or rami ascend almost at right angles.

The body is marked in the middle line in front by a faint groove which indicates the symphysis or place of union of the two originally separate halves of the bone. This ends below in the elevation of the chin known as the mental protuberance, the lowest part of which is slightly depressed in the center and raised on each side to form the mental tubercle. Each half of the mandible presents two surfaces and two borders. On the lateral surface, at the side of the symphysis, and below the incisor teeth, is a shallow depression, the incisor fossa, from which the mentalis and the incisivus labii inferioris muscle arise; and more laterally, opposite the second bicuspid tooth, and midway between the upper and lower margins, is the mental foramen, which transmits the mental nerve and vessels. Below the foramen is the oblique line, extending backward and upward from the mental tubercle to the anterior border of the rairius; it divides the body into an upper or alveolar part and a lower or basilar part and affords attachment to the quadratus labii inferioris and the triangularis oris.

The medial surface presents at the back of the symphysis four small projections, called the mental spine (genial tubercles). These are usually arranged in two pairs, one above the other; the upper comprising a pair of prominent spines, gives origin to the genio-glossi, and the lower, represented in some bones by a median ridge or only a slight roughness, gives origin to the genio-hyoid muscles. At the side of the symphysis near the inferior margin is an oval depression, the digastric fossa, for the insertion of the digastric muscle. Commencing below the mental spine and extending upward and backward to the ramus, is the mylo-hyoid line, which becomes more prominent as it approaches, the alveolar border; it gives attachment along its whole length to the mylo-hyoid muscle, at its posterior fifth to the superior constrictor of the pharynx, and at the posterior extremity to the pterygo-mandibular raphe. Above this line at the side of the symphysis is a smooth depression [fovea sublingualis] for the sublingual gland, and below it, farther back, is another for the submaxillary gland.

The alveolar part or superior border is hollowed out into eight sockets or alveoli. These are conical in shape and form an exact counterpart of the roots- of the teeth which they contain. From the lateral aspect of the alveolar process, as far forward as the first molar tooth, the buccinator muscle takes origin.

The base or inferior border is thick and rounded. In the anterior part of its extent, it gives attachment to the platysma, and near its junction with the ramus is a groove for the external maxillary artery which here turns upward into the face.

The ramus is thinner than the body and quadrilateral in shape. The lateral surface is flat, gives insertion to the masseter, and at the lower part is marked by several oblique ridges for the attachment of tendinous bundles in the substance of the muscle. The medial surface presents near the middle the mandibular (inferior dental) foramen, leading into the mandibular (inferior dental) canal which traverses the bone and terminates at the mental foramen on the lateral surface of the body. From the canal, which in its posterior two-thirds is nearer to the medial, and in its anterior third nearer to the lateral, surface of the mandible, 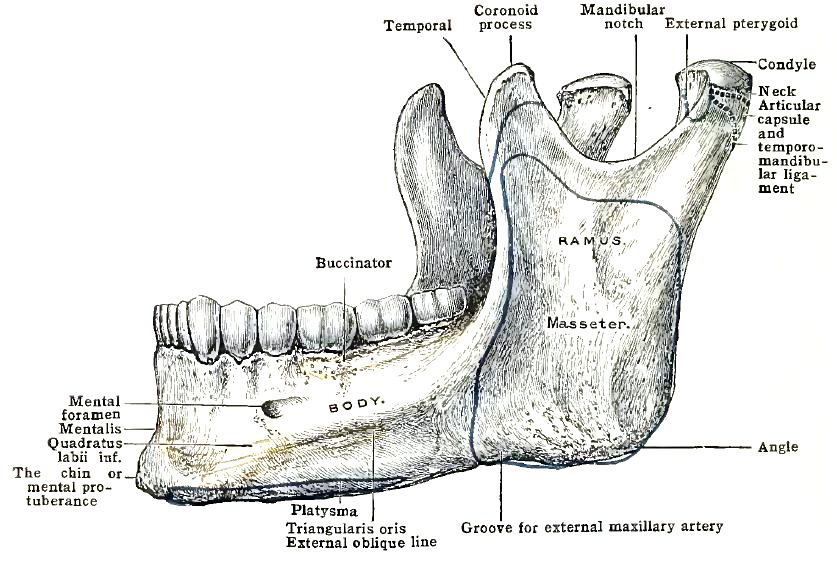 a series of small channels pass upward to the sockets of the posterior teeth and transmit branches of the inferior alveolar (dental) vessels and nerve; in front of the mental foramen, a continuation of the canal extends forward and conveys the vessels and nerves to the canine and incisor teeth. The mandibular foramen is bounded medially by a sharp margin forming the lingula (mandibular spine), which gives attachment to the spheno-mandibular ligament.

The posterior margin of the lingula is notched. This notch forms the commencement of a groove, the mylo-hyoid groove [sulcus mylohyoideus], which runs obliquely downward and forward and lodges the mylo-hyoid nerve and artery, and, in the embryo, Meckel's cartilage. Behind the spine is a rough area for the insertion of the internal pterygoid muscle.

The posterior border of the ramus is thick and rounded, and in meeting the inferior border of the ramus forms the angle of the jaw, which is rough, obtuse, usually everted, and about 122° in the adult; the angle gives attachment to the stylo-mandibular ligament. The inferior border is thick, rounded, and continuous with the base. The anterior border is continuous with the oblique line, whilst the upper border presents two processes separated by a deep concavity, the mandibular (sigmoid) notch. Of the processes, the anterior is the coronoid; the posterior, the condylar.

The condylar process consists of the condyle [capitulum mandibulae] and the narrowed portion by which it is supported, the neck. The condyle is oval in shape, with its long axis transverse to the upper border of the ramus, but oblique with regard to the median axis of the skull, so that the lateral extremity, which presents the condylar tubercle for the temporo-mandibular ligament of the temporo-mandibular articulation, is a little more forward than the medial extremity. The convex surface of the condyle is covered with cartilage in the recent 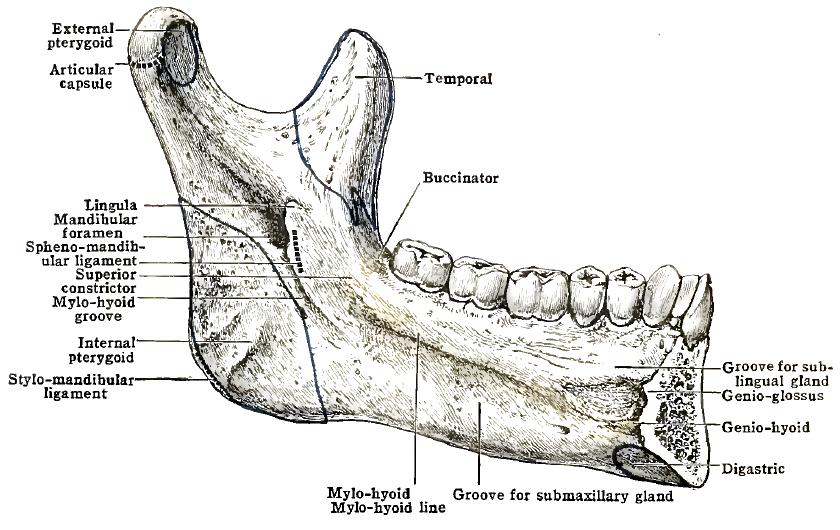 state, and rests in the mandibular fossa; the neck is flattened from before backward, and presents, in front, a depression [fovea pterygoidea] for the insertion of the external pterygoid muscle.

The coronoid process, flattened and triangular, is continued upward from the anterior part of the ramus. The lateral surface is smooth and gives insertion to the temporal and masseter muscles; the medial surface is marked by a ridge which descends from the tip and becomes continuous with the posterior part of the mylo-hyoid line. On the medial surface, as well as on the tip of the coronoid

process, the temporal muscle is inserted. The mandibular notch, the deep semi- lunar excavation separating the coronoid from the condylar process, is crossed by the masseteric nerve and vessels.

Compared with other bones, the superficial parts of the mandible are not so freely supplied with blood. The chief artery is the inferior alveolar which runs in the mandibular canal, and hence, as the bone is exposed to injury and sometimes actually laid bare in its alveolar portion, it often necroses, especially if the artery is involved at the same time.

The mandible is mainly formed by ossification in the fibrous tissue investing the cartilage of the first branchial arch or Meckel's cartilage, although a small portion of the cartilage itself is directly converted into bone.

It is now generally admitted that the lower jaw is developed in a membrane as a single skeletal element. The center of ossification appears in the outer aspect of Meckel's cartilage and gives rise to the bony plate known as the dentary. This plate extends forward right up to the middle line in front, and from it a shelf grows upward for the support of the tooth germs. 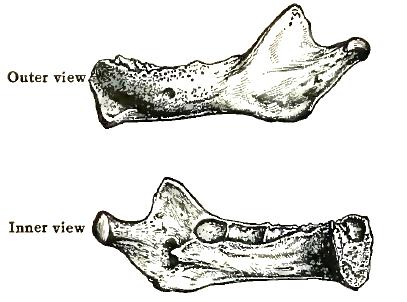 The Mandible at Birth.

Meckel's cartilage lies below and medial to the dentary plate, and the inferior alveolar nerve passes forward between the two structures. Meckel's cartilage itself takes some small part in the formation of the lower jaw. Ossification from the primary nucleus invades the cartilage at a point opposite the interval between the first and second tooth germs, and the resulting bone contributes to the formation of the alveolar margin opposite these two teeth. Behind this point the cartilage atrophies except in so far as it helps to form the spheno-mandibular ligament and the malleus and incus. Behind the symphysis the anterior extremity of the cartilage does not enter into the formation of the jaw, but it usually persists throughout foetal 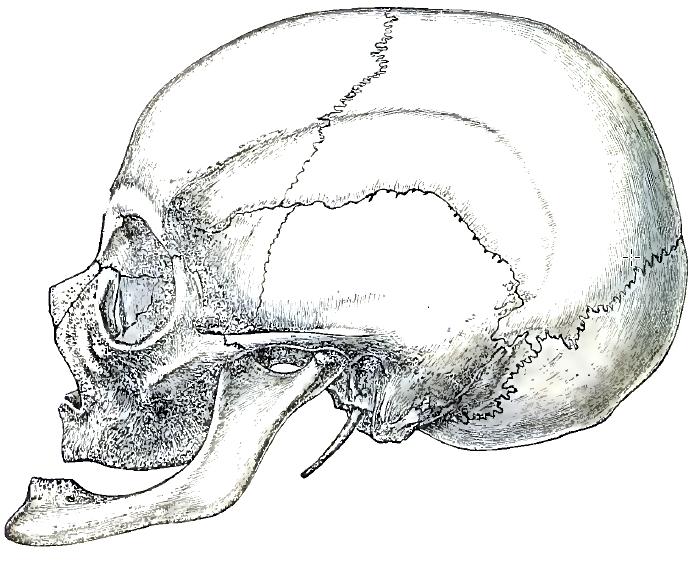 The Skull of a Woman Eighty-three Years Old, to show the Changes in THE Mandible and Maxilla

life as one or two small, rounded, cartilaginous masses. Occasionally they become ossified and give rise to accessory ossicles in this situation. The lamella of bone situated on the medial side of Meckel's cartilage, corresponding to the distinct splenial element in some animals, arises in man as an extension from the dentary element.

In connection with the condylar and coronoid processes, cartilaginous masses are developed. These do not, however, indicate separate elements, but are adaptations to the growth of the lower jaw. 'They are ossified by an extension from the surrounding membrane bone.