The maxillae are two hollow irregular cuboidal bones with two prominent processes. They form a large portion of the facial skeleton.

This bone is occupied by a large cavity, the antrum. The body presents four surfaces. Of these the facial surface looks forwards and outwards and presents the following points of interest: - The socket for the canine tooth causes a low elevation, the canine eminence, having to its inner side the incisive fossa, from which the deprressor alae nasi arises. On the outer side of the eminence is the canine fossa, which gives origin to the levator anguli oris. Above this fossa is the infraorbital foramen, through which the terminal branches of the infra-orbital nerve and artery emerge. From the ridge above this foramen the levator lab a supcrioris arises.

A ridge of bone extending upwards from the socket of the second molar tooth separates the facial from the zygomatic surface. Near the middle of the zygomatic surface are the orifices of the canals for the posterior dental nerves and vessels. The posterior inferior angle of this surface is termed the tuberosity; from it a few fibres of the internal pterygoid muscle arise. This tuberosity is most prominent after eruption of the wisdom tooth; the rough surface along its inner border is for the tuberosity of the palate bone; the smooth surface immediately above forms the anterior boundary of the spheno-maxillary fossa and enters into the formation of the descending palatine canal.

The orbital surface is irregularly triangular and forms the floor of the orbit. Anteriorly it is rounded and forms part of the circumference of the orbit; externally it is rough for suture with the malar bone; the rough surface ends in a backwardly projecting spine which occasionally joins the sphenoid and forms the anterior limit of the spheno-maxillary fissure. The posterior margin, smooth and rounded, forms the inferior limit of the spheno-maxillary fissure. The internal border is nearly straight; quite at the posterior part is a gap for the orbital process of the palate bone; anteriorly it articulates with the os planum of the ethmoid; beyond this it receives the lachrymal bone and in the anterior angle it is smooth and rounded, forming part of the circumference of the orbital orifice of the lachrymal duct. 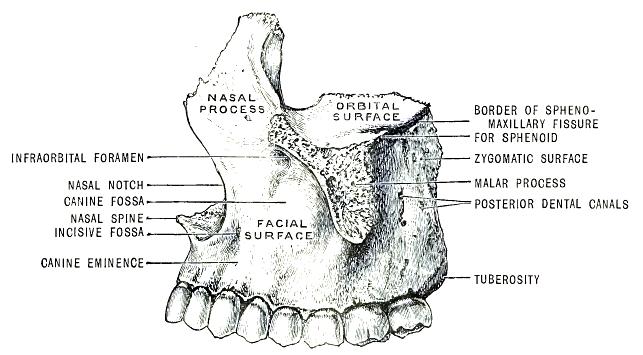 and opens on the facial surface. It transmits the infraorbital artery and nerve. At the termination of the groove a smaller canal tunnels the anterior wall of the antrum and conveys the anterior dental nerves and vessels to the upper incisor, canine and bicuspid teeth. External to the commencement of the lachrymal duct there is a shallow depression from which the inferior oblique takes origin. 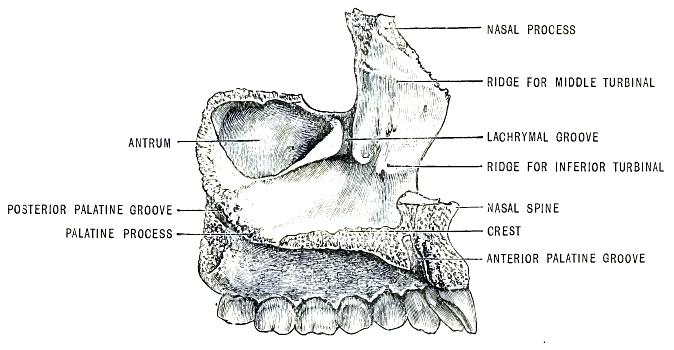 The internal or nasal surface forms the outer wall of the nasal fossa and is prolonged inwards to form part of the floor of this fossa. The posterior half of this surface is deficient and leads by a large irregular aperture into the antrum; below and behind this opening the bone is rough for articulation with the vertical plate of the palate bone. The extreme posterior border receives the tuberosity of the palate bone; the groove in front of it forms part of the posterior palatine canal. Anterior to this surface the bone becomes suddenly smooth; between the smooth and rough portions is the maxillary fissure for the reception of the thin maxillary process on the anterior border of the vertical plate of the palate bone. In the angle between this surface and the nasal process, is a deep groove converted by the lachrymal and inferior turbinal into the nasal duct. Running backwards from the anterior margin is the inferior turbinated crest which articulates with the lowest turbinal bone. The surface above the crest forms part of the middle meatus and the surface below belongs to the inferior meatus of the nose and is directly continuous with the superior surface of the palatine process. Near its anterior border is the orifice of the anterior palatine canal.

The inferior or palatine surface is formed by the palatine process and the alveolar border. The palatine process forms the anterior part of the roof of the mouth. It is concave, rough and pitted with foramina for vessels. Where it joins the alveolar border a groove (sometimes a canal) exists for the anterior palatine nerve and posterior palatine vessels. When the bones of opposite sides are placed in apposition the palatine fossa is formed; running outwards from this to the space between the second incisor and canine tooth, the maxillo-premaxillary suture can be detected in young bones. The posterior border articulates with the horizontal process of the palate bone, whilst the median border joins its fellow to form, above, a prominent crest upon which the vomer is received.

The anterior palatine fossa is situated in the meso-palatine suture near its anterior termination. In its typical form the fossa contains four passages: two are small and disposed one behind the other exactly in the suture; these are the foramina of Scarpa for the naso-palatine nerves, the left nerve emerging from the anterior foramen. The lateral and larger orifices diverge to open on each side of the crest. They are called Stenson's canals and lodge recesses of the nasal mucous membrane and remnants of Jacobson's organs.

The alveolar ridge forms the outer limit of this surface; it is crescentic in shape, spongy in texture and presents cavities in which teeth are lodged. When the teeth are complete in number, eight cavities are present; of these the pit for the canine tooth is the deepest, those for the molars are the widest and present subdivisions. Along the outer aspect of the alveolar border the buccinator arises, as far forward as the first molar tooth.

The nasal process is somewhat triangular, standing vertically from the nasal angle of the maxilla. Its outer surface gives attachment to the orbicularis palpebrarum, the tendo oculi and the levator labii superioris alaeque nasi. The internal surface forms one of the lateral boundaries of the nasal fossa. Superiorly it articulates with the frontal; below this is the superior turbinated crest for articulation with the middle turbinal. The space between this and the inferior turbinated crest forms part of the middle meatus. The anterior border articulates with the nasal bone; the posterior is thick and vertically grooved to form part of the nasal duct. The inner margin of this groove articulates with the lachrymal bone. The point where the outer margin of the groove joins the orbital plate is indicated by the lachrymal tubercle.

The malar process is rough and triangular and forms the summit of the ridge of bone separating the facial and zygomatic surfaces. It articulates with the malar bone and from its inferior angle a few fibres of the masseter take origin.

The antrum or maxillary sinus, as the air-chamber occupying the body of the bone is called, is somewhat pyramidal in shape; the base being represented by the nasal or internal surface, and the apex corresponding to the malar process. In addition to these it has four walls: the superior is formed by the orbital plate and the inferior by the alveolar ridge. The anterior wall corresponds to the facial surface of the maxilla and the posterior is formed by the zygomatic surface. The inner boundary or base presents a very irregular orifice at its posterior part; this is partially filled in by the vertical plate of the palate bone, the uncinate process of the ethmoid, the maxillary process of the inferior turbinal and a small portion of the lachrymal bone. Even when these bones are in situ, the nasal orifice is very irregular in shape and requires the mucous membrane to form the definite rounded aperture (or apertures, for they are often multiple) known as the opening of the antrum. The cavity of the antrum varies considerably in size and shape. In the young it is small and the walls are thick: as life advances, the antrum enlarges at the expense of its walls and in old age they are often of extreme tenuity; occasionally the cavity extends into the substance of the malar bone. The floor of the antrum is, as a rule, very uneven, due to prominences corresponding to the roots of the molar teeth. In most cases the bone separating the teeth from the antrum is very thin and not rarely the roots project uncovered into it. The teeth which come into the closest relationship with the antrum are the first and second molars, but the sockets of any of the teeth lodged in the maxilla may, under diseased conditions, communicate with it. Although, as a rule, the cavity of the antrum is single, yet specimens occasionally come to hand in which it is divided by bony septa into chambers and it is far from uncommon to find it divided into recesses by bony processes. In many maxillae, the roof of the antrum presents near its anterior aspect what appears to be a thick rib of bone; this is hollow and corresponds to the infraorbital canal.

The most satisfactory method of studying the relation of the bones closing in the base of the antrum is to cut away the outer wall of the cavity.

Ossification of the Maxilla.

The maxilla articulates with its fellow and with the frontal, nasal, lachrymal, ethmoid, palate, vomer, malar and inferior turbinal bones. Occasionally it articulates with the greater wing and less frequently with the pterygoid process of the sphenoid bone.

The muscles attached to it are mainly those known as muscles of expression:

The maxilla is a very vascular bone and its arteries are numerous and large. They are derived from the infraorbital, alveolar, descending palatine, naso-palatine, ethmoidal, frontal, nasal and facial branches.

The maxilla arises from four centres which are deposited in membrane.

The various centres may be termed pre-maxillary, maxillary, malar, and pre-palatine. They arise about the eighth week of embryonic life and fuse very rapidly.