The external surface of the occipital bone is convex in its general outline, and presents a little above its center a rough prominence, 3 the external occipital protuberance, the part between which and the superior angle is smooth. Extending obliquely outwards at each side from the protuberance is a rough line, 1 called the superior curved line, to distinguish it from another, which is lower down between it and the great foramen, called the inferior curved line; 4 both are prominent, and give attachment to muscles, as also do the rough depressions between them. These are crossed by a vertical raised line {external occipital crest or sjflne), 3 extending forwards from the protuberance to the foramen magnum. 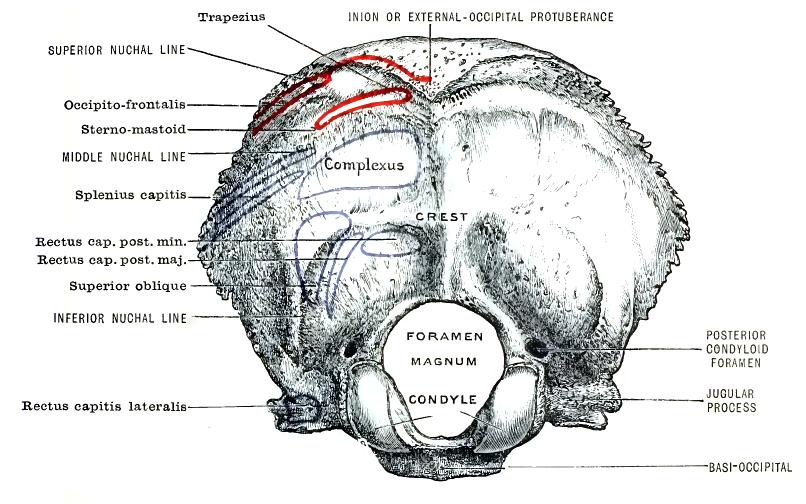 The occipital foramen, 5 (foramen magnum,) which is of an oval figure, (its long diameter extending from before backwards,) gives transmission to the spinal cord, the vertebral arteries, and spinal accessory nerves.

At each side of the foramen, but nearer its anterior part, are situated the articulating processes, 6 (condyles,) two oblong eminences, which articulate with the first vertebra. These converge from behind forwards ; their inferior surface, which in the fresh state is smooth, covered with cartilage, and convex in its general outline, looks downwards and outwards, and is adapted for moving on the concave surface presented by the articulating processes of the atlas. The inner border of each condyle 12 is rough, and receives the insertion of the check ligaments, which extend up from the odontoid process of the axis; the outer border, depressed and not so well marked, gives attachment to the ligament connecting it with the atlas.

External to the fore-part of the condyles are two fossae, in the bottom of which are two foramina, 8 (anterior condyloid,) which look outwards and forwards, and transmit the hypoglossal nerves; behind them are also two larger pits, 7 in which are generally, but not always, found foramina, (posterior condyloid,) which give passage to a vein and small artery: sometimes a foramen exists at one side, and not at the other. External to each condyle is a rough surface, 9 which overhangs the transverse processes of the vertebras, and of which it may be regarded as the " analogue ;" it gives insertion to the rectus lateralis muscle.

The internal surface of the bone is marked by two crucial raised lines or ridges (lineoe cruciatae eminentes,) — one vertical, extending from the upper angle of the bone to the great foramen, and the other transverse from one lateral angle to the other. These intersect towards the central point, 6 (internal occipital protuberance,) and mark off four broad pits, of which the upper pair, 1 (superior occipital fossae,) receive the posterior lobes of the brain, and the lower, 2 (inferior occipital fossae) lodge the lateral lobes of the cerebellum; the superior line 3 and the two transverse ones 5 are generally grooved, and correspond with the course of the longitudinal and lateral sinuses. 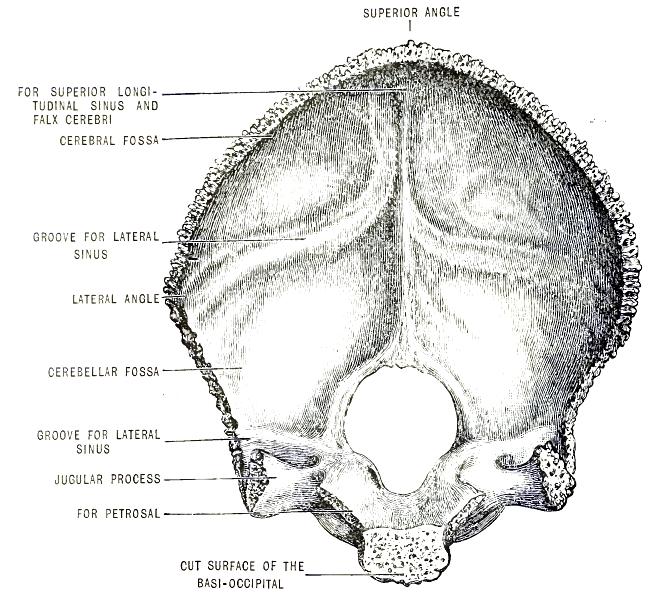 The inferior one, 4 which is commonly named the internal occipital spine or crest, gives attachment to the falx cerebelli. The anterior border of the foramen magnum is slightly excavated, and becomes continuous with the basilar groove, 3 a shallow excavation on the surface of the basilar process, which supports the medulla oblongata; close to the margin of the foramen are the anterior condyloid foramina, and a little external to it are two fossae, 9 marking the terminations of the lateral sinuses. 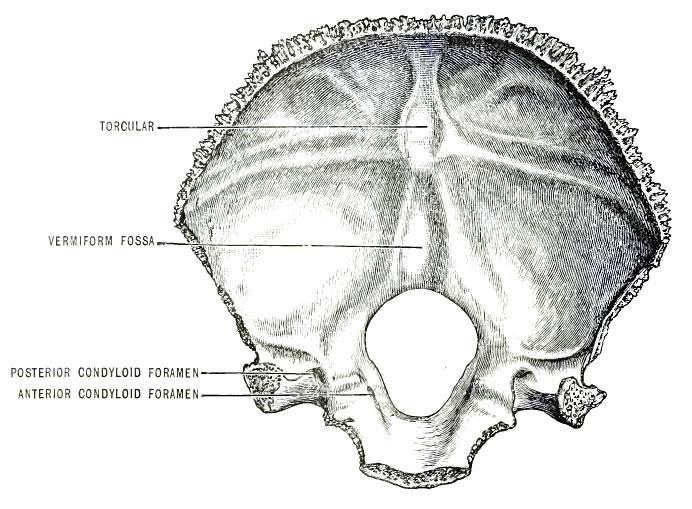 Cerbral surface of the occipital, showing an occasional disposition of the channels.

The thick triangular process which projects forwards into the base of the skull from the foramen, is called the basilar process; its margins are rough, and contiguous to the pars petrosa of the temporal bone ; its under surface presents slight depressions for the insertion of muscles, and the upper one the shallow groove just noticed. Along the lateral margins of this groove, and close to the edges of the bone, are two linear depressions, which form part of the grooves for the inferior petrosal sinuses.

The superior borders 11 of the occipital bone are dentated and converge to a point, but are frequently interrupted by bony islets (ossa triquetra — Wormiana) ; the inferior border at each side is divided into two parts by a prominent piece of bone, 9 the jugular eminence, which surmounts an excavation 10 (jugular notch of fossa) Contributing with the temporal bone to form the foramen lacerum.

The superior angle is acute, and received into the retiring angle formed by the posterior border of the parietal bones ; the anterior is represented by the extremity of the basilar process, which is thick, and in the adult shows the internal structure of the bone, because of being sawed from the sphenoid ; the lateral angles, not very prominent, correspond with the line at which the postero-inferior angle of the parietal bone joins with the mastoid part of the temporal.

The foramen magnum at the sixth year.

In some parts the occipital bone has considerable thickness, especially at the occipital protuberances and the anterior part of the basilar process. In the lower occipital fossa it is very thin.

The occipital articulates with six bones, viz., with the two parietal by its superior borders — the two temporal by the inferior — with the sphenoid by its basilar process — and with the atlas by the condyles.

On each side — the posterior third of the superior curved line gives attachment to the trapezius; its anterior two-thirds to the occipito-frontalis above, and to the sterno-mastoid below: the inner part of the space between the curved lines to the complexus: the external part to the splenius capitis: the space between the lower ridge and the great foramen to the recti (major and minor), and more outwardly to the obliquus superior : the under surface of the jugular eminence to the rectus lateralis: the fossa at the inferior surface of the basilar process to the recti antici (major and minor), and still more ante- B riorly to the superior constrictor of the pharynx.

Ossification of the occipital bone

During a considerable time before and after birth this bone consists of four pieces, — namely, the posterior, proper occipital or proral part : the anterior or basilar : and the two lateral or condyloid.

These pieces meet around the foramen magnum. Each of them requires separate notice.

The Ossification of the occipital bone precedes that of the vertebrae in the time of its appearance. It begins with the proper occipital part. For this division there are four nuclei, which are placed in pairs above and below the occipital protuberance. The two inferior nuclei appear first, and soon join into a single piece. The superior pair of granules unites one to the other also, and the two pieces thus resulting from the four primitive centers uniting speedily form a single mass.

Soon after the posterior part of the bone, the two condyloid pieces begin to ossify (a, b), and they are followed by the basilar portion. Each is formed from a single central point. It is to be observed that the condyles of the occipital bone are not supported altogether on the pieces named condyloid; — a small portion of each is borne by the basilar part.

1 J. F. Meckel (" Handbuch der Menschlich. Anat." B. 2, § 543,) assigns eight primitive granules to this part. Four he makes to correspond with those described in the text.

Of the other four he places two close together at the upper angle of the bone; and the remaining two in its lateral angles, one at each side.

Judging from the usual appearance or texture of the upper and lateral parts of the occipital bone at early periods of its growth, it seems to me to be most probable that the four points found by Meckel in its angles do not occur constantly, or even generally; and if so, may they not be regarded as the centers of some of those separate pieces which are often to be met with in the neighborhood of this bone. I would add, as facts bearing on the question, that an independent lateral nucleus existed only on one side of the preparation by which Meckel seems to have been influenced in forming his judgment on the number of the centres of ossification, (see the figure in his " Archiv. filr die Physiolog." B. 1 Taf. vi. — 1815) ; and that the upper part of the bone is occasionally altogether detached.

At birth the four pieces are distinct, and the posterior one is partially divided by deep fissures, (two being horizontal and one vertical,) extending from the circumference towards its middle. 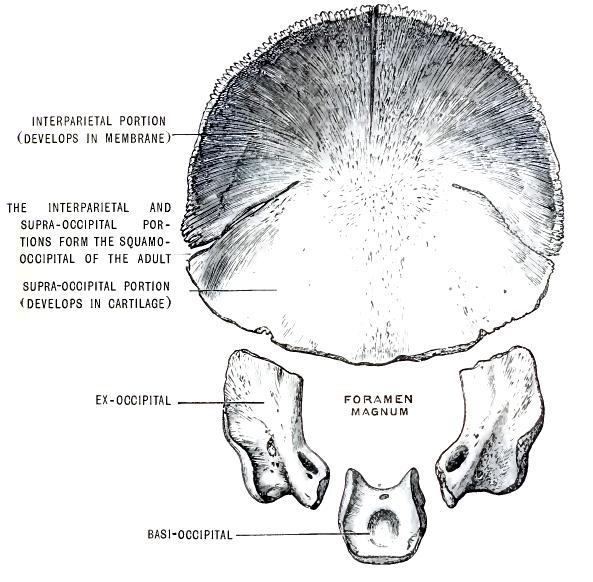 The occipital at birth. (anterior view.)

About the fourth year of age the process of union begins by the junction of the posterior and the two condyloid pieces, and the bone is a single piece about one or two years later. Subsequently the occipital unites with the sphenoid bone, so that, in the adult, the basilar process must be sawed across in order to separate them. And it was in consequence of this circumstance that Soemmering described them as a single bone under the name spheno-occipital or basilar. 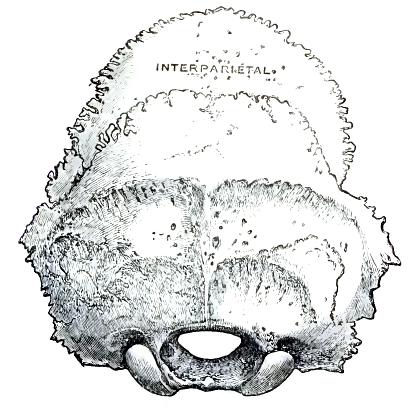 The occipital with a separate interparietal.