The sphenoid bone (French: Sphénoïde) forms a large part of the base of the skull in the region of the anterior and middle fossae. It is very irregular in shape, and is best described as consisting of a body, two pairs of wings, and two pairs of processes.

The body is irregularly cuboidal in shape. The superior surface presents the following points for examination. In front, there is a prominent spine, which is received between the diverging alae of the crista galli, and known as the ethmoidal spine. The surface behind this is smooth, and is formed by the lesser or orbital wings; it frequently presents two parallel longitudinal grooves for the olfactory nerves. This smooth surface is terminated by the optic groove, which lodges the optic chiasma, and leads on each side into the optic foramen. The groove is bounded posteriorly by the olivary eminence, a ridge of bone indicating the line of union of the pre- and post-sphenoid. Behind this ridge the bone presents a deep hollow, the pituitary fossa, in which the pituitary body is lodged. The floor of this fossa presents numerous foramina for blood-vessels, and at birth the superior orifice of a narrow passage termed the cranio-pharyngeal canal. The pituitary fossa presents on each side, slightly posterior to the olivary eminence, a tubercle of variable size, the middle clinoid process. This is occasionally prolonged to meet the anterior clinoid process on the orbital wing. The posterior boundary is formed by a quadrilateral plate of bone, the dorsum ephippii. The superior angles of this plate are surmounted by the posterior clinoid processes, which give attachment to the tentorium cerebelli. A little below the clinoid process, on each side of the dorsum ephippii, there is a deep notch, converted into a fora- men by the dura mater, for the passage of the sixth cranial nerve. The dorsum is slightly concave posteriorly, and supports the basilar artery and the pons Varolii.

The sphenoid. (viewed from above.)

The inferior surface of the body has a prominent median ridge, the rostrum, which is received between the alae of the vomer. The rest of the surface is rough, and Covered by the mucous membrane belonging to the roof of the pharynx.

The anterior surface presents in the middle line a vertical ridge of bone, the sphenoidal crest, which articulates with the perpendicular plate of the ethmoid. On each side of the crest, a more or less circular orifice leads into the sphenoidal sinuses. These sinuses are irregularly shaped, unsymmetrical cavities, separated from each other by a thin vertical septum; in adult bones they may extend into the roots of the pterygoid processes, and even into the base of the occipital bone. The sinuses communicate with the nasal fossa of their respective sides. The lateral margins of the anterior surface are serrated for articulation with the posterior border of the os planum on each side of the ethmoid. The superior margin articulates with the cribriform plate of the ethmoid.

The posterior surface is, in the adult, ankylosed to the basi-occipital. The two bones are separated by a disc of hyaline cartilage until the eighteenth year; by the twenty-fifth year ankylosis is complete.

On each side of the body there is the broad sinuous cavernous groove, which lodges the internal carotid artery and the cavernous sinus. The process of bone over which this artery turns is the lingula; it constitutes a flying buttress for the support of the greater wings.

The lesser or orbital wings (orbito-sphenoids) are thin, triangular, horizontal plates of bone resting upon that portion of the sphenoid anterior to the olivary ridge (pre- sphenoid). The superior surface of each wing is smooth and slightly concave, and forms the posterior part of the anterior fossa of the skull; the under surfaces constitute a portion of the roof of each orbit, and bound superiorly the sphenoidal fissures. The anterior border is serrated for articulation with the horizontal plate of the frontal bone. (The orbital wings meet over the pre-sphenoid and almost exclude it from the cranial cavity.) The posterior border, smooth and rounded, is received into the Sylvian fissure of the cerebrum. The inner extremity is prolonged to form the anterior clinoid process to which the tentorium cerebelli is attached. Each lesser wing is connected to the body of the bone by two processes or roots; of these, the upper is thin and flat, the lower one is thicker, and presents near its junction with the body a small tubercle for the attachment of the common tendon of three ocular muscles. The space between the roots is the optic foramen, and transmits the optic nerve and ophthalmic artery. 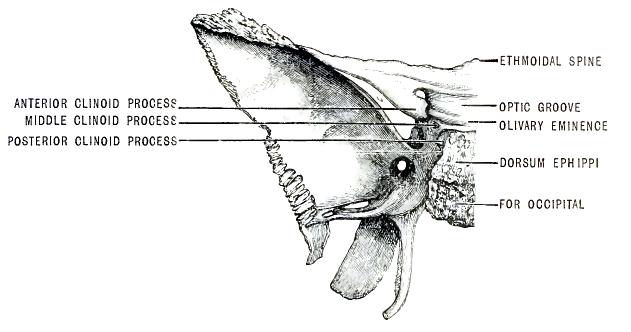 The left half of the sphenoid.

The greater wings (ali-sphenoids) are two large plates of bone ankylosed to the body by means of the lingulae. Each wing has three surfaces. The superior or cerebral surface is concave and smooth; it receives the temporo-sphenoidal lobe of the cerebrum, and presents several foramina. At the anterior and internal part is the foramen rotundum for the second division of the fifth nerve; behind and external to this is the foramen ovale, for the motor root and the third division of the fifth nerve, the small petrosal nerve, and the small meningeal artery. Behind and external to the foramen ovale is the small circular foramen spinosum, for the middle meningeal artery and its venae comites. To the inner side of the foramen ovale a small opening, the foramen Vesalii, is occasionally present; it transmits a vein. A foramen may exist near the foramen ovale for the small superficial petrosal nerve. The external surface is divided by the prominent malar crest into an orbital and a temporo-zygomatic portion. The orbital surface forms the chief part of the outer wall of the orbit; its internal segment forms part of the spheno-maxillary fossa, and presents the anterior orifice of the foramen rotundmn. Near the middle of the upper border there is a small tubercle for the origin of the outer head of the external rectus muscle; and at the highest part of this surface one or more foramina are often present, for the transmission of twigs from the middle meningeal artery to the orbit and the lachrymal gland. The malar crest is serrated for articulation with the malar bone; its lower angle, in many bones, articulates with the maxilla. A foramen exists in the suture between the sphenoid and malar, for the temporal twig of the orbital nerve. The surface of bone outside this ridge is subdivided by a low crest, the pterygoid ridge. The surface above the ridge forms part of the temporal fossa, and affords attachment to the temporal muscle ; the part behind the crest belongs to the zygomatic fossa, it furnishes attachment to the external pterygoid muscle, and is continuous with the outer surface of the external pterygoid plate ; it contains the inferior orifices of the foramina spinosum, ovale, and Vesalii.

The circumference of the great wing, commencing at its anterior attachment to the body, is at first smooth, and forms the lower boundary of the sphenoidal fissure ; this serves for the passage of the third, fourth, first division (ophthalmic) of the fifth, and the sixth nerves, with the ophthalmic vein. External to this, the margin is broad and serrated for the frontal bone ; quite at the tip it is beveled on its inner aspect for the anterior inferior angle of the parietal ; behind this, the edge, at first thin and beveled, becomes gradually broader, and deeply serrated for the squamosal, and runs into the prominent alar spine of the sphenoid, to which the spheno-mandibular ligament is attached. That portion of the circumference extending from the spine to the body of the sphenoid articulates by the outer third with the petrosal, but the inner two-thirds forms the anterior boundary of the foramen lacerum medium, and contains the posterior orifice of the Vidian canal. 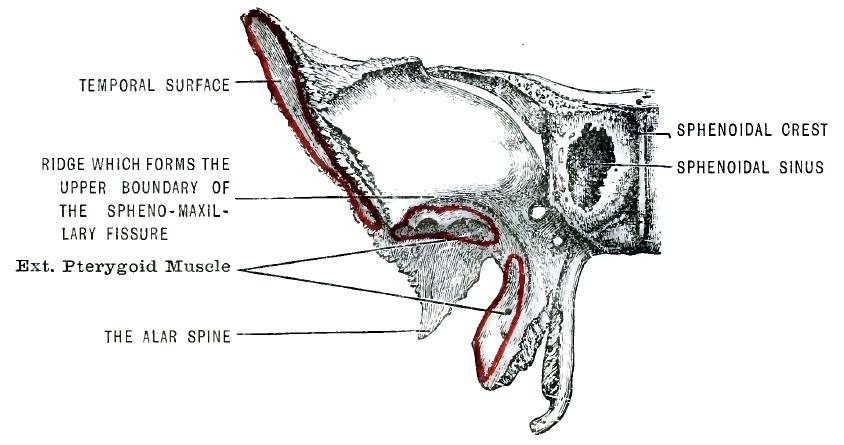 Right half of sphenoid. (Anterior view.)

The internal pterygoid plate is narrower and longer than the external. Its inner surface forms part of the outer boundary of the nasal fossa, and by a thin ledge of bone, called the vaginal process, extends to the under surface of the basi- sphenoid to articulate with the ala of the vomer, and anteriorly with the sphenoidal process of the palate bone. Immediately above this ledge of bone is the pterygo- palatine groove (converted into a canal by the sphenoidal process of the palate bone), for an artery and nerve of the same name. At the point where the internal pterygoid plate comes into relation with the great wing and the lingula, there is the Vidian canal. This canal is 3 cm. long, and transmits the Vidian nerve and artery. The outer surface of the internal pterygoid plate forms the inner boundary of the pterygoid fossa; its posterior border is prolonged into a hamular process, smooth on its under aspect, for the bursa between it and the tensor (circumflexus) palati. From the lower third of the posterior border and the hamular process the superior constrictor of the pharynx takes origin.

The recess between the two pterygoid plates posteriorly is subdivided. The upper, smaller and shallower depression is the scaphoid fossa; it gives origin to the tensor (circumflexus) palati. The lower, deeper and larger, is the pterygoid fossa; it lodges the internal pterygoid and tensor palati muscles. The fossa is completed by the tuberosity of the palate bone.

The under surface of pre-sphenoid at the sixth year.

It gives origin to the following muscles:

The sphenoid has numerous intrinsic ligaments which occasionally ossify and produce adventitious foramina. Of these, the most important are:

Several other insignificant bands have received names, but they are of no importance.

The sphenoid is ossified in cartilage from twelve ossific nuclei which appear in pairs. The nuclei are divisible into two sets, - those for the pre- sphenoid, and those for the post-sphenoid.

The post-sphenoid centers consist of four pairs disposed as follows: one for each ali-sphenoid (great wing). A pair of median nuclei for the basi- sphenoid, and a nucleus for each lingula (sphenotic nucleus), and one for each internal pterygoid. The external pterygoid is an outgrowth from the great wing.

The pre-sphenoid centers consist of a nucleus for each orbito-sphenoid (lesser wings), and a median pair for the body of the pre-sphenoid. These nuclei appear at intervals from the eighth week to the end of the third month in the following order: ah-sphenoid, basi-sphenoid, hnguLT, internal pterygoids, orbito-sphenoid, and pre-sphenoid. The various earthy spots fuse together, so as to form at birth three pieces. The median piece consists of the basi-sphenoid and lingula, con- joined with the pre-sphenoid carrying the lingulae; the two lateral pieces are the ali- sphenoids (greater wings) carrying the internal pterygoid plates. The greater wings are joined to the lingulae by cartilage. The dorsum ephippii is cartilaginous at birth. In the course of the first year the orbito-sphenoids fuse in the middle line to form the jugum sphenoidale, which excludes the anterior part of the pre-sphenoid from the cranial cavity. The greater wings fuse with the lingulae in the course of the first year.