These bones (often referred to as the bones of Bertin) are two hollow cones, flattened externally in three planes. They may be obtained as distinct ossicles about the fifth year. At this date they are wedged in between the under surface of the pre-sphenoid and the orbital and sphenoidal processes of the palate bone. The apex of the cone is directed backwards and appears near the vaginal process of the sphenoid. Of its three surfaces, the outer one is in relation with the spheno-maxillary fossa, and occasionally extends upwards between the sphenoid

The Sphenoidal Turbinal at the Sixth Year.

At birth these bones are visible as small triangular ossifications in the perichondrium of the ethmovomerine plate near its junction with the pre-sphenoid.

The Sphenoidal Turbinals from an Old Skull.

By the third year they have become hollow cones, the circular orifice representing the base eventually becoming the orifice of the sphenoidal sinus. As the cavity enlarges, the median wall atrophies so that the inner wall of the sinus is formed by the pre-sphenoid. As the turbinal enlarges it ankyloses with adjacent bones. In many skulls it joins the lateral mass of the ethmoid; more frequently it fuses with the pre-sphenoid; less frequently with the palate. After the twelfth year they can rarely be separated from the skull without damage. In many disarticulated skulls they are so broken up that a portion is found on the sphenoid, fragments on the palate bones, and the remainder attached to the ethmoid.

Sometimes, even in very old skulls, they are represented by a triangular plate of extreme tenuity on each side of the rostrum of the sphenoid.

These are a pair of delicate, scroll-like bones, and may be regarded as dismemberments of the lateral masses of the ethmoid, with which they are closely related. Each bone presents two surfaces, two borders, and two extremities.

The outer surface is concave, and overhung by the auricular or maxillary process. The inner surface is convex and pitted with depressions. The superior border presents from before backwards three processes : the first is called the lachrymal process, because it articulates with the turbinal process of the lachrymal bone. The margin of bone at the base of this process comes into relation with the nasal process of the maxilla. The second vertical spiculum is the ethmoidal process, which joins the uncinate process of the ethmoid. The third or maxillary process is a thin lamella of bone, turned downwards; it overhangs the orifice of the maxillary sinus and serves to fix the bone firmly to the outer wall of the nasal fossa. The margin posterior to the maxillary process comes into relation with the inferior turbinal crest of the palate bone. The inferior border is rounded and free. It is the thickest part of the bone. The extremities are narrow, the posterior being the more pointed. 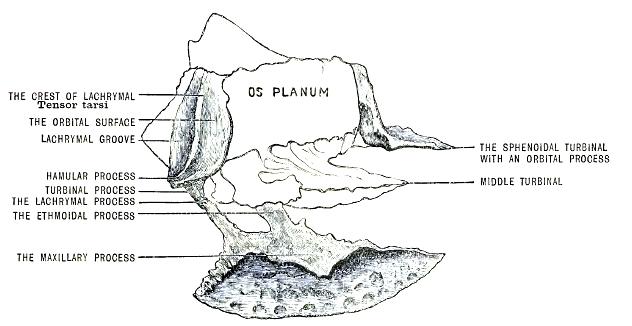 The inferior turbinal articulates with the maxilla, lachrymal, palate, and ethmoid.

The inferior turbinal is ossified from a single nucleus which appears about the fifth month of intra-uterine life.

At birth it is a relatively large bone and fills up the lower part of the nasal fossa.