The zygomatic [os zygomaticum] or malar bone forms the prominence known as the cheek and joins the zygomatic process of the temporal with the maxilla. It is quadrangular in form with the angles directed vertically and horizontally. The malar (or external) surface is convex and presents one or two small orifices for the transmission of the zygomatico-facial nerves and vessels. It is largely covered by the orbicularis oculi and near the middle is slightly ele- vated to form the malar tuberosity, which gives origin to the zygomaticus and zygomatic head of quadrate muscle of upper lip.

The temporal (or internal) surface is concave and looks into the temporal and infratemporal fossae; it is excluded from the orbit by a prominent curved plate of bone, the orbital process, which forms the anterior boundary of the temporal fossa. The upper part gives origin to a few fibers of the temporal muscle, while at the lower part is a large rough area for articulation with the zygomatic process of the maxilla.

The orbital process is placed at right angles to the remaining part of the bone and forms the anterior portion of the lateral wall of the orbit. On the orbital

The Left Zygomatic Bone. A, the malar surface. B, the temporal and orbital surfaces.

surface of the process are seen the foramina of two zygomatico-orbital canals, which transmit the zygomatico-facial and zygomatico-temporal branches of the zygomatic branch of the fifth, together with two small arteries from the lacrimal. In some cases, however, the canal is single at its commencement on the orbital plate and bifurcates as it traverses the bone. The rough free edge of the 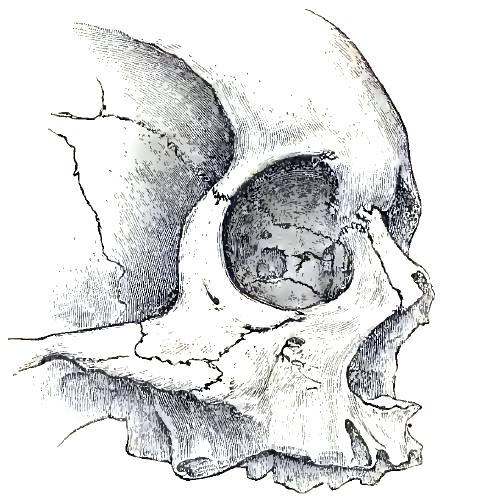 Skull showing the Right Malar Bone Divided into Two Parts by a Horizontal Suture. (From a specimen in the Museum of University College, London.)

process articulates above with the zygomatic border of the great wing of the sphenoid, and below with the maxilla. When the orbital process is large, it excludes the great wing of the sphenoid from articulation with the maxilla, and the border then presents near the middle a short, non-serrated portion which closes the anterior extremity of the inferior orbital (spheno-maxillary) fissure.

All the four angles of the zygomatic bone have distinguishing formes. The superior, forming the fronto-sphenoidal process, is the most prominent, and is serrated for articulation with the zygomatic process of the frontal; the anterior or infra-orbital process, sharp and pointed, articulates with the maxilla and occasionally forms the superior boundary of the infra-orbital foramen; the posterior or temporal process is blunt and serrated mainly on its medial aspect for articulation with the zygomatic process of the temporal; the inferior angle, blunt and rounded, is known as the malar tubercle.

Of the four borders, the orbital is the longest and extends from the fronto-sphenoidal to the infra-orbital process. It is thick, rounded, and forms more than one-third of the circumference of the orbit; the temporal border, extending from the fronto-sphenoidal to the temporal process, is sinuously curved and gives attachment to the temporal fascia. Near the frontal angle is usually seen a short elevation, the processus marginalis, to which a strong shape of the fascia is attached; the masseteric border, thick and rough, completes the lower edge of the zygomatic arch and gives origin to the anterior fibers of the masseter; the maxillary border, rough and eon- cave, is connected by suture with the maxilla, and near the margin of the orbit gives origin to the infra-orbital head of the guadratus labii superioris.

The arteries of the zygomatic are derived from the ^infra-orbital, lacrimal, transverse facial, and deep temporal arteries.

With the maxilla, frontal, temporal, and sphenoid.

The zygomatic is ossified in membrane from three centers which appear in the eighth week of intra-uterine life. The three pieces, which have received the names of premalar, postmalar, and hypomalar, unite .about the fifth month. Occasionally the primary nuclei fail to coalesce, and the bone is then represented in the adult by two or three portions separated by sutures. In those cases in which the premalar and postmalar unite and the hypomalar remains distinct, the suture is horizontal; if the independent portion is the premalar, then the suture is vertical. The bipartite zygomatic has been observed in skulls obtained from at least a dozen different races of mankind, but because of the greater frequency in which it occurs in the crania of the Japanese (seven per cent.), the name of of Japonicum has been given to it.