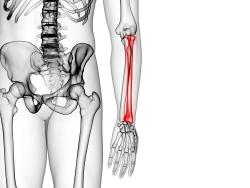 The radius (French : Radius), shorter than the ulna by the length of the olecranon process, is placed at the external side of the fore-arm, extending from the humerus to the carpus. It is broader below than above, slightly curved in its form, and divided into a body and two extremities.

As the body, or shaft, is somewhat triangular, we observe on it three surfaces, bounded by three margins, or ridges. The anterior surface expands towards the lower part, and is marked along its middle by a longitudinal groove for the flexor pollicis longus; superiorly is situated the foramen for the medullary vessels, its direction being from below upwards ; and inferiorly a flat surface, corresponding with the pronator quadratus. The posterior surface, convex in the greater part of its extent, is grooved at its central third, for the origin of the extensors of the thumb; the external surface, round and convex, is marked towards its middle by a rough impression, which gives insertion to the pronator radii teres. Of the margins separating these surfaces, the posterior is distinct only at the middle part; the external is round, and becomes smooth towards the lower extremity; whilst the internal is acute and sharp, for the attachment of the interosseous ligament. The body is terminated superiorly by a rough prominence (tuber radii,) termed the bicipital tuberosity, from its giving insertion to the biceps muscle.

Above the tuberosity the bone becomes narrowed and constricted into the form of a neck, which is again surmounted by the head, intended by its extremity to articulate with the round convex part of the lower extremity of the humerus, its small head, while its margin rolls on the lesser sigmoid cavity of the ulna. The margin is smooth and convex; the upper surface, also smooth, is a shallow cup-like cavity; and both are covered with cartilage in the recent state.

The radius at its lower part becomes broad and thick; the anterior surface is flat and expanded, being covered by the pronator quadratus muscle; it is bounded below by a prominent line, which gives attachment to the anterior ligament of the wrist-joint. The posterior surface is convex, and marked by longitudinal grooves, which transmit the tendons of the extensor muscles; of these, one, which is very narrow and oblique in its direction, and nearly in the middle line, lodges the tendon of the extensor pollicis (secundi internodii). At the inner or ulnar side of this is placed another, much broader, which transmits the tendons of the extensor communis and indicator; and at its outer side a third, divided into two parts by a linear impression, marks the passage of the flexor carpi radialis, longior and brevior. Corresponding with the external border of the bone is another groove, directed obliquely forwards, and divided into two parts, for the tendons of the extensores — primi internodii and ossis metncarpi pollicis. The outer side of the bone, particularly the part corresponding with the ridge which separates the two latter grooves, is prolonged downwards, and named the styloid process; it affords attachment to the external lateral ligament of the wrist-joint. On the inner side of the bone is situated a small cavity, (semilunar,) covered by cartilage, which articulates with the inferior extremity of the ulna. At its inferior extremity the radius presents its carpal articulating surface, scaphoid (navicular), which is included between the base of the styloid process and the oval cavity just mentioned, bounded before and behind by two rough margins for the attachment of the radio-carpal ligaments. It is divided from before backwards, by a line, into two unequal portions, of which the external is triangular, and articulates with the scaphoid bone; the internal is square, and articulates with the semi-lunar.

The anterior surface of the body, by its grooved part, to the flexor longus pollicis; by the oblique line, leading from the tuberosity to the insertion of the pronator radii teres, to the supinator brevis and flexor sublimis; its inferior fifth to the pronator quadratus; the posterior surface, by a slight concavity in the middle, to the extensores pollicis; the external margin, by a rough surface, to the pronator teres; inferiorly, to the pronator quadratus and the supinator radii longus; whilst the posterior part of the bicipital tuberosity gives attachment to the biceps muscle.

The radius articulates with the humerus, the ulna, the scaphoid and semilunar bones.

The radius is formed from three points of ossification. In the shaft osseous matter begins to form at its middle immediately after the process has commenced in the humerus, and before the vertebrae. The ossification from this center extends nearer to the upper than to the lower end of the bone.

At the ordinary time of birth the radius is ossified except the ends, which are both cartilaginous.

A nucleus is deposited in the lower end in the course of the end of the second year, and in the upper one before the fifth year. The epiphysis formed from the latter is flat and very thin. It joins the bone about the age of puberty. The lower epiphysis, of greater size, is united about the twentieth year.