anatomy of the human scapula

The scapula (French : scapula, omoplate), is placed upon the upper and back part of the thorax, occupies the space from the second to the seventh rib, and forms the posterior part of the shoulder. Its form is irregularly triangular and flat. It presents for examination two surfaces, three borders, and three angles.

The anterior surface (fossa subscapularis, venter) looks towards the ribs, is triangular, slightly concave, intersected by prominent lines directed from within outwards and upwards and therefore crossing the direction of the ribs.

The posterior surface (dorsum scapulae) is divided into two parts, but unequally, by a prominent ridge, the spine. The superior one is called fossa supra-spinata; the inferior, fossa infra-spinata.

The spine of the scapula is a prominent ridge of bone, flattened from above downwards, commencing at the posterior border of the scapula, with a smooth flat triangular surface, from which it becomes gradually more elevated as it proceeds forwards, until it terminates in an elongated process, (acromion,) which surmounts the shoulder-joint The form of the spine, considered by itself apart from the acromion, is triangular; hence, we have to notice its two surfaces and three borders. Its superior surface is concave and conjointly with the superior part of the dorsum of the scapula, forms the fossa supra-spinata.

The inferior surface is irregularly triangular, constitutes part of the infra-spinous fossa and in its middle may be observed a small foramen, for a nutritious vessel.

On the projecting border of the spine, which is rough and broad, may be noticed two margins, of which the superior one gives attachment to the trapezius, the inferior to the deltoid muscle; the intervening edge is subcutaneous. The anterior or attached border or base is united with the dorsum of the bone. The external border which is short, rounded and somewhat concave, approaches the neck of the bone and is continuous with the under surface of the acromion.

Of the acromion process

This considerable eminence is flattened in the direction opposite to that of the spine and projecting outwards and forwards, forms the summit of the shoulder-joint; hence its designation (a summit in greek, the shoulder in Greek). Its posterior and upper surface, convex and somewhat rough, is subcutaneous ; the anterior and inferior one, concave and smooth, is in relation with the supra-spinatus muscle, and overlays the capsular ligament of the shoulder-joint; the superior border presents, anteriorly, a narrow, oval surface for its articulation with the external extremity of the clavicle and its summit affords attachment to the coraco-acromial ligament.

The fossa supra-spinata, wider towards its vertebral than the other extremity, is filled up by the supra-spinatus muscle. The fossa infra- spinata, much larger than the preceding, is convex in the middle, somewhat concave, or rather grooved inferiorly. Between the latter part and the axillary border is a slightly raised and elongated ridge, which extends from the glenoid cavity obliquely downwards to within an inch of the posterior angle of the bone, where it subsides into a flat and nearly quadrilateral surface. This latter part it is that gives origin to the teres major muscle, and over it slides the latissimus dorsi. Along the upper and rounded part arise the fibres of the teres minor; whilst the line of division between them marks the attachment of an aponeurosis, common to these muscles and to the infra-spinatus, which occupies the remainder of the fossa.

Of the three borders of the scapula or costae (as they are sometimes called) the superior is the shortest; at its outer part is situated a lunated notch (coracoid notch,) (lunula; incisura semilunaris,) which is converted into a foramen by a ligament, and is traversed sometimes by the suprascapular vessels and nerve, but usually by the nerve alone. In front and external to this opening is the coracoid process,  which being thick, elongated, and curved on itself, is named, from some fancied resemblance to a crow's beak (A crow in Greek ; form in Greek). This process, superiorly convex and unequal, gives attachment to the coraco-clavicular ligament ; anteriorly, to the pectoralis minor muscle ; posteriorly, to the coraco-acromial ligament; and by its extremity to the short head of the biceps and coraco-brachialis muscles. The posterior, or vertebral border, named also the base of the scapula, is the longest of the three ; superiorly it approaches to the vertebral column, inferiorly it is more removed from it. The portion of this border which is above the spine will be observed to incline a little outwards. For the purpose of more easily assigning the attachments of the several muscles which are connected with it, we may regard it, though very thin, as divisible into two margins, with an interspace; these are stated in the enumeration of the muscular attachments. The axillary border is inclined downwards and backwards from the lower margin of the glenoid cavity to the inferior angle of the bone ; hence it is named the inferior costa of the scapula. It is of considerable thickness, being surmounted posteriorly by the ridge above noticed as giving origin to the teres minor. The edge itself presents a shallow groove running along the greater part of its extent. It corresponds with the lower border of the subscapular muscle. For about an inch beneath the glenoid fossa there is a well-marked linear impression, which gives origin to the long head of the triceps muscle.

The postero-superior angle is formed by the junction of the base with the superior costa of the scapula; it is somewhat inclined out-wards. The inferior angle is placed at the union of the base with the axillary or inferior border of the bone; upon it may be observed an elongated flat surface which gives origin to the teres major, and over which slides the latissimus dorsi muscle. At the convergence of the superior and inferior borders may be observed a narrow constricted part denominated the neck.

The neck (cervix scapulae) separates the glenoid fossa and the coracoid process from the rest of the bone. It is bounded below by a slightly raised rim which gives attachment to the fibrous capsule of the shoulder-joint ; and finally the rim surrounds the articular surface of the bone which is called the glenoid cavity (a superficial cavity in Greek). This is a shallow, oval depression, broader below than above, covered with cartilage in the fresh state, and deepened somewhat by a fibro-cartilaginous border, which passes round it from the long tendon of the biceps muscle, whose origin is at its upper margin; its longest diameter is perpendicular, its direction outwards and forwards. In this last respect, however, it varies considerably; for during the more extended motions of the humerus, the scapula is made to turn, as it were, on a pivot driven through the center of its dorsum, by which means the glenoid cavity is kept constantly in apposition with the head of the humerus, which is the chief security against its dislocation.

The scapula articulates by its glenoid cavity with the humerus, and by the acromion process with the clavicle.

It affords attachment to the following muscles

The subscapular fossa (the anterior or costal surface of the bone) to the subscapularis muscle. Posterior or dorsal surface, — the spine (by its border and the acromion) superiorly to the trapezius, inferiorly to the deltoid : the fossa supra-spinata, by its posterior two-thirds, to the muscle of the same name ; the fossa infra-spinata, in the greater part of its extent, to the infra-spinatus ; by a slight oblique line situated near the inferior angle, to the aponeurosis common to the infra-spinatus, teres minor, and teres major ; by a narrow rounded surface, near the axillary border, to the teres minor; by the flat surface, at its inferior angle, to the teres major.

The inferior angle to the teres major, and occasionally to some fibres of the latissimus dorsi; the anterior angle (glenoid cavity), by its upper margin, to the long head of the biceps muscle.

The scapula has several centers of ossification, and the greater part of the bone, as in most other cases, is formed from one of them. This nucleus appears at the time that osseous matter is first deposited in the vertebrae, and from it the ossification spreads in different directions, to the spine, the glenoid cavity, and in short over all the bone, except the coracoid process, the acromion, the lower angle, and the base, each of which is a distinct formation.

At birth the parts last named are cartilaginous.

An osseous granule appears in the middle of the coracoid process, usually in the course of the first year after birth, and this part being largely ossified, is joined, or about to join, the rest of the scapula when the remaining pieces begin to form.

The additional centers of ossification succeed one another rapidly, between the fifteenth and seventeenth years, generally showing themselves in the following order: 1.-in the acromion near the base; and in the upper part of the coracoid process; 2.-the lower angle; 3.-again in the acromion; 4. the base. The several pieces constructed from these nuclei may be regarded as epiphyses. Each of them requires some remark.

The base of the acromion is an extension from the primary center of ossification through the spine, and the extent to which the ossification from this source reaches varies in different cases. The remainder of the process is produced from two or more irregular nuclei, which unite one to the other, and form a single piece to be subsequently joined to the spine, or rather to the projection from this.

On the convex part of the coracoid process where it turns forward, a thin scale (an epiphysis) forms after the process has been joined to the general mass of the scapula. I have observed this epiphysis to be in general broad at the upper part, and to taper downwards to the notch on the upper margin of the scapula.

The lower angle and the contiguous part of the base are always ossified separately. The remainder of the base is also to be considered a distinct growth; but from the appearance of completeness presented by its upper part in some scapulas of young bodies, I think it not unlikely that a portion of it is occasionally formed by extension from the general ossification of the bone. The point, however, requires further investigation.

The epiphyses are joined to the bone between the ages of twenty-two and twenty-five years.

Anterior view of the Scapula 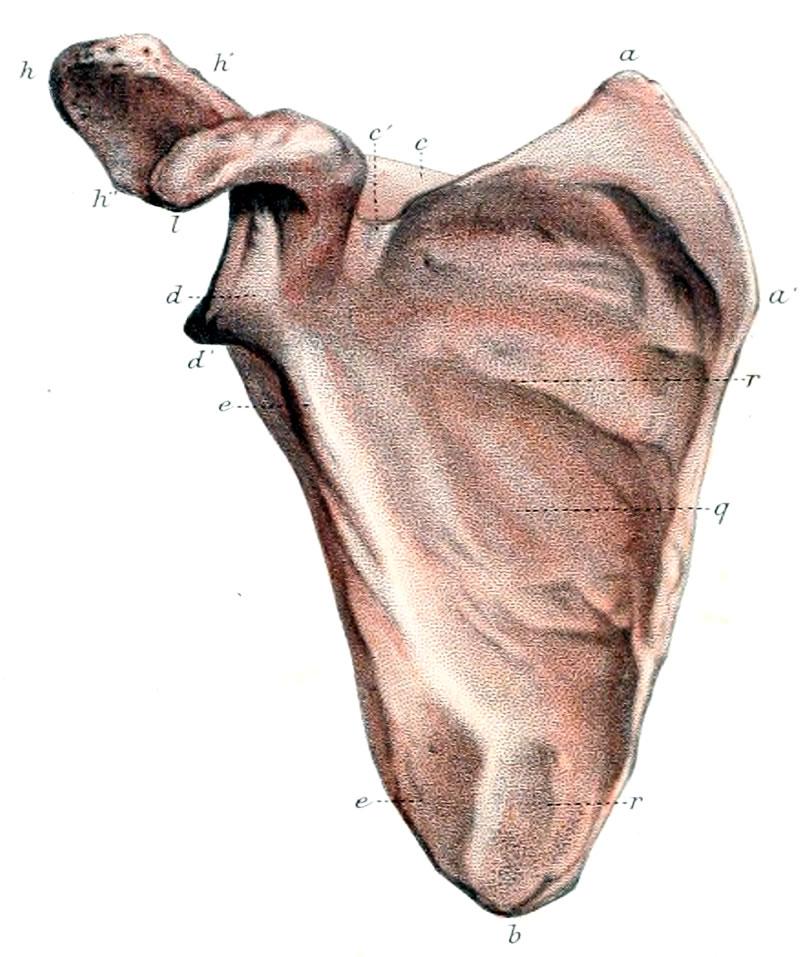 Posterior view of the Scapula 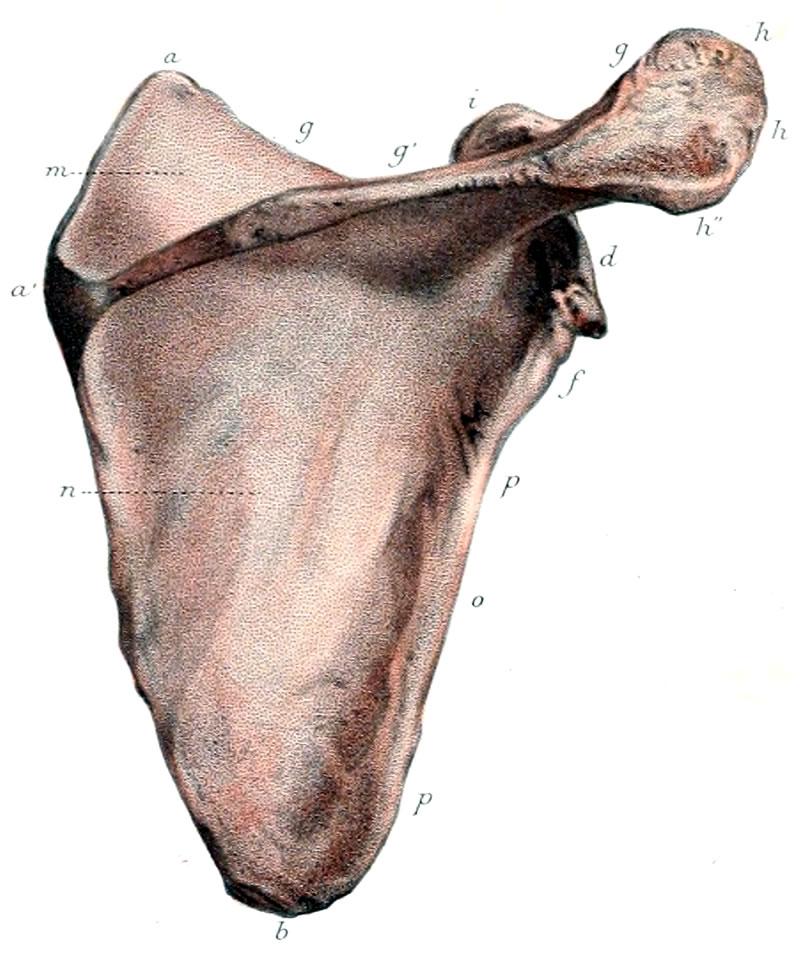