The cervical vertebrae (french: vertèbres cervicales) are seven in number; they are smaller than those in the other regions, which results from the size of the body and processes being less than that of the corresponding parts in the dorsal and lumbar classes. The vertebral foramen is of a triangular form, and larger proportionally than in the other classes.

A typical cervical vertebra (from the third to the sixth inclusive) presents the following characteristics:

The body is smaller than in other regions of the column and is of oval shape with the long axis transverse. The lateral margins of the upper surface are raised into prominent lips, so that the surface is concave from side to side; it is also sloped downward in front. The inferior surface, on the contrary, projects downward in front and is rounded off at the sides to receive the corresponding lips of the adjacent vertebra. It is concave antero-posteriorly and convex in an opposite direction.

The roots (pedicles) are directed laterally and backward and spring from the body about midway between the upper and lower borders. The superior and inferior notches are nearly equal in depth, but the inferior are usually somewhat deeper. The laminse are long, narrow, and slender. The spinous process is short and bifid at the free extremity.

Both the superior and inferior articular processes are situated at the junction of the root with the lamina and they form the upper and lower extremities of a small column of bone. The articular surfaces are oblique and nearly flat, the superior looking backward and upward, and the inferior forward and downward.

The transverse process presents near its base a round costo-transverse foramen [foramen transversarium] for the transmission of the vertebral artery, vein, and a plexus of sympathetic nerves. Moreover, each process is deeply grooved above for a spinal nerve, and is bifid at its free extremity, terminating in two tubercles - anterior and posterior. The costo-transverse foramen is very characteristic of a cervical vertebra. It is bounded medially by the pedicle, posteriorly by the transverse process (which corresponds to the transverse process of a thoracic vertebra), anteriorly by the costal process (which corresponds to the rib in the thoracic region), and laterally by the costo-transverse lamella. The latter is a bar of bone joining the two processes and directed obliquely upward and forward in the upper vertebrae and horizontally in the lower. The vertebral foramen is triangular with rounded angles, and is larger than in the thoracic or lumbra vertebrae.

This vertebra has neither body nor spinous process; it is an irregular ring of bone with two thicker portions, the lateral masses, united anteriorly by a bridge, the anterior arch, which constitutes one-fifth of the entire circumference. This arch presents a tubercle on its anterior face for the anterior vertebral ligament and the longus colli muscle; its posterior surface has a circular facet for the odontoid process of the axis. The upper and lower borders are for ligaments.

The lateral masses are united posteriorly by a larger arch of bone, forming two-fifths of the circumference. Posteriorly this arch has a tubercle, representing a rudimentary spinous process. The upper and under surfaces of the arch afford attachment to ligaments. At the junction of the arch with the lateral masses, there is, on the upper surface, a deep groove which lodges the vertebral artery and the suboccipital (first spinal) nerve. A. bridge of bone sometimes converts this into a foramen. A similar, but much shallower, notch is present on the under surface; this, with the axis, forms an intervertebral foramen for the second nerve. The atlas and axis are peculiar in that the first and second spinal nerves issue behind the articular processes, whereas the remaining spinal nerves emerge in front of the articular facets of the vertebrae. Each lateral mass has, on its upper surface, an elongated, deeply concave articular fossa or cup. These articular cups converge anteriorly. Occasionally each presents two oval facets united by an isthmus.These cups receive the occipital condyles and permit nodding movements of the head. The inferior articular processes are circular and almost flat; they are directed downwards, with an inclination inwards, and rest upon the axis, and permit rotatory movements of the head. Between the upper and lower articular surfaces on the inside of the ring, two tubercles exist for the transverse ligament. This ligament divides the space within the ring into an anterior smaller segment for the odontoid process of the axis and a larger portion — the spinal foramen of other vertebra — for the spinal cord and its membranes.

The Axis is easily recognized by the large rounded odontoid process which surmounts its upper surface. The centrum has a more prominent lip than the other cervical vertebrae, and the anterior surface has a median ridge separating two lateral depressions. 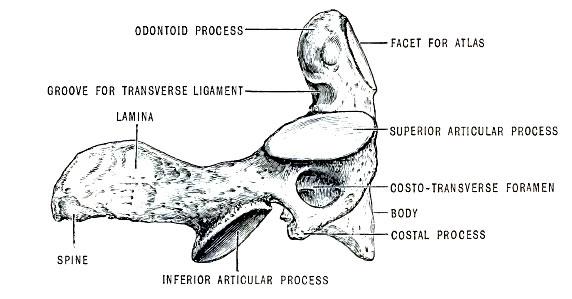 The odontoid process is an irregularly rounded peg of bone. The anterior surface has an oval facet for the anterior arch of the atlas. Posteriorly it presents a deep cut, smooth groove for the transverse ligament. To the apex a thin, narrow fibrous band (the suspensory ligament) is attached. On each side of the apex, there is an oblique facet for the check ligaments which connect it with the occipital bone. The pedicles are stout and broad; they support the oval, upwardly directed, articular surfaces for the atlas. The inferior articular surfaces do not differ from the cervical type. The transverse processes are smaller than the costal processes.
The spinous process is stout and strong, deeply concave on its under aspect, and affords firm attachment for muscles, especially those which help to rotate the head.