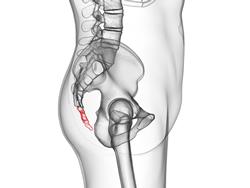 These bones of the coccyx (French: coccyx), when united together, which is usually the case in advanced life, are supposed to resemble a cuckoo's bill and are therefore called coccygeal. Most commonly there are four of them, sometimes but three; in a few instances five have been found. They diminish gradually in size from above downwards, which gives them, when taken together, a pyramidal form. As they are placed in a continuous line with the inferior third of the sacrum, they form a slightly concave surface anteriorly, a convex one posteriorly.

The first of these bones resembles, in some measure, the last false vertebra of the sacrum. Its body is small and concave at its upper aspect, which articulates with the extremity of the sacrum; posteriorly, two small processes termed cornua, project, which rest upon the sacral cornua.

The second bone of the coccyx is somewhat square, the third oblong, and the fourth is a small rounded nodule.

The margins (shoulders, as this part, has been named), of the first piece, in some cases, project upwards, and, joining with the sacrum, construct a fifth sacral foramen.

The third and fourth pieces of the coccyx, smaller than the second piece, are mere nodules of bone, corresponding solely to vertebral bodies.

The posterior surface of the coccyx is convex, and the upper three pieces afford attachment to the gluteus maximus on each side and the last piece to the coccygeal portion of the sphincter ani externus muscle.

The lateral margins are thin and receive parts of the sacrosciatic ligaments, of the coccygei muscles, and of the levator ani.

Attachments of muscles on the coccyx

The coccyx gives attachment to the gluteus maximus, and to the coccygeus of each side, and by its point to the sphincter ani. Its base articulates with the sacrum, and in advanced age becomes united to it.

Posterior view of the coccyx 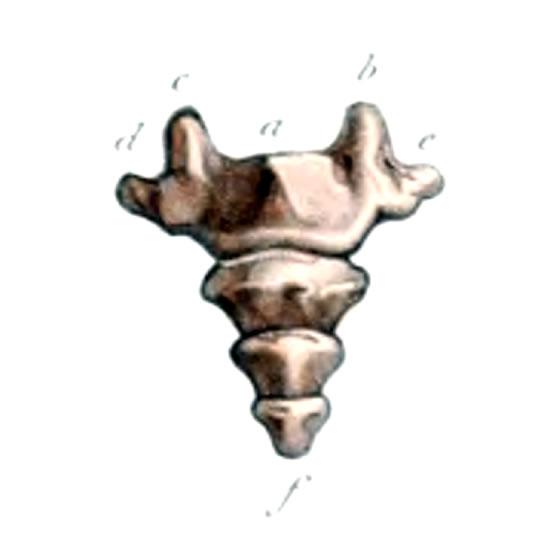