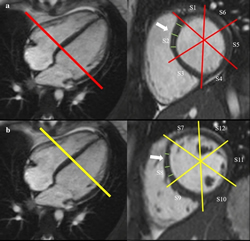 Pediatric patients are becoming increasingly referred for cardiovascular magnetic resonance (CMR). Measurement of ventricular wall thickness is typically part of the assessment and can be of diagnostic importance, e.g. in arterial hypertension.

CMR was performed in 161 healthy children and adolescents with an age range between 6 and 18 years from two centers in the UK and Germany as well as from a previously published CMR project of the German Competence Network for Congenital Heart Defects. LV myocardial thickness of 16 segments was measured on the short axis stack using the American Heart Association segmentation model. In addition, the thickness of the RV inferior and anterior free wall as well as biventricular mass was measured.

We established CMR normal values of segmental myocardial thickness and biventricular mass in children and adolescents. Our data are of use for the detection of abnormal myocardial properties and can serve as a reference in future studies and clinical practice.