Eukaryotic genomes are much more complex and larger in size than prokaryotic genomes. The human genome has three billion base pairs per haploid set of chromosomes, and 6 billion base pairs are replicated during the S phase of the cell cycle. There are multiple origins of replication on the eukaryotic chromosome; humans can have up to 100,000 origins of replication.

The rate of replication is approximately 100 nucleotides per second, much slower than prokaryotic replication.

In yeast, which is a eukaryote, special sequences known as Autonomously Replicating Sequences (ARS) are found on the chromosomes. These are equivalent to the origin of replication in E. coli.

The number of DNA polymerases in eukaryotes is much more than prokaryotes: 14 are known, of which five are known to have major roles during replication and have been well studied. They are known as pol α, pol β, pol γ, pol δ, and pol ε.

The essential steps of replication are the same as in prokaryotes. Before replication can start, the DNA has to be made available as template. Eukaryotic DNA is bound to basic proteins known as histones to form structures called nucleosomes. The chromatin (the complex between DNA and proteins) may undergo some chemical modifications, so that the DNA may be able to slide off the proteins or be accessible to the enzymes of the DNA replication machinery. At the origin of replication, a pre-replication complex is made with other initiator proteins. Other proteins are then recruited to start the replication process (Table 14.2).

A helicase using the energy from ATP hydrolysis opens up the DNA helix. Replication forks are formed at each replication origin as the DNA unwinds. The opening of the double helix causes over-winding, or supercoiling, in the DNA ahead of the replication fork. These are resolved with the action of topoisomerases. Primers are formed by the enzyme primase, and using the primer, DNA pol can start synthesis. While the leading strand is continuously synthesized by the enzyme pol δ, the lagging strand is synthesized by pol ε. A sliding clamp protein known as PCNA (Proliferating Cell Nuclear Antigen) holds the DNA pol in place so that it does not slide off the DNA. RNase H removes the RNA primer, which is then replaced with DNA nucleotides. The Okazaki fragments in the lagging strand are joined together after the replacement of the RNA primers with DNA. The gaps that remain are sealed by DNA ligase, which forms the phosphodiester bond.

Unlike prokaryotic chromosomes, eukaryotic chromosomes are linear. As you’ve learned, the enzyme DNA pol can add nucleotides only in the 5' to 3' direction. In the leading strand, synthesis continues until the end of the chromosome is reached. On the lagging strand, DNA is synthesized in short stretches, each of which is initiated by a separate primer. When the replication fork reaches the end of the linear chromosome, there is no place for a primer to be made for the DNA fragment to be copied at the end of the chromosome. These ends thus remain unpaired, and over time these ends may get progressively shorter as cells continue to divide.

The ends of the linear chromosomes are known as telomeres, which have repetitive sequences that code for no particular gene. In a way, these telomeres protect the genes from getting deleted as cells continue to divide. In humans, a six base pair sequence, TTAGGG, is repeated 100 to 1000 times. The discovery of the enzyme telomerase helped in the understanding of how chromosome ends are maintained. The telomerase enzyme contains a catalytic part and a built-in RNA template. It attaches to the end of the chromosome, and complementary bases to the RNA template are added on the 3' end of the DNA strand. Once the 3' end of the lagging strand template is sufficiently elongated, DNA polymerase can add the nucleotides complementary to the ends of the chromosomes. Thus, the ends of the chromosomes are replicated. 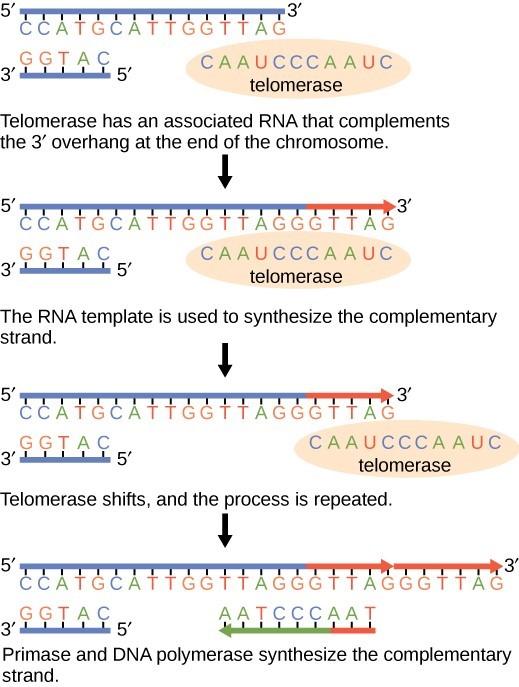 The ends of linear chromosomes are maintained by the action of the telomerase enzyme.

Telomerase is typically active in germ cells and adult stem cells. It is not active in adult somatic cells. For her discovery of telomerase and its action, Elizabeth Blackburn received the Nobel Prize for Medicine and Physiology in 2009. 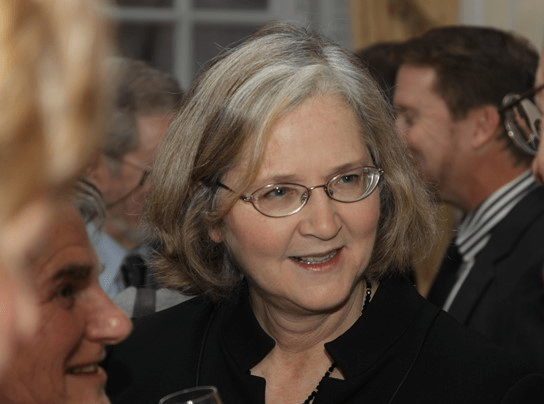 Elizabeth Blackburn, 2009 Nobel Laureate, is the scientist who discovered how telomerase works. (credit: US Embassy Sweden)

Cells that undergo cell division continue to have their telomeres shortened because most somatic cells do not make telomerase. This essentially means that telomere shortening is associated with aging. With the advent of modern medicine, preventative health care, and healthier lifestyles, the human life span has increased, and there is an increasing demand for people to look younger and have a better quality of life as they grow older. In 2010, scientists found that telomerase can reverse some age-related conditions in mice. This may have potential in

Cancer is characterized by uncontrolled cell division of abnormal cells. The cells accumulate mutations, proliferate uncontrollably, and can migrate to different parts of the body through a process called metastasis. Scientists have observed that cancerous cells have considerably shortened telomeres and that telomerase is active in these cells. Interestingly, only after the telomeres were shortened in the cancer cells did the telomerase become active. If the action of telomerase in these cells can be inhibited by drugs during cancer therapy, then the cancerous cells could potentially be stopped from further division.

Difference between Prokaryotic and Eukaryotic Replication