The currently accepted model of the structure of DNA was proposed in 1953 by Watson and Crick, who made their model after seeing a photograph of DNA that Franklin had taken using X-ray crystallography.

The photo showed the molecule’s double-helix shape and dimensions. The two strands that make up the double helix are complementary and anti-parallel in nature. That is, one strand runs in the 5' to 3' direction, whereas the complementary strand runs in the 3' to 5' direction. (The significance of directionality will be important when we explore how DNA copies itself.) DNA is a polymer of nucleotides that consists of deoxyribose sugar, a phosphate group, and one of four nitrogenous bases—A, T, C, and G—with a purine always pairing with a pyrimidine (as Chargaff found). The genetic “language” of DNA is found in sequences of the nucleotides. During cell division each daughter cell receives a copy of DNA in a process called replication. In the years since the discovery of the structure of DNA, many technologies, including DNA sequencing, have been developed that enable us to better understand DNA and its role in our genomes.

Each nucleotide is made up of a sugar, a phosphate group, and a nitrogenous base. The sugar is deoxyribose in DNA and ribose in RNA.

The nucleotides combine with each other by covalent bonds known as phosphodiester bonds or linkages. The purines have a double ring structure with a six-membered ring fused to a five-membered ring. Pyrimidines are smaller in size; they have a single six-membered ring structure. The carbon atoms of the five-carbon sugar are numbered 1', 2', 3', 4', and 5' (1' is read as “one prime”). The phosphate residue is attached to the hydroxyl group of the 5' carbon of one sugar of one nucleotide and the hydroxyl group of the 3' carbon of the sugar of the next nucleotide, thereby forming a 5'-3' phosphodiester bond.

In the 1950s, Francis Crick and James Watson worked together to determine the structure of DNA at the University of Cambridge, England. Other scientists like Linus Pauling and Maurice Wilkins were also actively exploring this field. Pauling had discovered the secondary structure of proteins using X-ray crystallography. In Wilkins’ lab, researcher Rosalind Franklin was using X-ray diffraction methods to understand the structure of DNA. Watson and Crick were able to piece together the puzzle of the DNA molecule on the basis of Franklin's data because Crick had also studied X-ray diffraction. In 1962, James Watson, Francis Crick, and Maurice Wilkins were awarded the Nobel Prize in Medicine. Unfortunately, by then Franklin had died, and Nobel prizes are not awarded posthumously. 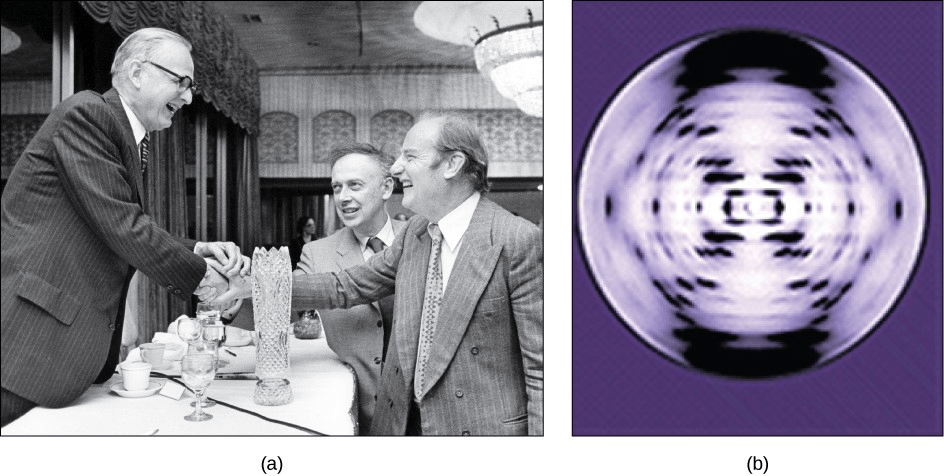 The work of pioneering scientists (a) James Watson, Francis Crick, and Maclyn McCarty led to our present day understanding of DNA. Scientist Rosalind Franklin discovered (b) the X-ray diffraction pattern of DNA, which helped to elucidate its double helix structure. (credit a: modification of work by Marjorie McCarty, Public Library of Science)

Watson and Crick proposed that DNA is made up of two strands that are twisted around each other to form a right-handed helix. Base pairing takes place between a purine and pyrimidine; namely, A pairs with T and G pairs with C. Adenine and thymine are complementary base pairs, and cytosine and guanine are also complementary base pairs. The base pairs are stabilized by hydrogen bonds; adenine and thymine form two hydrogen bonds and cytosine and guanine form three hydrogen bonds. The two strands are anti-parallel in nature; that is, the 3' end of one strand faces the 5' end of the other strand. The sugar and phosphate of the nucleotides form the backbone of the structure, whereas the nitrogenous bases are stacked inside. Each base pair is separated from the other base pair by a distance of 0.34 nm, and each turn of the helix measures 3.4 nm. Therefore, ten base pairs are present per turn of the helix. The diameter of the DNA double helix is 2 nm, and it is uniform throughout. Only the pairing between a purine and pyrimidine can explain the uniform diameter. The twisting of the two strands around each other results in the formation of uniformly spaced major and minor grooves. 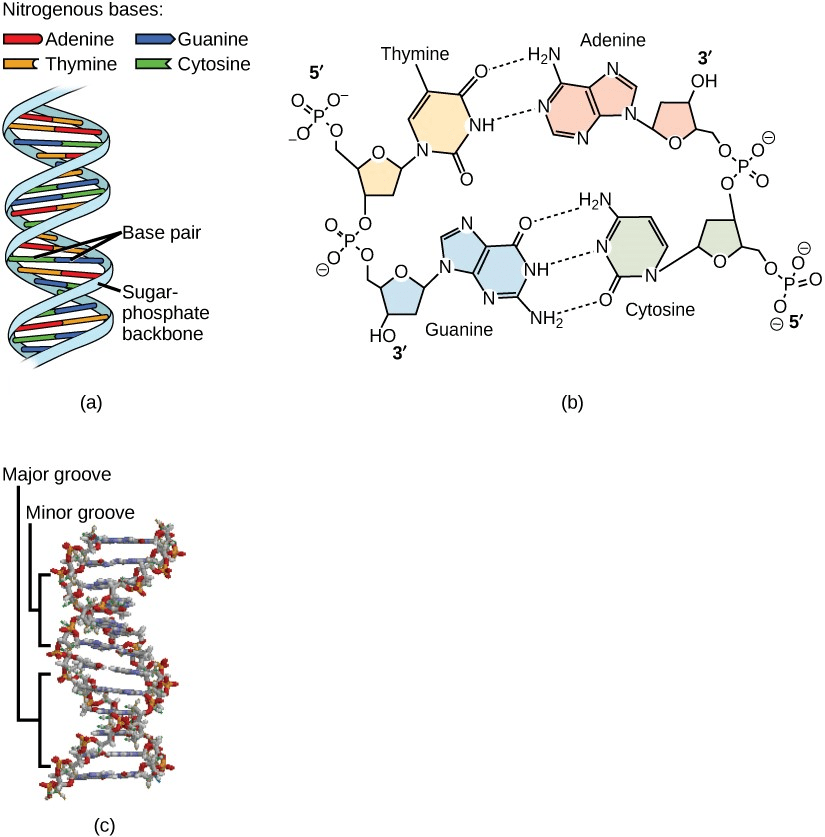 DNA has (a) a double helix structure and (b) phosphodiester bonds. The (c) major and minor grooves are binding sites for DNA binding proteins during processes such as transcription (the copying of RNA from DNA) and replication.

Until the 1990s, the sequencing of DNA (reading the sequence of DNA) was a relatively expensive and long process. Using radiolabeled nucleotides also compounded the problem through safety concerns. With currently available technology and automated machines, the process is cheap, safer, and can be completed in a matter of hours. Fred Sanger developed the sequencing method used for the human genome sequencing project, which is widely used today.

In Frederick Sanger's dideoxy chain termination method, dye-labeled dideoxynucleotides are used to generate DNA fragments that terminate at different points. The DNA is separated by capillary electrophoresis on the basis of size, and from the order of fragments formed, the DNA sequence can be read. The DNA sequence readout is shown on an electropherogram that is generated by a laser scanner.

The DNA sample to be sequenced is denatured or separated into two strands by heating it to high temperatures. The DNA is divided into four tubes in which a primer, DNA polymerase, and all four nucleotides (A, T, G, and C) are added. In addition to each of the four tubes, limited quantities of one of the four dideoxynucleotides are added to each tube respectively. The tubes are labeled as A, T, G, and C according to the ddNTP added. For detection purposes, each of the four dideoxynucleotides carries a different fluorescent label. Chain elongation continues until a fluorescent dideoxy nucleotide is incorporated, after which no further elongation takes place. After the reaction is over, electrophoresis is performed. Even a difference in length of a single base can be detected. The sequence is read from a laser scanner. For his work on DNA sequencing, Sanger received a Nobel Prize in chemistry in 1980.

Gel electrophoresis is a technique used to separate DNA fragments of different sizes. Usually the gel is made of a chemical called agarose. Agarose powder is added to a buffer and heated. After cooling, the gel solution is poured into a casting tray. Once the gel has solidified, the DNA is loaded on the gel and electric current is applied. The DNA has a net negative charge and moves from the negative electrode toward the positive electrode. The electric current is applied for sufficient time to let the DNA separate according to size; the smallest fragments will be farthest from the well (where the DNA was loaded), and the heavier molecular weight fragments will be closest to the well. Once the DNA is separated, the gel is stained with a DNA-specific dye for viewing it.

Neanderthal Genome: How Are We Related?

in 2010. Neanderthals are the closest ancestors of present-day humans. They were known to have lived in Europe and Western Asia before they disappeared from fossil records approximately 30,000 years ago. Green’s team studied almost 40,000-year-old fossil remains that were selected from sites across the world. Extremely sophisticated means of sample preparation and DNA sequencing were employed because of the fragile nature of the bones and heavy microbial contamination. In their study, the scientists were able to sequence some four billion base pairs. The Neanderthal sequence was compared with that of present-day humans from across the world. After comparing the sequences, the researchers found that the Neanderthal genome had 2 to 3 percent greater similarity to people living outside Africa than to people in Africa. While current theories have suggested that all present-day humans can be traced to a small ancestral population in Africa, the data from the Neanderthal genome may contradict this view. Green and his colleagues also discovered DNA segments among people in Europe and Asia that are more similar to Neanderthal sequences than to other contemporary human sequences. Another interesting observation was that Neanderthals are as closely related to people from Papua New Guinea as to those from China or France. This is surprising because Neanderthal fossil remains have been located only in Europe and West Asia. Most likely, genetic exchange took place between Neanderthals and modern humans as modern humans emerged out of Africa, before the divergence of Europeans, East Asians, and Papua New Guineans.

Several genes seem to have undergone changes from Neanderthals during the evolution of presentday humans. These genes are involved in cranial structure, metabolism, skin morphology, and cognitive development. One of the genes that is of particular interest is RUNX2, which is different in modern day humans and Neanderthals. This gene is responsible for the prominent frontal bone, bell-shaped rib cage, and dental differences seen in Neanderthals. It is speculated that an evolutionary change in RUNX2 was important in the origin of modern-day humans, and this affected the cranium and the upper body.

When comparing prokaryotic cells to eukaryotic cells, prokaryotes are much simpler than eukaryotes in many of their features. Most prokaryotes contain a single, circular chromosome that is found in an area of the cytoplasm called the nucleoid. 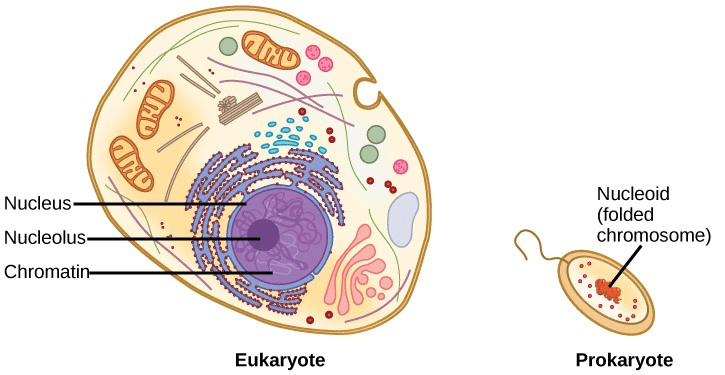 A eukaryote contains a well-defined nucleus, whereas in prokaryotes, the chromosome lies in the cytoplasm in an area called the nucleoid.

The size of the genome in one of the most well-studied prokaryotes, E.coli, is 4.6 million base pairs (approximately 1.1 mm, if cut and stretched out). So how does this fit inside a small bacterial cell? The DNA is twisted by what is known as supercoiling. Supercoiling means that DNA is either under-wound (less than one turn of the helix per 10 base pairs) or over-wound (more than 1 turn per 10 base pairs) from its normal relaxed state. Some proteins are known to be involved in the supercoiling; other proteins and enzymes such as DNA gyrase help in maintaining the supercoiled structure.

Eukaryotes, whose chromosomes each consist of a linear DNA molecule, employ a different type of packing strategy to fit their DNA inside the nucleus. At the most basic level, DNA is wrapped around proteins known as histones to form structures called nucleosomes. The histones are evolutionarily conserved proteins that are rich in basic amino acids and form an octamer. The DNA (which is negatively charged because of the phosphate groups) is wrapped tightly around the histone core. This nucleosome is linked to the next one with the help of a linker DNA. This is also known as the “beads on a string” structure. This is further compacted into a 30 nm fiber, which is the diameter of the structure. At the metaphase stage, the chromosomes are at their most compact, are approximately 700 nm in width, and are found in association with scaffold proteins.

In interphase, eukaryotic chromosomes have two distinct regions that can be distinguished by staining. The tightly packaged region is known as heterochromatin, and the less dense region is known as euchromatin. Heterochromatin usually contains genes that are not expressed, and is found in the regions of the centromere and telomeres. The euchromatin usually contains genes that are transcribed, with DNA packaged around nucleosomes but not further compacted. 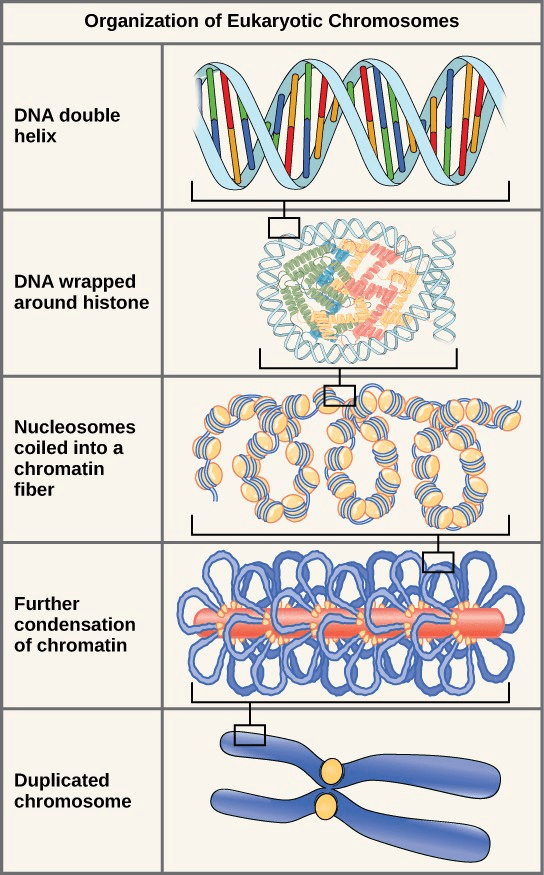 These figures illustrate the compaction of the eukaryotic chromosome.