Development of the Male and Female Reproductive Systems 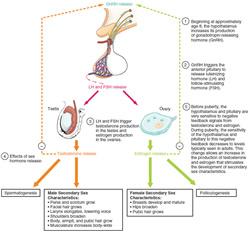 Development of the Sexual Organs in the Embryo and Fetus

Females are considered the “fundamental” sex—that is, without much chemical prompting, all fertilized eggs would develop into females. To become a male, an individual must be exposed to the cascade of factors initiated by a single gene on the male Y chromosome. This is called the SRY (Sex-determining Region of the Y chromosome). Because females do not have a Y chromosome, they do not have the SRY gene. Without a functional SRY gene, an individual will be female.

In both male and female embryos, the same group of cells has the potential to develop into either the male or female gonads; this tissue is considered bipotential. The SRY gene actively recruits other genes that begin to develop the testes, and suppresses genes that are important in female development. As part of this SRY-prompted cascade, germ cells in the bipotential gonads differentiate into spermatogonia. Without SRY, different genes are expressed, oogonia form, and primordial follicles develop in the primitive ovary.

Soon after the formation of the testis, the Leydig cells begin to secrete testosterone. Testosterone can influence tissues that are bipotential to become male reproductive structures. For example, with exposure to testosterone, cells that could become either the glans penis or the glans clitoris form the glans penis. Without testosterone, these same cells differentiate into the clitoris.

Not all tissues in the reproductive tract are bipotential. The internal reproductive structures (for example the uterus, uterine tubes, and part of the vagina in females; and the epididymis, ductus deferens, and seminal vesicles in males) form from one of two rudimentary duct systems in the embryo. For proper reproductive function in the adult, one set of these ducts must develop properly, and the other must degrade. In males, secretions from sustentacular cells trigger a degradation of the female duct, called the Müllerian duct. At the same time, testosterone secretion stimulates growth of the male tract, the Wolffian duct. Without such sustentacular cell secretion, the Müllerian duct will develop; without testosterone, the Wolffian duct will degrade. Thus, the developing offspring will be female. For more information and a figure of differentiation of the gonads, seek additional content on fetal development.

A baby’s gender is determined at conception, and the different genitalia of male and female fetuses develop from the same tissues in the embryo.

Puberty is the stage of development at which individuals become sexually mature. Though the outcomes of puberty for boys and girls are very different, the hormonal control of the process is very similar. In addition, though the timing of these events varies between individuals, the sequence of changes that occur is predictable for male and female adolescents. As shown in the figure below, a concerted release of hormones from the hypothalamus (GnRH), the anterior pituitary (LH and FSH), and the gonads (either testosterone or estrogen) is responsible for the maturation of the reproductive systems and the development of secondary sex characteristics, which are physical changes that serve auxiliary roles in reproduction.

The first changes begin around the age of eight or nine when the production of LH becomes detectable. The release of LH occurs primarily at night during sleep and precedes the physical changes of puberty by several years. In pre-pubertal children, the sensitivity of the negative feedback system in the hypothalamus and pituitary is very high. This means that very low concentrations of androgens or estrogens will negatively feed back onto the hypothalamus and pituitary, keeping the production of GnRH, LH, and FSH low.

As an individual approaches puberty, two changes in sensitivity occur. The first is a decrease of sensitivity in the hypothalamus and pituitary to negative feedback, meaning that it takes increasingly larger concentrations of sex steroid hormones to stop the production of LH and FSH. The second change in sensitivity is an increase in sensitivity of the gonads to the FSH and LH signals, meaning the gonads of adults are more responsive to gonadotropins than are the gonads of children. As a result of these two changes, the levels of LH and FSH slowly increase and lead to the enlargement and maturation of the gonads, which in turn leads to secretion of higher levels of sex hormones and the initiation of spermatogenesis and folliculogenesis.

In addition to age, multiple factors can affect the age of onset of puberty, including genetics, environment, and psychological stress. One of the more important influences may be nutrition; historical data demonstrate the effect of better and more consistent nutrition on the age of menarche in girls in the United States, which decreased from an average age of approximately 17 years of age in 1860 to the current age of approximately 12.75 years in 1960, as it remains today. Some studies indicate a link between puberty onset and the amount of stored fat in an individual. This effect is more pronounced in girls, but has been documented in both sexes. Body fat, corresponding with secretion of the hormone leptin by adipose cells, appears to have a strong role in determining menarche. This may reflect to some extent the high metabolic costs of gestation and lactation. In girls who are lean and highly active, such as gymnasts, there is often a delay in the onset of puberty. 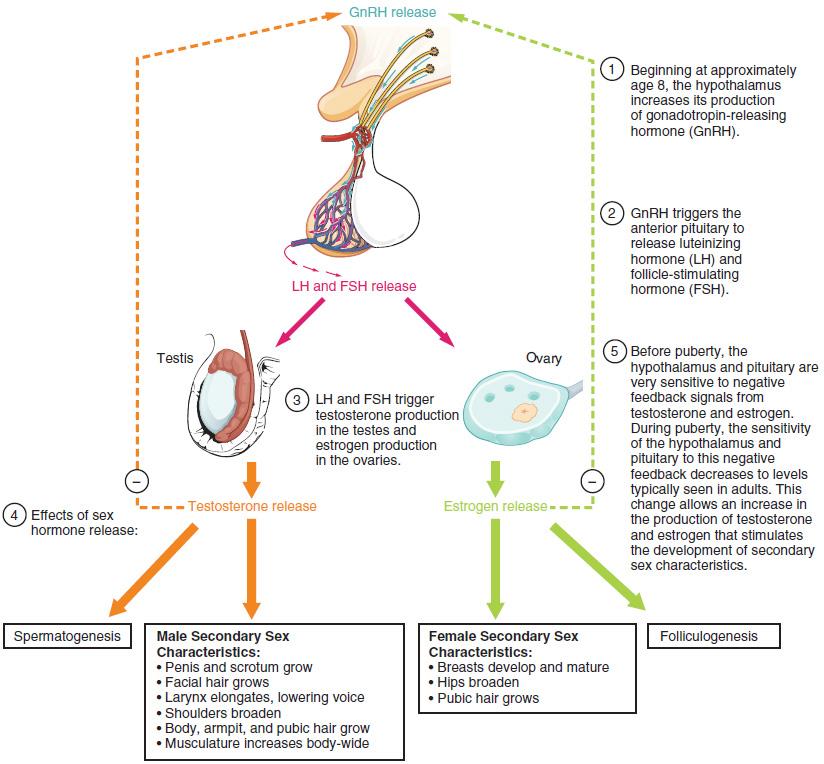 Hormones of Puberty During puberty, the release of LH and FSH from the anterior pituitary stimulates the gonads to produce sex hormones in both male and female adolescents.

Development of the Secondary Sexual Characteristics

As a girl reaches puberty, typically the first change that is visible is the development of the breast tissue. This is followed by the growth of axillary and pubic hair. A growth spurt normally starts at approximately age 9 to 11, and may last two years or more. During this time, a girl’s height can increase 3 inches a year. The next step in puberty is menarche, the start of menstruation.

In boys, the growth of the testes is typically the first physical sign of the beginning of puberty, which is followed by growth and pigmentation of the scrotum and growth of the penis. The next step is the growth of hair, including armpit, pubic, chest, and facial hair. Testosterone stimulates the growth of the larynx and thickening and lengthening of the vocal folds, which causes the voice to drop in pitch. The first fertile ejaculations typically appear at approximately 15 years of age, but this age can vary widely across individual boys. Unlike the early growth spurt observed in females, the male growth spurt occurs toward the end of puberty, at approximately age 11 to 13, and a boy’s height can increase as much as 4 inches a year. In some males, pubertal development can continue through the early 20s.