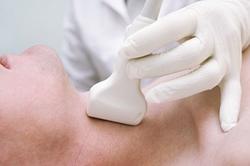 The relationship between SUA and thyroid function in patients with DKD is still uncertain. In current study, we aimed to investigate the association between thyroid stimulating hormone (TSH) and SUA in type 2 diabetic patients with early-stage DKD.

Compared with normal SUA group and control group, high SUA group exhibited the increased SUA level, and the decreased TSH level (P < 0.017 for all), and no significant difference was detected in SUA and TSH between normal SUA group and control group. TSH was negatively associated with SUA (r = − 0.35, P < 0.001) in type 2 diabetic participants with early-stage DKD. Furthermore, the decreased TSH level was independently correlated with higher SUA level (β = − 25.69, P < 0.001), and retained a significant association with hyperuricemia (odds ratio = 1.73, P = 0.002) after adjusting for confounding factors in type 2 diabetic patients with early-stage DKD.