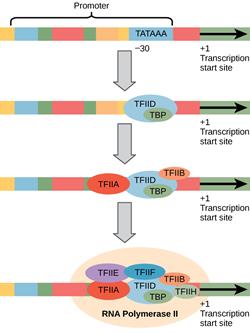 Prokaryotes and eukaryotes perform fundamentally the same process of transcription, with a few key differences.

The most important difference between prokaryotes and eukaryotes is the latter’s membrane-bound nucleus and organelles. With the genes bound in a nucleus, the eukaryotic cell must be able to transport its mRNA to the cytoplasm and must protect its mRNA from degrading before it is translated. Eukaryotes also employ three different polymerases that each transcribe a different subset of genes. Eukaryotic mRNAs are usually monogenic, meaning that they specify a single protein.

Initiation of Transcription in Eukaryotes

Unlike the prokaryotic polymerase that can bind to a DNA template on its own, eukaryotes require several other proteins, called transcription factors, to first bind to the promoter region and then help recruit the appropriate polymerase.

The features of eukaryotic mRNA synthesis are markedly more complex those of prokaryotes. Instead of a single polymerase comprising five subunits, the eukaryotes have three polymerases that are each made up of 10 subunits or more. Each eukaryotic polymerase also requires a distinct set of transcription factors to bring it to the DNA template.

RNA polymerase I is located in the nucleolus, a specialized nuclear substructure in which ribosomal RNA (rRNA) is transcribed, processed, and assembled into ribosomes (Table 15.1). The rRNA molecules are considered structural RNAs because they have a cellular role but are not translated into protein. The rRNAs are components of the ribosome and are essential to the process of translation. RNA polymerase I synthesizes all of the rRNAs except for the 5S rRNA molecule. The “S” designation applies to “Svedberg” units, a nonadditive value that characterizes the speed at which a particle sediments during centrifugation.

Locations, Products, and Sensitivities of the Three Eukaryotic RNA Polymerases

RNA polymerase II is located in the nucleus and synthesizes all protein-coding nuclear pre-mRNAs. Eukaryotic premRNAs undergo extensive processing after transcription but before translation. For clarity, this module’s discussion of transcription and translation in eukaryotes will use the term “mRNAs” to describe only the mature, processed molecules that are ready to be translated. RNA polymerase II is responsible for transcribing the overwhelming majority of eukaryotic genes.

RNA polymerase III is also located in the nucleus. This polymerase transcribes a variety of structural RNAs that includes the 5S pre-rRNA, transfer pre-RNAs (pre-tRNAs), and small nuclear pre- RNAs. The tRNAs have a critical role in translation; they serve as the adaptor molecules between the mRNA template and the growing polypeptide chain. Small nuclear RNAs have a variety of functions, including “splicing” pre-mRNAs and regulating transcription factors.

Eukaryotic promoters are much larger and more complex than prokaryotic promoters, but both have a TATA box. For example, in the mouse thymidine kinase gene, the TATA box is located at approximately -30 relative to the initiation (+1) site. For this gene, the exact TATA box sequence is TATAAAA, as read in the 5' to 3' direction on the nontemplate strand. This sequence is not identical to the E. coli TATA box, but it conserves the A–T rich element. The thermostability of A–T bonds is low and this helps the DNA template to locally unwind in preparation for transcription. 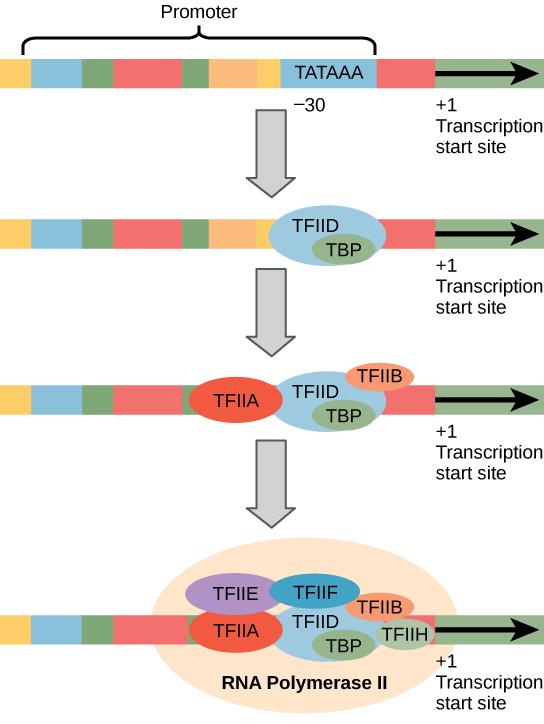 The mouse genome includes one gene and two pseudogenes for cytoplasmic thymidine kinase. Pseudogenes are genes that have lost their protein-coding ability or are no longer expressed by the cell. These pseudogenes are copied from mRNA and incorporated into the chromosome. For example, the mouse thymidine kinase promoter also has a conserved CAAT box (GGCCAATCT) at approximately -80. This sequence is essential and is involved in binding transcription factors. Further upstream of the TATA box, eukaryotic promoters may also contain one or more GC-rich boxes (GGCG) or octamer boxes (ATTTGCAT). These elements bind cellular factors that increase the efficiency of transcription initiation and are often identified in more “active” genes that are constantly being expressed by the cell.

The processes of bringing RNA polymerases I and III to the DNA template involve slightly less complex collections of transcription factors, but the general theme is the same. Eukaryotic transcription is a tightly regulated process that requires a variety of proteins to interact with each other and with the DNA strand. Although the process of transcription in eukaryotes involves a greater metabolic investment than in prokaryotes, it ensures that the cell transcribes precisely the pre-mRNAs that it needs for protein synthesis

During human embryonic development, a transcription factor encoded by the SRY gene starts a chain of events, causing the embryo to develop male sex characteristics. This gene is on the Y chromosome in humans and many other mammals. A deletion or mutation of the SRY gene can cause the human embryo to not develop into a male even though the individual has an XY genotype, a condition called Swyer syndrome. 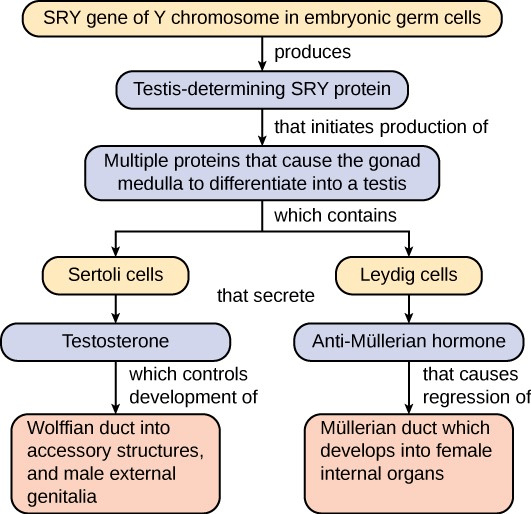 The SYR gene of the Y chromosome produces proteins that lead to the expression of primary sex characteristics, as shown.