RNA is transcribed, but must be processed into a mature form before translation can begin.

In eukaryotic cells, the RNA transcript often contains regions, called introns, that are removed prior to translation. The regions of RNA that code for protein are called exons. After an RNA molecule has been transcribed, but prior to its departure from the nucleus to be translated, the RNA is processed and the introns are removed by splicing. Splicing is done by spliceosomes, ribonucleoprotein complexes that can recognize the two ends of the intron, cut the transcript at those two points, and bring the exons together for ligation.

Pre-mRNA can be alternatively spliced to create different proteins.

In the 1970s, genes were first observed that exhibited alternative RNA splicing. Alternative RNA splicing is a mechanism that allows different protein products to be produced from one gene when different combinations of exons are combined to form the mRNA. This alternative splicing can be haphazard, but more often it is controlled and acts as a mechanism of gene regulation, with the frequency of different splicing alternatives controlled by the cell as a way to control the production of different protein products in different cells or at different stages of development. Alternative splicing is now understood to be a common mechanism of gene regulation in eukaryotes; according to one estimate, 70 percent of genes in humans are expressed as multiple proteins through alternative splicing. Although there are multiple ways to alternatively splice RNA transcripts, the original 5'-3' order of the exons is always conserved. That is, a transcript with exons 1 2 3 4 5 6 7 might be spliced 1 2 4 5 6 7 or 1 2 3 6 7, but never 1 2 5 4 3 6 7. 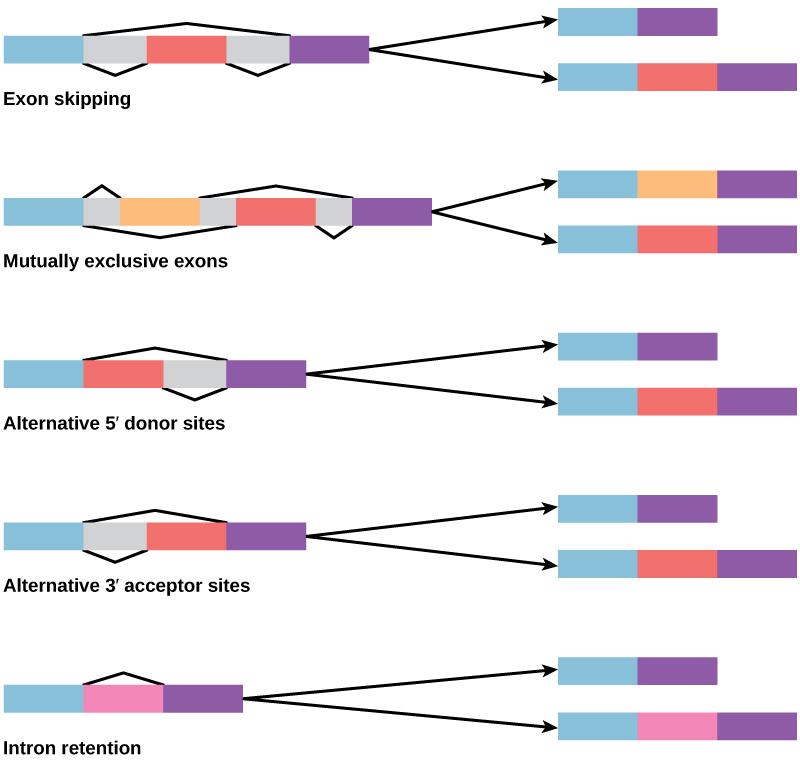 There are five basic modes of alternative splicing.

How could alternative splicing evolve? Introns have a beginning- and ending-recognition sequence; it is easy to imagine the failure of the splicing mechanism to identify the end of an intron and instead find the end of the next intron, thus removing two introns and the intervening exon. In fact, there are mechanisms in place to prevent such intron skipping, but mutations are likely to lead to their failure. Such “mistakes” would more than likely produce a nonfunctional protein. Indeed, the cause of many genetic diseases is abnormal splicing rather than mutations in a coding sequence. However, alternative splicing could possibly create a protein variant without the loss of the original protein, opening up possibilities for adaptation of the new variant to new functions. Gene duplication has played an important role in the evolution of new functions in a similar way by providing genes that may evolve without eliminating the original, functional protein.

Question: In the corn snake Pantherophis guttatus, there are several different color variants, including amelanistic snakes whose skin patterns display only red and yellow pigments. The cause of amelanism in these snakes was recently identified as the insertion of a transposable element into an intron in the OCA2 (oculocutaneous albinism) gene. How might the insertion of extra genetic material into an intron lead to a nonfunctional protein?

Visualize how mRNA splicing happens by watching the process in action in this video.

Before the mRNA leaves the nucleus, it is given two protective "caps" that prevent the ends of the strand from degrading during its journey. 5' and 3' exonucleases can degrade unprotected RNAs. The 5' cap, which is placed on the 5' end of the mRNA, is usually composed of a methylated guanosine triphosphate molecule (GTP). The GTP is placed "backward" on the 5' end of the mRNA, so that the 5' carbons of the GTP and the terminal nucleotide are linked through three phosphates. The poly-A tail, which is attached to the 3' end, is usually composed of a long chain of adenine nucleotides. These changes protect the two ends of the RNA from exonuclease attack.

Binding of proteins to the RNA can also influence its stability. Proteins called RNA-binding proteins, or RBPs, can bind to the regions of the mRNA just upstream or downstream of the protein-coding region. These regions in the RNA that are not translated into protein are called the untranslated regions, or UTRs. They are not introns (those have been removed in the nucleus). Rather, these are regions that regulate mRNA localization, stability, and protein translation. The region just before the protein-coding region is called the 5' UTR, whereas the region after the coding region is called the 3' UTR. The binding of RBPs to these regions can increase or decrease the stability of an RNA molecule, depending on the specific RBP that binds.

In addition to RBPs that bind to and control (increase or decrease) RNA stability, other elements called microRNAs can bind to the RNA molecule. These microRNAs, or miRNAs, are short RNA molecules that are only 21 to 24 nucleotides in length. The miRNAs are made in the nucleus as longer pre-miRNAs. These pre-miRNAs are chopped into mature miRNAs by a protein called Dicer. Like transcription factors and RBPs, mature miRNAs recognize a specific sequence and bind to the RNA; however, miRNAs also associate with a ribonucleoprotein complex called the RNA-induced silencing complex (RISC). The RNA component of the RISC base-pairs with complementary sequences on an mRNA and either impede translation of the message or lead to the degradation of the mRNA.