The typical cell of cartilage is round or oval in shape, rich in cytoplasm, and possesses one (rarely two) nucleus of oval form and vesicular and reticulated structure. Within the cytoplasm there are frequently one or more clear spots, which are drops of homogeneous fluid, "vacuoles." 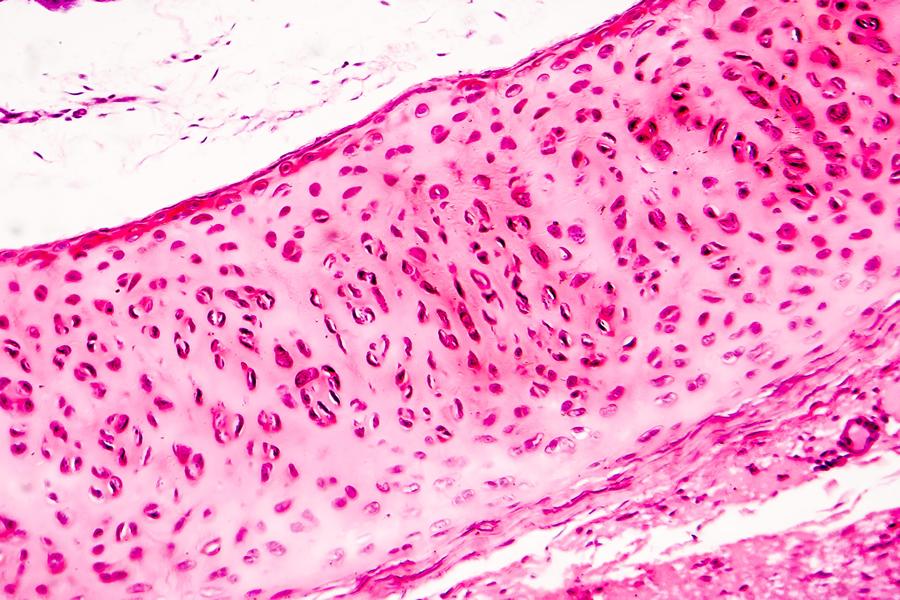 The intercellular substance is abundant in amount and has received the special designation "matrix". According to the character of this matrix, the cartilages have been divided into three varieties : hyaline cartilage, fibro-cartilage, and elastic cartilage. In hyaline cartilage the matrix is clear and homogeneous and has the consistency of gristle. In fibro-cartilage it is traversed by or nearly wholly composed of delicate fibres similar to those of white fibrous tissue, which will be described presently. In elastic cartilage the matrix contains coarse, branching, and anastomosing fibres similar to those of elastic fibrous tissue (vide infra).

The arrangement of the cells and intercellular substances varies considerably. Sometimes the cells are pretty uniformly distributed throughout the intercellular substance. Sometimes they are arranged in groups of from two to four or even six cells. Toward the surface of a piece of cartilage the cells are apt to be smaller than those nearer the centre, and are frequently flattened. Here, also, they often lose the characters that distinguish them in the body of the tissue, and more and more closely resemble the cells of the fibrous tissue surrounding the cartilage. This fibrous tissue is called the "perichondrium" and is usually not sharply defined from the cartilage itself, the matrix of the latter becoming more and more fibrous in character and the cells less distinctly like those typical of cartilage until the distinction between the two tissues is lost. The perichondrium is wanting over the free surfaces of the articular cartilages.

Although under ordinary powers of the microscope and in specimens which have not been specially prepared the matrix of hyaline cartilage appears clear and .almost, if not quite, homogeneous, closer study reveals the presence of a fine network within the clear intercellular substance. This network is thought to be a system of minute channels through which the nutrient fluids permeate the tissue and reach its cells. It may be, however, that this reticulum is of fibrous character^ in which case the fibres might be more pervious than the surrounding matrix, and bear the same relations to the nutrition of the tissue as a system of minute channels. In sections stained with hsematoxylin the matrix of hyaline cartilage often acquires a faint bluish tinge, the cytoplasm of the cells a deeper shade of the same color^ and the nuclear chromatin a very dark blue. Hyaline cartilage forms the costal cartilages, the thyroid cartilage, the ensiform process of the sternum, the cartilages of the trachea and bronchi, and the temporary cartilages which are subsequently replaced by bone.

This variety of cartilage is found in only a few situations : in the interarticular cartilages of joints, in some of the synchondroses, in one region in the heart, and in the intervertebral disks. In the latter situapossess branching processes, extending for some distance between the fibres of the intercellular substance, and giving the whole tissue a character closely resembling that of white fibrous tissue. The cells are, however, more cytoplasmic than those of ordinary fibrous tissue.

This form of cartilage is found in the epiglottis, the cornicula of the larynx, the ear, and the Eustachian tube. The coarseness of the anastomosing fibrous network of the matrix varies in different situations and in different parts of the same piece of cartilage. The reticulum is usually more open and composed of larger fibres toward the centre of the tissue than at the periphery, where it becomes more delicate and finally blends with the fibrous intercellular substance of the perichondrium. It is evident, both from the structure of the cartilages and from the situations in which they are found, that they constitute elastic tissues suitable for diminishing the effects of mechanical shock. This is obviously the case in the joints, where both the hyaline and the fibrous varieties are found. Their elasticity and moderately firm consistency are also of obvious utility in the larynx and other air-passages and in the ear, nose, and synchondroses.