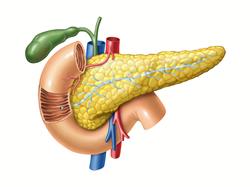 The pancreas is an exocrine and endocrine gland.

The surface is irregular, thoughr at the palpation, friable, pink coloured.

Transversely lengthen with the front of the vertebral column on an oblic crânial and left side direction.
It is in contact with the lumbar column, therefore particularly exposed with the abdominal traumatisms :

The head of the pancreas

Coarse form of quadrilateral.
In contact with the duodenum. This pancreas rests on the third duodenum while being prolonged by a small strip, the process incinatus (or small pancreas).

This last is crossed by the vessels mesenteric.

On a sagittal cut, one can see that the pancreas goes up on the first duodenum by the tuber retro duodénal (or omental, bus continues with small the omentum).

It is a narrowed portion of the pancreas, with depends on its caudal edge which presents a true notch.

Thickness: 2 cm it is a very flattened gland.

The duodenum and the pancreas by its head are indissociable as much on the anatomical level that pathological, because of 4 elements:

There are two pancreatic ways:

Drain only the head of the pancreas and throws itself directly in the internal edge of the duodenum by a projection: the major papilla duodénale (or minor duodenal papilla).