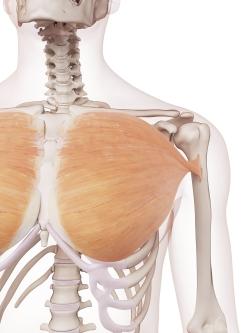 The pectoralis major (french : muscle grand pectoral) named from its being the larger of the two muscles which arise from the front of the chest (pectus = breast) - is a thick, triangular, fan-shaped sheet ; or, more accurately, it may be likened to the sector of a circle on account of le curved origin, from which all the fibres converge to the upper part of the humerus as a center.

The clavicular portion is distinct from the rest, and might be described as a separate muscle. It forms a thick band of parallel fibers, which, arising tendinous from the clavicle, become almost immediately fleshy, and are inserted into the humerus by short tendinous fibers in front of the rest of the tendon of insertion.

The rest of the muscle (the sterno-costal portion as it is usually named) consist of fleshy fibers which, arising directly from the four points of origin already enumerated, converge and cross one another to be inserted into the humerus behind the clavicular portion by means of a peculiar tendon.

In a vertical section near the humerus this tendon is seen to be folded upon itself into a compressed horseshoe-shape. The convexity of the folded tender! is directed downwards, and the anterior segment of the horseshoe is shorter than the posterior.

The anterior segment receives the muscular fibers which proceed from that part of the origin of the sterno-costal portion which lies above the third costa cartilage, and with the front of this segment the insertion of the clavicular portion is closely blended. The posterior segment receives the fibers from the lower part of the sterno-costal portion, the lowest fibers (viz. those from the external oblique aponeurosis) being inserted highest, and the highest (viz. those from the middle of the sternum) being attached to the lower part of the horseshoe, where they become continuous with those forming the anterior segment of the tendon.

In consequence of this arrangement the lower fibers of the muscle disappear from view soon after their origin, and are concealed by the clavicular and upper sterno-costal fibers. This arrangement gives to the anterior border of the axilla a concave outline. Were it not for this decussation, the muscle would be broad and thinner, and would cause an inconvenient and unsightly projection in front of the axilla.

The sterno-costal portion may usually be divided into a superficial and deep plane, the superficial being composed of the sternal and external oblique origin ; the deep, of the fibers which spring from the ribs and their cartilages.

From all the nerves of the brachial plexus :

To adduct; flex, and rotate inwards the upper arm. By its clavicular portion it will draw the arm more directly forwards, as in round-hand bowline while the sterno-costal portion will draw the arm more downwards than forwards The whole muscle will be used with great force in striking a blow downwards and forwards. When the arm hangs close to the side, the pectoralis major will draw the scapula forwards and downwards, so as to advance and depress the point oi the shoulder, as may be seen in a person shivering with cold. When the arm is elevated and fixed, this muscle will draw^the front of the chest up to it, as b. climbing. It will also raise the upper ribs in forced inspiration.

Beneath, lie the subclavius, pectoralis minor, and serratus magnus, the fascia hovering the external and internal intercostal muscles, the coracoid process, and costo-coracoid membrane, with the structures which pass through the membrane, viz. the cephalic vein, acromio-thoracic vessels, and the external anterior thoracic nerve. Further outwards it forms part of the anterior wall of the axilla, and enters into relation with the axillary vessels and nerves.

The upper border is separated from the deltoid by the cephalic vein and the humeral branch of the acromio-thoracic artery.

The clavicular and sterno-costal portions are often widely separated, they may also be further subdivided into separate bands or sheets, and they may be wholly or partly absent. Occasionally, the muscles of the two sides join across the sternum, or muscular bands may join the sternal ends of the clavicle. Bands may cross Tom the axillary border to the latissimus dorsi or the deep fascia of the upper arm ; deeper bands may also pass to the insertion of the pectoralis minor, or the capsule of the shoulder joint.

Muscles of the antero-lateral region of the thorax