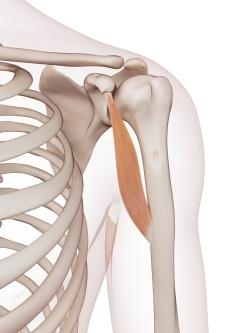 The coracobrachialis muscle (French: muscle coraco-brachial) - named from its attachment to the coracoid process and he upper arm braclhium - is a cylindrical muscle, but somewhat fusiform at the extremities.

The rough impression two or three inches long upon the inner )order of the humerus in its middle third, and in front of the internal intermuscular septum;
the internal intermuscular septum and an aponeurotic band which extends upwards from the septum in front of the tendons of the teres major and the latissimus dorsi to the lesser tuberosity of the humerus.

It arises from the coracoid process by a short tendon, which blended upon its inner side with the insertion of the pectoralis minor, and from he short head of the biceps by fleshy fibres for three or four inches below the coracoid process. From this origin the fibres run parallel to one another, and are nserted by a short tendon. The muscle is frequently divided into two planes between vhich the external cutaneous nerve passes.

From the outer cord of the brachial plexus (through the leventh cervical nerve) by the external cutaneous branch, which either pierces it ibout the middle upon its way to the biceps and brachialis anticus, or sends a )ranch to it in this position, while the rest of the nerve passes in front of the muscle.

To adduct and flex the humerus. As it lies at so small an angle with he axis of that bone, it assists materially in pressing the head of the humerus against the glenoid cavity, and so helps to prevent dislocation.

Superficially, the deltoid muscle and the pectoralis major muscle ; deeply, the sub-scapularis, latissimus dorsi, teres major and triceps. Upon its outer side lies the short head of the biceps ; upon its inner side the pectoralis minor, the axillary and brachial vessels, with the median nerve and other branches of the brachial plexus.

The coraco-brachialis varies chiefly in its insertion, which may extend as high as the capsule of the shoulder or the lesser tuberosity, occasionally forming in this position a separate muscle (the rotator humeri) ; or it may descend as low as the inner condyle. It sometimes sends a slip to the triceps or brachialis (brachialis anticus).

Muscles of the arm