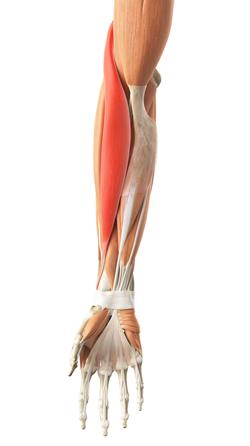 The brachio-radialis, or supinator radii longus - named from its attachment to the humerus and radius and sometimes called the supinator longus from an erroneous view of its action - is a fusiform sheet.

The base of the styloid process of the radius.

Arising by fleshy fibres from the septum and by short tendinous fibres from the condylar ridge, the muscle passes downwards and forwards in penni-form fashion to its tendon which lies first on its deep surface. Becoming free just below the middle of the forearm, the tendon runs directly downwards and expands before its insertion upon a horizontal line at the base of the styloid process of the radius. At first the plane of the muscle is directed outwards and inwards; but lower down the outer surface becomes anterior and the inner posterior.

From the posterior cord of the brachial plexus (through the sixth cervical nerve), by branches from the musculo-spiral nerve which enter the upper part of the muscle upon its inner surface.

To flex the forearm. Its insertion at the lower end of the long arm formed by the radius makes it one of the few examples of the second order of lever when the muscle is used to raise only the weight of the forearm; but whatever advantage is obtained by the position of this insertion is lost by the extreme obliquity of the tendon. This obliquity (Introduction, page 300) will, however, add speed and range of movement and at the same time it will assist in drawing the articular surfaces of the elbow together and so give strength to the joint.

If the forearm be fully supinated, the contraction of the brachio-radialis will cause some pronation; and it is only when the forearm is in the position of full pronation that it will produce a slight supination. It is therefore incorrect to describe the muscle as a supinator. 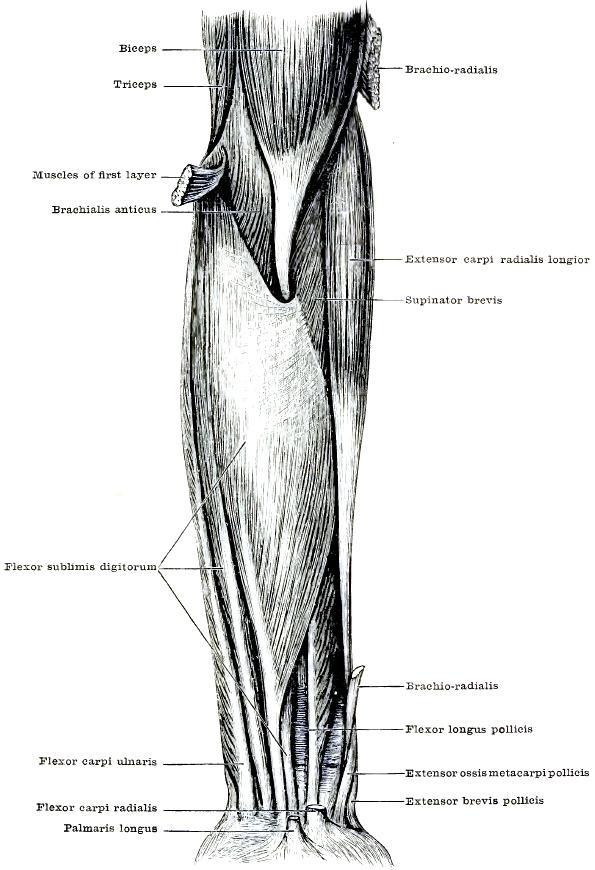 Front of the forearm.

In the upper arm, it has at its inner side the brachialis anticus, iin which it forms a deep groove and the musculo-spiral nerve and superior pro- funda vessels. Outside and behind lies the inner head of the triceps. Below, it rests on the upper border of the extensor carpi radialis longior. In the forearm it is covered, above by the deep fascia and superficial veins; below, by the extensor ossis metacarpi and the extensor brevis pollicis. Beneath it lie the extensor carpi radialis longior, the supinator brevis, the pronator radii teres, the flexor sublimis digitorum, the flexor longus pollicis, the radial vessels and nerve.

The brachio-radialis is sometimes absent. It may receive a slip from the brachialis anticus. It may give slips to various parts of the radius, to the carpal bones on the radial side of the hand, to the tendons of the extensor carpi radialis longior, the extensor ossis metacarpi pollicis, the flexor longus pollicis, or to the supinator brevis muscle.