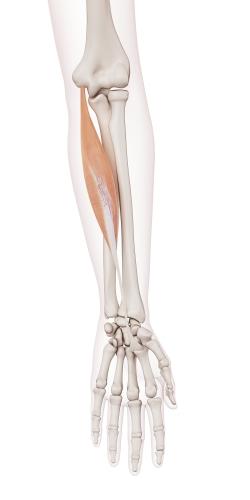 The flexor carpi radialis - named from its action as a flexor of the wrist and its position on the radial side of the joint - is flat and fusiform.

The front of the base of the second metacarpal bone ; and usually by a smaller slip into that of the third as well.

Its fleshy fibres are contained in an aponeurotic case which forms an elongated four-sided pyramid, the apex being at the internal condyle, and the sides consisting of the deep fascia and the intermuscular septa which intervene j between it and the adjacent muscles. The fleshy fibres converge downwards and somewhat outwards upon the back of the tendon which begins at the junction of the upper and middle thirds of the forearm, and is free soon after the middle of the forearm.

At the wrist the tendon passes through a special compartment external to the I feii tube formed by the anterior annular ligament. This compartment is bounded behind by the scaphoid bone and the groove upon the trapezium ; externally, by the tuberosity of the scaphoid bone and the ridge upon the trapezium ; and in front and internally by a thickening of the deep fascia of the forearm. It is lined I by a special synovial membrane.

From the outer and inner cords of the brachial plexus (through the sixth cervical nerve) by filaments from the median nerve which pass to its posterior surface in its upper third.

Superficially, the deep fascia and the superficial veins ; deeply, the llexor sublimis digitorum, the flexor longus pollicis, the median nerve, the wrist and lome of the carpal joints ; on the outer side of it lie the pronator radii teres and he radial vessels ; on the inner side it is in contact above with the palmaris longus.

The flexor carpi radialis may have a second origin from the tendon of he biceps or the radius, and its insertion may be extended to the base of the fourth metacarpal bone or to some of the bones of the carpus. It is sometimes absent.