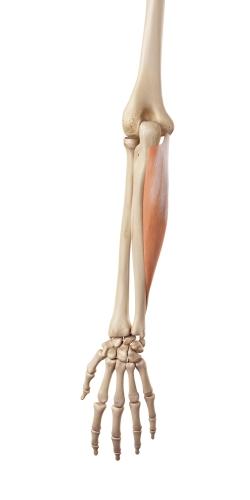 The flexor carpi ulnaris- named from its influence upon the wrist and its position - is a thick sheet of muscular fibre, somewhat fusiform in shape, which wraps round the convex ulnar border of the forearm.

The second head : from the inner surface of the olecranon process, and the upper two-thirds of the posterior border of the ulna.

The upper surface of the pisiform bone, beyond which fibres are continued to the unciform process, and the front of the base of the fifth metacarpal bone.

The origin of the upper head is tendinous, and that of the lower is partly fleshy, partly aponeurotic ; the aponeurosis from the posterior ridge of the ulna being common to it with the flexor profundus digitorum and the extensor carpi ulnaris, and being closely blended with the deep fascia of the back of the forearm. The two heads are united by a fibrous arch under which passes the ulnar nerve. From this tendinous and bony origin the fleshy fibres pass downwards and forwards in a penniform manner to be inserted into the posterior aspect of a tendon which appears on the front of the muscle a little above the middle of the forearm, and becomes free just above the wrist joint, where it lies superficial and internal to the anterior annular ligament at its insertion into the pisiform bone.

From the inner cord of the brachial plexus (through the eighth cervical and first thoracic nerves) by filaments from the ulnar nerve which enter the deep surface of the muscle above the middle of the forearm.

Superficially, the deep fascia and superficial veins ; deeply, the flexor | profundus digitorum, the ulnar vessels and nerve. Near the wrist the ulnar artery lies along the outer border of the tendon.

Its insertion sometimes extends to the anterior annular ligament, and occasionally it sends a slip to the base of the fourth metacarpal bone.