The flexor profundus digitorum- named from its action upon the fingers and jts relation to their superficial flexor - is a strong fusiform sheet of muscular fibres ,vhich wraps round the anterior and inner surfaces of the ulna, and divides below into four tendons for the fingers.

The front of the bases of the third phalanges of the four fingers.

Arising directly from the bones and fibrous structures which form the origin of the muscle, the fleshy fibres converge below upon the back of four Itendons, which, appearing about the middle of the forearm, become free at the ;apper border of the anterior annular ligament. That part of the muscle which is linserted into the index finger is separable from the rest of the muscle in nearly the whole of its extent ; the part to the little finger is also generally more separable than that to the other two fingers. As they pass beneath the anterior annular ligament, the tendons are invested by the common synovial sheath. At the meta- carpo-phalangeal joints they enter the vaginal sheaths belonging to their respective fingers. Opposite the first phalangeal joint each tendon passes through the opening formed by the splitting of the flexor sublimis tendon ; and on the palmar aspect of the second phalanx it passes over a slight elevation formed by the union lof the two halves of the companion tendon before they are inserted into the sides of the second phalanx. The deep tendon finally passes over the second phalangeal point, to be inserted into the front of the base of the third phalanx. In the palm of the hand the lumbricales (which will afterwards be described) arise from the tendons of the flexor profundus.

It is a powerful flexor of the third phalanges of the fingers. As with jhe superficial flexor, the extreme obliqiiity of the insertion of the tendons gives g-reat speed and range of movement, but increases the mechanical disadvantage ^ith which this muscle (being a representative of the third order of lever) must act. The slight elevation formed by the union of the two halves of each tendon of the lexor sublimis upon the second phalanx diminishes to a small extent the extreme Dbliquity of its insertion. After bending the third phalanx, the muscle will assist .n the flexion of the other phalanges and the wrist. 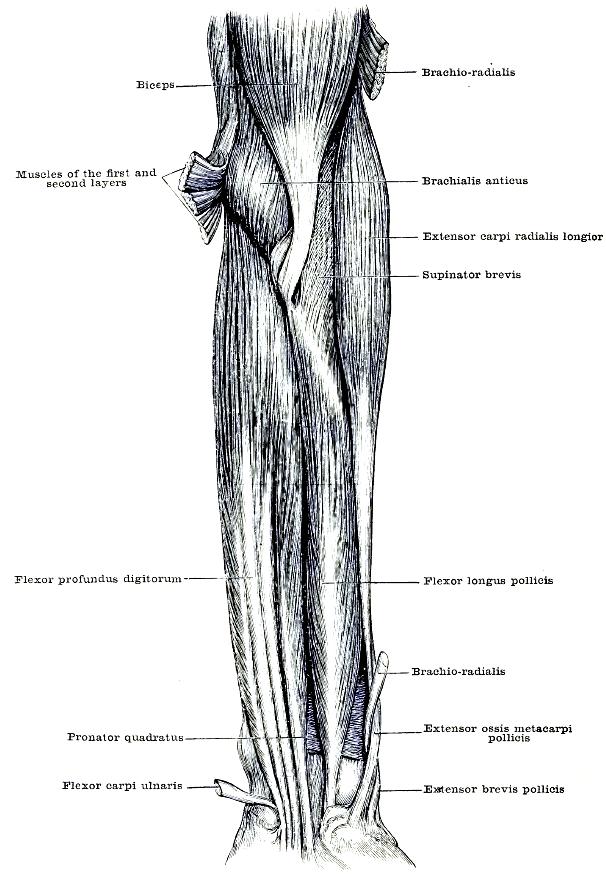 Front of the forearm: third layer of muscles.

Superficially, the flexor sublimis digitorum and flexor carpi ulnaris, |;he ulnar vessels, the median and ulnar nerves ; deeply, the pronator quadratus and 'ivrist joint. In the hand, it lies beneath the tendons of the flexor sublimis digitorum and the lumbricales, and upon the adductor of the thumb, the interossei muscles, |ind the deep palmar arch.