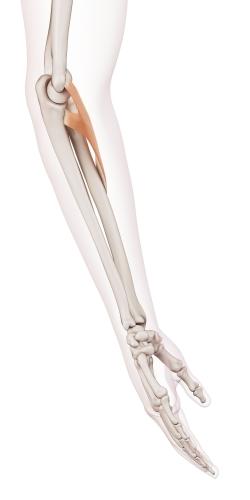 The pronator teres (Pronator radii teres), named from its action and somewhat cylindrical shape, is a thick ribbon-shaped muscle.

Second head : from the inner border of the coronoid process.

The rough impression on the middle of the outer surface of the radius.

The higher of the two heads, which is much the larger, arises partkj by a short tendon, and partly by muscular fibres, and is separated from the lowei head by a small tendinous arch through which passes the median nerve. The lower head, which lies concealed by the rest of the muscle, arises by a small iponeurotic band. The thick fleshy muscle passes obliquely downwards and outwards across the front of the forearm. Below the middle of its anterior surface begins the tendon of insertion, which expands and covers the whole of the muscle for a short distance before it is inserted by a strong fibrous band into the special impression for it upon the most prominent portion of the outward curve of the radius.

From the outer and inner cords of the brachial plexus (through the sixth cervical nerve) by means of filaments derived from the median nerve just before it passes through the arch between the two heads. These filaments enter the muscle at its deep surface a short distance above the middle of its outer border.

To pronate the forearm. In supination, the tendon is to some extent wrapped round the radius, as the tendon of the biceps is in pronation. In contraction the muscle, so to speak, unwraps itself and so causes the radius to revolve around the axis, which passes through the middle of its head and the lower end of the ulna. Its insertion into the convexity of the curve of the radius places the line of the muscle as far as possible from this axis, and so gives it some mechanical advantage. On the other hand, the obliquity of its insertion diminishes ; the power of the muscle, and is one of the causes which make pronation a more j feeble movement than supination. It will also assist in the flexion of the forearm.

Superficially, the deep fascia and superficial veins, the radial vessels and nerve, and, lower down, the brachio-radialis (supinator longus) and radial extensors. Deeply, the brachialis anticus, flexor sublimis digitorum, supinator brevis, and the median nerve. By its outer border it forms the inner boundary of the bend of the elbow, and by its inner border it is in contact with the flexor carpi radialis.

The pronator radii teres frequently extends at its origin for some distance further up the internal condylar ridge. It may also receive a separate head from the internal intermuscular septum, the inner border of the humerus, or an abnormal supracondylar process ; sometimes also from the biceps or brachialis anticus. This third head bridges over the brachial artery and median nerve.