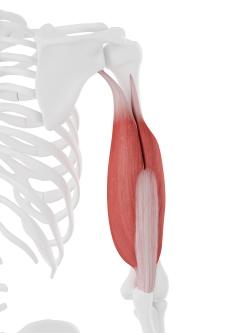 The triceps extensor cubiti (french: Triceps brachial), named from its three heads and its action - formi a thick fusiform sheet wrapping round the posterior surface of the humerus in iti whole length.

The long head arises from the lower edge of the glenoid cavity anc the axillary border of the scapula for one inch below it.

The posterior part of the upper surface of the olecranon process and on either side by aponeuroses which are continuous with the deep fascia and the back of the forearm.

The long head forms a strong fusiform muscular band, arising b tendinous fibres which blend with the lower part of the capsule of the shoulde. joint. The surfaces of the band at first look inwards and outwards. The tendo:l of origin extends for some distance further on the inner than on the outer surfacf, As the muscular band passes downwards, it twists upon itself so that what was tb internal surface now becomes posterior, and the external surface becoming thj anterior is applied to the back of the rest of the muscle. Upon this anterki surface the common tendon of insertion begins as a broad aponeurosis about thre| inches from the scapula, and receives the fleshy fibres of the long head in penn:! form fashion chiefly upon its upper border and posterior surface. These fleshj fibres are continued as a thick band along the inner border of this common tendoij and terminate in a blunt point a little below the junction of the middle and low(j thirds of the arm. |

The external head arises by fleshy fibres which are inserted in penniforil fashion into the outer border of the common aponeurosis. The lowest of these fibr( arise from a tendinous arch which bridges over the musculo-spiral nerve.

The internal head, which is much stronger than the outer, forms a thici triangular sheet, wrapping round the back of the bone, and arising also from til back of the intermuscular septa on either side. The apex of this triangle extend upwards along the lower border of the musculo-spiral groove to a point juj below the insertion of the teres major. Its fleshy fibres pass downwards arj somewhat backwards to the broad aponeurosis, which, after receiving the flesl{ fibres from the outer and long heads, completely covers the whole of the posteriij surface of the muscle in the lower third of the arm. A few fleshy fibres of th] head are inserted directly into the bone, and the adjacent posterior ligament ; tlj latter slip is sometimes called the subanconeus.

From the posterior cord of the brachial plexus (through the seventh and eighth cervical nerves) by means of the musculo- spiral, which supplies branches to the long and inner heads in the first part of its course ; and numerous other branches to the inner and outer heads while passing through the musculo-spiral groove.

To extend the elbow joint, the muscle acting as a lever of the first order, at a very great mechanical disadvantage on account of the short distance which intervenes between the olecranon process and the axis of the elbow joint ; but at the same time with a great gain in speed and range of movement. Hence this muscle is the chief agent in movements of the arm in which great speed is attained, such as in throwing a stone or striking a blow. The long head has some influence as an adductor of the shoulder joint ; it has also a supple- mentary ligamentous action upon that joint similar to that of the coraco-brachialis by holding the head of the humerus in close contact with the glenoid cavity. As it passes over both the shoulder and the elbow joints, the long head enables the powerful abductors of the shoulder to exert a peculiar influence upon the extension of the elbow joint. If it were merely a passive ligament, the long head would extend the elbow whenever the humerus was abducted by the deltoid muscle. As, jhowever, the long head contracts at the same time with the deltoid, we have an j apparatus by which, so to speak, a double rapidity of extension is secured for the |elbow joint. This attachment, therefore, of the long head of the triceps to the scapula is the chief cause for the rapid movements of the lower end of the forearm which are made use of in throwing and striking.

Acting from below, the triceps will extend the upper arm upon the forearm, as in the use of the parallel bars, and in many other gymnastic exercises.

The long head lies behind the subscapularis, teres major, and latis- simus dorsi, in front of the teres minor, with the dorsalis scapulae vessels upon its posterior, and the posterior circumflex vessels and the circumflex nerve upon its anterior border. Lower down, the posterior surface of the muscle is only separated from the integuments by the deep fascia ; in front lie the brachialis anticus, brachio- radialis (supinator longus), extensor carpi radialis longior, and coraco-brachialis, with the superior profunda vessels and musculo-spiral nerve. A small bursa intervenes between the tendon and part of the olecranon process. The muscle is also in relation with the shoulder and elbow joints.

The internal head sometimes arises as high as the greater tuberosity. An additional slip is occasionally received from the capsule of the shoulder joint, the coracoid process, or the tendon of the latissimus dorsi. A slip of muscle is frequently separated from the lower border of the internal head, and, passing from the inner condyle to the olecranon, bridges over the ulnar nerve.