The pectineus - named from pecten (=pubes) on account of its origin from the bone - is a quadrilateral sheet.

The back of the femur in a vertical line about two inches long, leginning just behind the lesser trochanter.

The origin is by fleshy and tendinous fibers intermingled. The fibers then run parallel to one another to a tendinous insertion between the iliacus and the adductor brevis. The direction of the surfaces changes so that that which looks forwards above is directed outwards below.

From the lumbar plexus (through the third and fourth lumbar nerves), by a branch of the anterior crural nerve, which, after passing behind the femoral artery and vein, enters the muscle about the middle of its external border. When there is an accessory obturator nerve, it passes over the brim of the pelvis supply this muscle at the upper part of its anterior surface. Occasionally the muscle receives a branch upon its deep surface from the anterior division of the obturator nerve.

To flex and at the same time adduct the thigh; as, for example, in crossing the legs, when one thigh is brought forwards and inwards to place it in font of the other thigh. It is also a slight external rotator. Its predominant action is that of flexion, as is indicated by the fact that it receives the same nerve supply as the sartorius and ilio-psoas. The tendency which it has to adduct during flexion is counteracted by the slight abduction produced by the sartorius. They will together produce a slight external rotation, as may be observed during the advance of the leg in walking.

In front, the pubic portion of the fascia lata, the femoral and jrofunda vessels and at its insertion the psoas and iliacus muscles; behind, the ductor brevis, obturator externus, hip joint and obturator nerve.

Sometimes a slight blending of the lower fibers of the pectineus with the adductor longus has been observed. 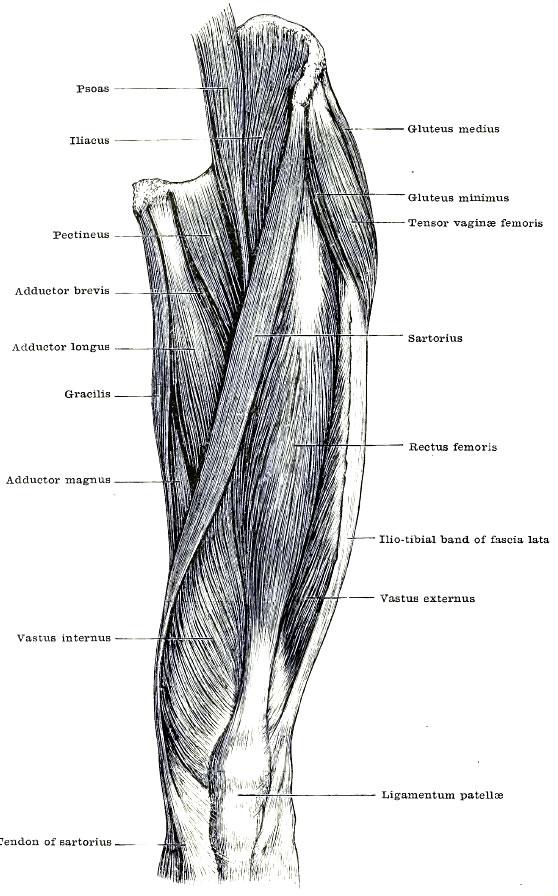