The interossei - named from their position between the metacarpal bones - are seven in number, three being palmar and four dorsal. They are small muscles, of. penniform or bipenniform structure. Both sets are easily exposed to view by ai deep dissection in the palm, but the dorsal set is alone visible in the back of the hand. 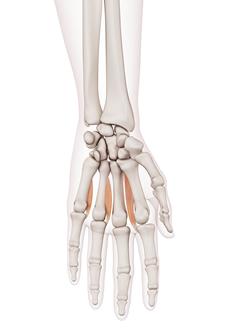 The three palmar interossei are fusiform in shape.

By small tendons into the aponeuroses of the extensor tendo: upon the back of the first phalanges of the index, ring, and little fingers ; and the adjacent portion of the side of each first phalanx near to its base ; the fii being attached to the ulnar border, and the second and third to the radial border of their fingers.

Fleshy fibres arising along the whole length of the metacapal bone are inserted in penniform fashion upon the tendon, which, beginning on the unattached border of the muscle near the middle of the interosseous space, becomes free just above the metacarpo-phalangeal joint, and passes beneath the deep transverse ligament which separates it from the tendon of the lumbricalis muscle.

At this place a small bursa separates the tendon from the deep transverse igament, and the lateral ligament of the metacarpo-phalangeal joint.

From the inner cord of the brachial plexus (through the bighth cervical nerve), by small filaments which, coming from the deep branch of the ulnar nerve, pass into the upper part of the muscles upon their anterior aspect. 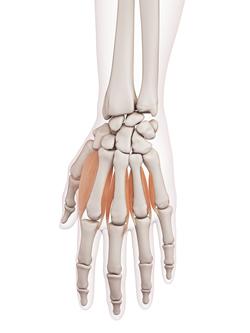 Of the four dorsal interossei, the first forms a thick triangular sheet, while the other three are fusiform and prismatic.

From the five metacarpal bones, each muscle arising from the adjacent jmrfaces of the two bones bounding an interosseous space.

Into the sides of the aponeuroses of the extensor communis liigitorum tendons ; and the adjacent parts of the first phalanges.

The fleshy fibres arise from the adjacent surfaces of the metacarpal bones in bipenniform fashion, and converge upon a tendon which, beginning about ihe middle of the interosseous space, becomes free just above the metacarpo- phalangeal joint, and then passes beneath the deep transverse ligament to its nsertion into the side of the aponeurosis, and into the upper part of the border of lihe first phalanx.

From the inner cord of the brachial plexus (through, the eighth cervical nerve), by branches from the deep division of the ulnar nerve which enter the muscles at the upper part of their anterior aspect.

Action of the interossei muscles

Firstly, the common action of all the interossci is to flex the first phalanges ; and to extend the second and third. Their power of flexion depends upon their insertion into the sides of the first phalanges as well as the edges of the aponeuroses by which the backs of these phalanges are covered. The extension of the second and third phalanges depends upon the fact that the portion of the aponeurosis into which each of them is inserted is continued downwards to the bases of these phalanges. A good example of the action of these muscles and of the lumbricales is given in the movements of the fingers which hold the pen in writing. In forming the light upstroke it will be seen that flexioi: of the first, accompanies the extension of the second and third phalanges. This movement is due to the contraction of the lumbricales and interossei. On the other hand, the thick downstroke is formed by the extension of the first, and tht flexion of the second and third phalanges ; this strong movement being due to the action of three powerful muscles, the extensor communis, the flexor sublimis and the flexor profundus digitorum. Secondly, the palmar interossei adduct th( index, ring and little finger towards the middle line of the hand which passe; through the middle finger. Thirdly, the dorsal interossei abduct the index, middL and ring fingers from the middle line of the hand. As the middle finger can bi drawn either to the radial or ulnar side from the middle line of the hand, it ha two dorsal interossei to abduct it. The first dorsal interosseous muscle will als' assist in adducting the thumb.

On the palmar surface of the interossei, separated from them b i the deep layer of fascia, lie the flexor profundus digitorum tendons and the lumbri cales, the adductor and part of the short flexor of the thumb, the deep palma arch above, and the deep transverse ligaments below ; behind, lie the tendons of the extensor communis digitorum and extensor indicis, separated from the dorsi interossei by the deep dorsal fascia.

Sometimes the dorsal interossei receive small accessory heads from the posterior carpal ligaments, the lower end of the radius, or the adjacent deep fascia, part of the first dorsal interosseous has been seen running separately from the front of it, metacarpo-phalangeal joint of the thumb to the tendon of the first lumbricalis. Occasionally the second dorsal interosseous is inserted upon the ulnar side of the index finge! so as to resemble the same muscle in the foot.