The lumbricals muscles (french: muscles lombricaux)- named from their resemblance to earth-worms (= lumhrici) - are four small muscles of a fusiform shape.

The two outer ones from the outer side of the first and second tendons of the flexor profundus digitorum ; the two inner from the adjacent sides of the second and third, and third and fourth tendons of the flexor profundus digitorumi respectively. All four are attached to the palmar aspect of the deep flexor, and their origin begins at the lower border of the anterior annular ligament. 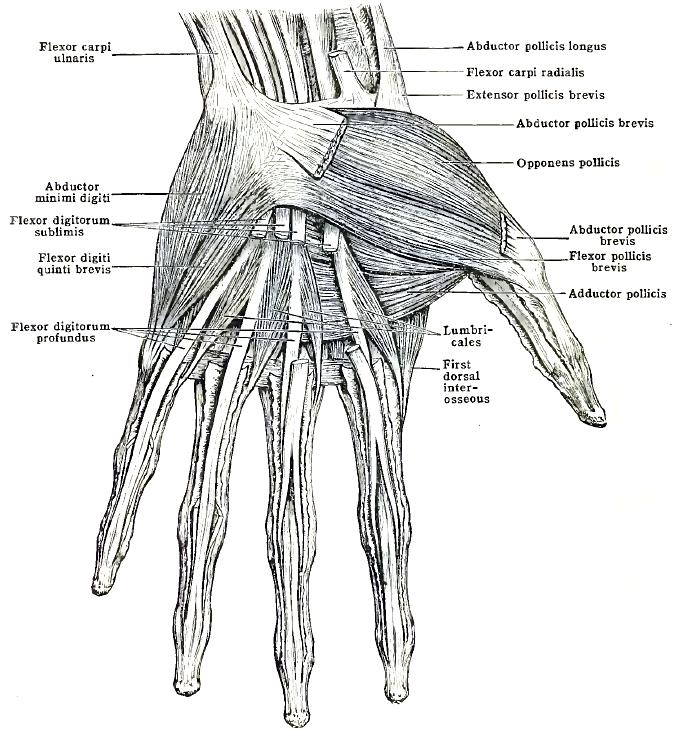 The deeper muscles of the palm of the hand.

The aponeurosis of the extensor communis digitorum tendon on the radial side of the first phalanx of each of the four fingers.

Arising fleshy from the tendons of the deep flexor, the fibres converge upon a small tendon which becomes free a short distance above the metacarpophalangeal joint. The tendon passes in front of the deep transverse metacarpa ligament, below which it expands, and is attached to the border of the extenso: tendon.

From the outer and inner cords of the brachial plexus ; the first and second receiving small filaments from the digital branches of the medial nerve, which enter the muscle near the radial border in the middle third of thei palmar aspect. The third and fourth lumbricales are supplied by filaments o the deep branch of the ulnar nerve, which enter their respective muscles in th middle third of their deep surfaces.

Their chief action will be to flex the first phalanges upon themetaj carpal bones ; and at the same time to extend the second and third phalange! by their traction upon the sides of the extensor aponeurosis which covers the bac. of each of the first phalanges. In this action they assist the interosseous muscles but the lumbricales have this advantage over them, that when the second and thiri phalanges are flexed by the flexor sublimis and profundus, the lumbricales will flex the first phalanges with increased force, inasmuch as the tendons from which the muscle arise have been retracted, whereas the origins of the interossei are practically fixecj The first and second lumbricales will act feebly as abductors of the index and middl, fingers ; the third and fourth as adductors of the ring and little fingers. They will also have some influence, together with the interossei, upon the aponeuroses of th extensor communis digitorum tendons in binding them down upon the first phalanges. In this way they perform for the dorsal tendon a similar function that which is exercised by the ligamentum vaginale upon the two palmar tendons.

The fourth lumbricalis is sometimes absent. They may vary in their origins, sometimes arismg from one, and sometimes from two adjacent tendons. Occa- sionally one may arise from the flexor longus poUicis tendon. They may be inserted into the ulnar side of a finger, or into the adjacent sides of two fingers.