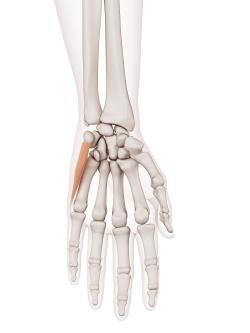 The abductor minimi digiti - named from its action - is fusiform and somewhat flattened.

Arising by short tendinous fibres, it soon forms a flat fleshy mass I which contracts slightly below, and just before its insertion, having again become tendinous, it is for the most part attached to the first phalanx, but it also sends a Ismail slip backwards to the extensor aponeurosis.

From the ulnar nerve through the eighth cervical nerve. It receives small filaments at the outer and deep aspect, usually from the deep palmar division of the ulnar nerve.

To abduct, and at the same time flex, the metacarpo-phalangeal joint of the little finger ; it will also assist, like an interosseous muscle, in the extension of the second and third phalanges.

Superficially, the hypothenar part of the palmar fascia and the palmaris brevis ; deeply, the flexor brevis and opponens minimi digiti. Upon its radial border are placed the deep palmar branches of the ulnar artery and nerve.

Muscles of the hypothenar eminence