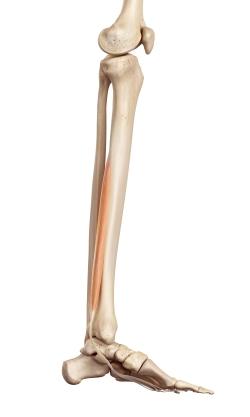 The flexor digitorum longus (french : muscle long fléchisseur commun des orteils) - named from its being the longer of the two flexors of the toes - is a fusiform sheet.

The under surface of the base of the ungual phalanx of each of the four outer toes.

Arising fleshy from the tibia and adjacent fasciae, the fibres pass in a penniform manner into the front and outer side of a tendon which, beginning about the middle of the leg, gradually becomes thicker and stronger, and receives its last fleshy fibres about two inches above the ankle joint. It then passes beneath the internal annular ligament in a compartment posterior and external to that for the tibialis posticus. Thence it runs downwards, forwards, and outwards beneath the first layer of the sole muscles, and, after having received fleshy fibres from the accessorius pedis and a small tendinous slip from the tendon of the flexor longus hallucis, divides, about half-way between the tuberosity of the calcaneum and the heads of the metatarsal bones, into four tendons. These enter the thecae of the four outer toes, and each tendon passes through the splitting of the tendon of the flexor brevis digitorum to its insertion upon the under surface of the base of the third phalanx. The lumbricales arise from its tendons in the sole of the foot.

From the posterior tibial nerve by branches which enter the superficial aspect of the muscle near its outer border about the middle of the leg.

Superficially, in the leg the soleus, posterior tibial vessels and nerve; in the foot, the abductor hallucis and flexor brevis digitorum. Deeply, lie the tibialis posticus in the leg, and in the foot the tendon of the flexor longus hallucis, the accessorius, and the muscles which form the third layer of the sole of the foot.

An accessory head sometimes arises in the leg from the fibnla, the tibia,, or the deep fascia of the leg ; it may join the rest of the muscle in the leg, or in the sole. Some of the tendons to the toes may be wanting ; more often they are increased in number and supply the deficiencies of the flexor brevis digitorum, and especially by sending slips to the little toe.