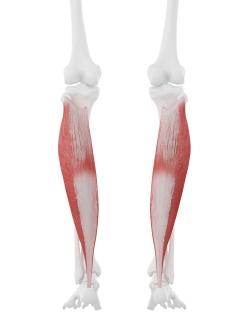 The soleus (french : muscle soléaire) - named from solea, the Latin for a sole-fish, because of the resemblance of the muscle to this flat fish - is a thick, fusiform sheet.

By a strong aponeurosis which blends with the anterior surface of the tendon of the gastrocnemius, and forms the tendo Achillis.

The muscle arises partly by fleshy fibres and partly by a strong aponeurosis, which lies in front of the fleshy fibres, and is especially noticeable in the neighbourhood of its tibial attachment. From the tibia and fibula the fibres pass in a bipenniform arrangement downwards and towards the middle line, and after a very short course, not exceeding two inches in length, they blend with the tendon of insertion which begins near the upper part of the origin of the muscles, and in cross-sections of the muscle resembles in shape the letter T ; one part of it forming a broad aponeurosis upon the posterior surface of the muscle, the other part a strong tendinous septum which passes forwards from the middle of the broad aponeurosis above mentioned, so as to separate the fleshy fibres into two portions. About the junction of the middle and lower thirds of the leg, the tendon of insertion joins by its posterior aspect with that of the gastrocnemius muscle, but upon its anterior aspect and sides it receives fleshy fibres nearly as far down as the back of the ankle joint. The tendo Achillis is a strong rounded band of tendon about five-eighths of an inch from side to side, and three- eighths of an inch from before backwards ; it is narrowest at the level of the ankle joint, and expands slightly before it is inserted into the lower part of the posterior surface of the calcaneum. A bursa intervenes between the tendon and the smooth upper part of the posterior surface of this bone.

The chief action of the combined gastrocnemius and soleus is to extend the ankle joint. It is an extremely powerful muscle, as it acts with considerable mechanical disadvantage. The lever by means of which it acts may be best described as one of the first order ; the lever being that part of the foot which lies between the heel and the heads of the metatarsal bones, the ankle being the fulcrum ; a pressure equal to the weight of the body being exerted by the ground at the anterior extremity of the lever ; and the arm, at the end of which the muscle acts, being the comparatively short distance between the back of the heel and the centre of the ankle joint. When the ankle joint has been completely extended, this muscle will tend to adduct slightly the foot, and to invert the sole, this movement being carried out in the joint between the astragalus and calcaneum. Besides extending the ankle, the gastrocnemius will assist in flexing the knee joint. The chief object, however, which appears to be gained by the femoral attachment of this muscle is the addition to the rapidity of extension of the foot. Like some of the other long muscles which pass over two joints, the gastrocnemius, if it were an inextensible ligament, would cause extension of the ankle as soon as the knee was straightened by means of the great quadriceps muscle. Seeing, however, that during the contraction of the quadriceps the gastrocnemius is at the same time acting, it follows that the rapidity and amount of the extension of the ankle joint is almost doubled. By these means we obtain that rapid and powerful contraction which gives the spring to the body in leaping and running. We may see also how enormously strong the tendon Achillis must be, as it has not only to bear the contraction of the gastrocnemius and soleus, but the additional strain thrown upon it by the simultaneous action of the quadriceps extensor of the knee. The soleus will assist in the extension of the ankle, and will even be able to perform this movement somewhat feebly by itself, when in extreme flexion of the knee joint the gastrocnemius is so relaxed as to be almost powerless. It is much stronger than the gastrocnemius, as may be inferred from the enormous number of short fibres by which it is formed. At the same time, however, as it only passes over the ankle and calcaneo-astragaloid joints, the range of its movements is very short.

A second soleus is sometimes formed beneath the normal muscle, and more or less separate from it. It is usually inserted into the calcaneum or internal annular ligament.