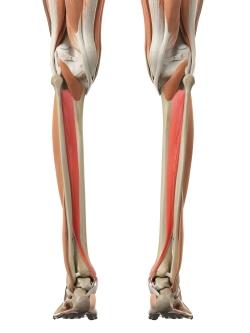 The tibialis posterior (french : muscle tibial postérieur) - named from its position in the back part of the leg and its origin from the tibia - is a thick fusiform sheet.

A strong bipenniform muscle, the central tendon of which, lying upon the middle of the back of the muscle, begins about the middle of the leg, and passes downwards and inwards upon the back of the muscle, receiving its last fleshy fibres about an inch above the ankle. Having passed inwards beneath the tendon of the flexor longus digitorum, it enters the innermost groove on the back of the internal malleolus, and is contained in a synovial sheath which accompanies it to its insertion upon the scaphoid bone. From this insertion strong fibrous bands radiate backwards, outwards, and forwards to the tarsal and metatarsal bones, being initially blended with the ligaments by which these bones are held together. This muscle, which is very strong, is contained, so to speak, in a four-sided prismatic case formed in the front by the interosseous membrane ; at the sides, by the opposing surfaces of the tibia and fibula ; and behind, at a distance of nearly half an inch from the interosseous membrane, by the intermuscular septa which separate the muscle from the flexor longus hallucis and the flexor longus digitorum.

Just above its insertion into the tuberosity of the scaphoid bone, the tendon often contains a sesamoid bone.

From the posterior tibial, which sends branches forwards to the back of the muscle in the upper third of the leg.