Anatomy of the Deltoid muscle 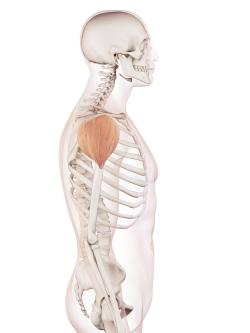 The deltoid muscle (French: muscle Deltoïde; latin : deltoideus) is fleshy from the lateral border and upper surface of the acromion and from the ventral border and upper surface of the lateral third of the clavicle, and tendinous from the spine of the scapula. Some fibre-bundles also at times arise from the deep fascia of the muscle where it overlies and is fused to the fascia of the infraspinatus muscle near the spine.

Insertion of the deltoid muscle

Into the deltoid tuberosity of the humerus by a strong tendon arising from numerous tendinous bands within the muscle.

Structure of the deltoid muscle

In structure the deltoid muscle is complex. Three portions may be recognised: - a clavicular, an acromial, and a spinous. The first and last are composed of long fibre-bundles which take a slightly converging course and are inserted by aponeurotic tendons respectively on the front and back of the V-shaped area of insertion of the muscle. The acromial portion, on the other hand, is multipenniform in composition. Four or five tendinous expansions descend into the muscle from the acromion, and three up into the muscle from the tendon of insertion. From the acromion and from the descending tendinous processes fiber-bundles run to be inserted on the sides of the ascending processes and into the tendons of insertion of the clavicular and spinous portions of the muscle.

Nerve-supply of the deltoid muscle

The axillary (circumflex) nerve passes across the costal surface of the muscle near the tendon of insertion and gives off rami which enter lateral to the middle of the muscle. The nerve fibres are derived from the (foruth), fifth, and sixth cervical nerves.

Action of the deltoid muscle

When the whole muscle contracts, the arm is abducted (raised lateralhO to a horizontal position. When the clavicular and acromial parts act, the arm is raised and flexed (brought forward toward the chest). When the acromial and spinous parts act, the arm is raised and extended (carried toward the back), but in this instance the arm is not brought to a level with the shoulder-joint, but only about 45Â° from the hanging position. The inferior part of the serratus anterior and the trapezius act in conjunction with the deltoid in abduction. Abduction is greatest when the arm is rotated lateralward. The ventral portion rotates the arm medially, the dorsal portion laterally. When the arm is fixed, the deltoid tends to carry the inferior angle of the scapula toward the spinal column and away from the thorax.

Relations of the deltoid muscle

On its ventral border the deltoid is in contact with the pectoralis major muscle. Near the clavicle the cephalic vein and a small artery pass between the two muscles. Its dorsal border is continued into a dense fascial sheet which overlies the infraspinatus muscle. Its tendon of insertion passes between the biceps and triceps muscles. The deltoid overhes the coracoid process and upper extremity of the humerus, the coraco-olavicular and coraco-acromial hgaments, and the insertions of the supraspinatus, infraspinatus, and teres minor muscles, the origins of the biceps and coraco-brachiahs, and a part of the long and lateral heads of the triceps. Beneath it run the posterior circumflex artery and axillary (circumflex) nerve.

Variations of the deltoid muscle

The clavicular portion is frequently separate from the rest of the muscle. The three portions may be distinctly separate - a condition normal in some of the lower mammals. The clavicular and acromial portions have been found missing. The deep portion of the muscle may be separated as a distinct layer and inserted either into the capsule of the joint or into the humerus. Accessory fasciculi may pass into the muscle from the fascia over the infraspinatus and from the vertebral and axillary borders of the scapula. Not infrequently fasciculi are con- tinued into the muscle from the trapezius - a condition normal in animals with ill-developed clavicles. An accessory tendon of insertion may extend to the radial side of the forearm. Bundles of fibres from the axillai'y border of the scapula have been seen to cross the deep surface of the deltoid and be inserted into the deltoid fascia. The deltoid may be fused with neighbour- ing muscles, the pectoralis major, trapezius, infraspinatus, brachialis, brachio-radiahs.

from Morris's Treaty of human anatomy.