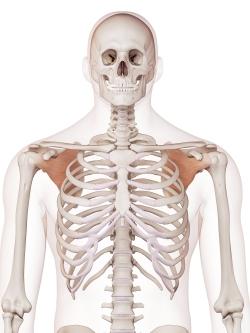 The subscapularis muscle (French: muscle sous-scapulaire)- named from its position beneath the scapula - is a thick triangular and somewhat multipenniform sheet.

The lesser tuberosity of the humerus, and the part of the shaft immediately below it ; the front of the capsular ligament of the shoulder joint.

Its origin is by fleshy fibres from the surface of the bone, and also by bipenniform bundles from the upper and lower surfaces of three or four septa I which are attached to the transverse ridges upon the venter scapulae, so that the whole muscle has a multipenniform arrangement. The fibres converge upwards and outwards upon a strong tendon which is hidden by fleshy fibres to within an inch of its insertion, the lower part of which is also fleshy. A bursa intervenes between the tendon and the base of the coracoid process, and is usually in connection with the shoulder joint.

From the posterior cord of the brachial plexus (through the fifth and sixth cervical nerves), by the short and part of the lower subscapular nerves. They enter the front surface of the muscle, the former near its upper, the latter near its outer border.

It is the chief internal rotator of the humerus; at the same time it adducts it after it has been elevated. It also has an important influence in strengthening the shoulder joint by drawing the head of the humerus towards the glenoid cavity.

Its anterior and internal face forms the greater part of the posterior wall of the axilla, and is in contact with the serratus magnus, the short head of the biceps, and the coraco-brachialis, the axillary vessels with many of their branches, the brachial plexus and its branches, the lymphatic glands and vessels ; its outer border lies in contact with the teres major, the posterior circumflex and dorsal scapula vessels, and the circumflex nerve ; behind lie the long head of the triceps and the teres minor muscle, and the bursa which intervenes between its tendon and the, capsule of the shoulder joint.

Occasionally a separate slip arises from the axillary border of the scapula, and is inserted into the capsule of the shoulder joint or into the humerus.